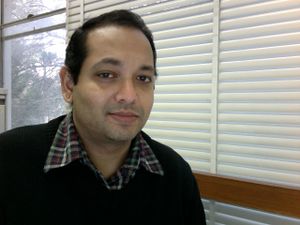 Very small amounts of polymers to a Newtonian fluid like water can lead to dramatic changes in flow behaviour. For instance, dissolved polymers can reduce turbulent friction. Polymeric additives can further make filaments of the solution more elastic and resist stretching and breakup; this is useful in controlling splattering of ink-drops in inkjet printing. I am currently developing models that relate flow-induced stresses in dilute solutions of polymers to the molecular characteristics of these long-chain molecules. 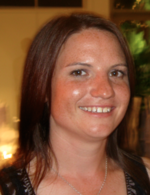 Sarah uses simulations to understand how form determines function in flagella, which are filamentous propellers employed by many swimming microorganisms. She is specifically interested in bacterial flagella. Studies elsewhere have demonstrated that even untwisted flexible microfilaments are capable of generating propulsive thrust. However, Sarah has shown that an intrinsic helicity leads to more regular operating characteristics. She is currently exploring flagellar propulsion in microorganisms with single, and multiple filaments, and how such filaments are used for steering near walls.

Amarin is developing a new technique in collaboration with James Friend and Leslie Yeo to investigate the elastic properties of low-viscosity complex fluids. Liquid filaments have been used in recent years to impose extensional flows, and studying their dynamics can reveal a lot about the response of fluids to stretching flows. Thus far however, these studies have been restricted to fluid of high viscosity. Amarin uses surface acoustic waves to create liquid bridges from tiny micro-droplets so that inertial instabilities are suppressed for long enough to get reliable observations even on fluids like aqueous solutions or suspensions. This technique is being used to examine thin polymer solutions and suspensions of microbial swimmers. 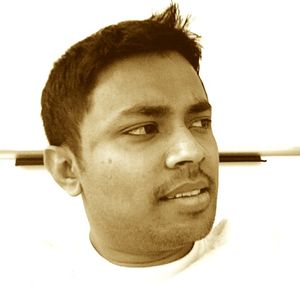 Electrospinning is a technique to generate polymeric nanofibers by taking advantage of distinctive flow instabilities in electrified jets of polymer solutions. The behavior of such jets and their stability is governed by a complex interaction between the imposed electric field, the motion of surface charges on jets, the hydrodynamics of the jet and its ambient fluid, and the viscoelasticity induced by polymer molecules deforming in the flow. Much of this process is poorly understood. The overall goal of Siddharth's work is to model the relationships between the flow behavior of slender electrified viscoelastic filaments on the one hand, and key physical properties and operating parameters on the other. The results of the analyses and computer simulations will be validated against experimental data available in literature. Siddharth is a PhD candidate at the IITB-Monash Research Academy, and is jointly supervised by Ravi Jagadeeshan at Monash University, and Rochish Thaokar and P Sunthar at IIT Bombay.

Ramesh use simulations to investigate how hydrodynamics affects the adhesion of small particles such as viruses or cells to surfaces.

Ramesh is a PhD candidate at the IITB-Monash Research Academy, and is jointly supervised by Ravi Jagadeeshan at Monash University, and Rochish Thaokar and P Sunthar at IIT Bombay.

We have several open postgraduate positions open on the following theoretical and computer-simulation oriented projects.

Lisa and Cameron are developing methods to analyze images of motile bacteria at the edge of growing colonies to understand how such colonies spread rapidly over surfaces.

Gopesh is modeling the dynamics of liquid bridges of suspensions of motile organisms to predict their thinning and breakup.