We have recently published a review in Trends in Pharmacological Sciences describing the design, testing, and use of RASSLs: Scearce-Levie et al, (2001) Engineering Receptors Activated Solely by Synthetic Ligands (RASSLs). Trends Pharmacol. Sci. 22:414–420.

Below is a general discussion of RASSL development.

Research in the Conklin Lab is focused on the molecular basis of signaling by G protein-coupled receptors. We use genetic engineering techniques to create new G proteins and receptors in order to identify the functional domains of these signaling molecules (1) and redirect hormonal signals (2) . Our primary project is to develop new receptors that can be used as molecular "switches" to regulate growth and secretion in transfected cells and transgenic mice.

G protein signaling plays a crucial role in many physiologic processes that are best studied in vivo, such as cell proliferation, hormone secretion, neurotransmission, heart rate control, and smooth muscle contraction. Current studies of these physiologic processes are limited by the fact that we lack control over the effects of endogenous hormones and hormone receptors. To control receptor signaling we are engineering G protein-coupled receptors in an effort to make them respond exclusively to the drug (synthetic small molecule ligand), but not to the natural ligand. These receptors are designated RASSLs, an acronym for "Receptor Activated Solely by a Synthetic Ligand." We are particularly interested in using a RASSL to control hepatic and hematopoietic proliferation since we would like to induce a proliferative amplification of cells that have been genetically modified for the purposes of gene therapy, or tissue engineering.

G protein-coupled receptors form a large family of evolutionarily related proteins. The natural ligands for G protein-coupled receptors are either peptides or smaller non-protein molecules. The binding sites for peptides tend to be in the extracellular loops of the receptor, while those for small molecules tend to be in the transmembrane domains of the receptor (3) (see Fig. 1A). Presumably, the transmembrane domain binding sites are only accessible to the small molecule drugs while the extracellular loops can accommodate binding by larger molecules such as peptides. Many peptide-activated G protein-coupled receptors can also be activated by small molecule drugs (Fig.1A). This offers the opportunity to mutate peptide receptors in ways that selectively inhibit the binding of peptides while maintaining high-affinity binding of synthetic drugs (see Fig.1B). 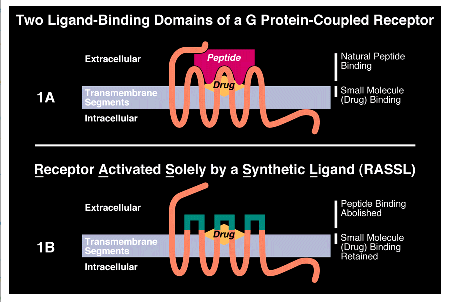 We are using the kappa opioid receptor (KOR) to engineer the first prototype RASSL because there are several structurally unique small molecule agonists. The KOR is a member of the opioid receptor family that also includes the mu and delta opioid receptors. The mu receptor is thought to be responsible for the pain relief, respiratory depression, and addictive effects of opiates. Several KOR agonists are available clinically (pentazocine or butophanol) or for research (spiradoline, U50488) that do not cause respiratory depression or addiction. The natural ligand for the KOR, dynorphin, is found in peripheral nerves that penetrate most organs. Therefore, it will be critical to engineer the KOR to be unresponsive to dynorphin, thereby creating a RASSL. Otherwise, endogenous dynorphin could cause unregulated signaling in tissues which could result in such undesired effects as cardiac arrythmias (if expressed in the heart), or uncontrolled proliferation (if expressed in other tissues).

The KOR can be made into a RASSL because its natural ligand has a different binding site than the small molecule drugs, a characteristic of several peptide receptors (3). In collaboration with Drs. Huda Akil and Fan Meng (University of Michigan) we have identified several KOR mutants with some of the characteristics of a RASSL. In one prototype RASSL, dynorphin binding and signaling is decreased by 1500- to 2000-fold. Binding and signaling by several small molecule drugs is unaffected in the prototype RASSL (as compared to the wild-type KOR). We have expressed one prototype RASSL in transgenic mice using the tetracycline transactivator system (see below), and have been successful in regulating heart rate with KOR agonists (a known effect of this signaling pathway). The KOR based RASSL causes marked proliferation in tissue culture (Rat 1a cells), and we are currently assessing its ability alter proliferation of hematopoietic cells in mice.