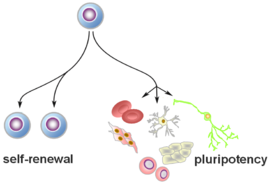 Human pluripotent stem cells (hPSCs) represent a valuable system to study cellular processes and disease mechanisms in phenotypes of biomedical interest and to derive cells and tissues for regenerative medicine and cell therapy. Neural differentiation of human stem cells represents a promising avenue to derive specific neuronal and glial phenotypes for potential cell replacement in the therapy of nervous system disease. Among others, therapies are being investigated for degenerative neurological disorders such as Parkinson’s and Huntington’s disease, for glial disorders such as multiple sclerosis or for trauma conditions such as spinal cord injury. PSCs are, in principle, unlimited in their expansion potential and represent an epigenetically “blank slate” that enables directed patterning toward all lineages. Importantly, the differentiation of human neural cell types from human pluripotent stem cells enables the study of neural development in an understudied model organism to date only remotely accessible to biological discovery: humans.

Neural differentiation of hPSCs:
Exemplifying the feasibility of using hPSCs for developmental studies, we hypothesized that factors known to neuralize tissue in embryological development could be exploited to guide PSCs toward neural fate. Indeed, we were able to induce neural differentiation by the application of the BMP antagonist Noggin, and thereby greatly enhance neuralization (here: typical neuroepithelial rosettes) as well as differentiation toward functional neurons in a dose and time-dependent manner. This illustrated that, in principle, basic aspects of neural development do apply to hPSC in vitro systems.
mod. from: Pruszak & Isacson, Adv Exp Med Biol 2009

Ongoing projects in the lab aim at elucidating the role of specific integrin heterodimers in the critical transition from neural stem cell to neuroblast. In this context we aim to understand the role of environment-dependent signaling pathways that control proliferation versus differentiation in the neural stem cell niche. For example, Hippo pathway components, involved in organ size regulation and cancer, have recently become a focus of study in a range of stem cell systems, but little is known about its function in mammalian neural development and its interplay with other signaling pathways. Enhanced understanding of how neural cell numbers are controlled during brain development may enable us to better control and therapeutically exploit human neural stem cell systems in the future.