Return to the diffusible signal oscillator

This is the first devise I desiged. 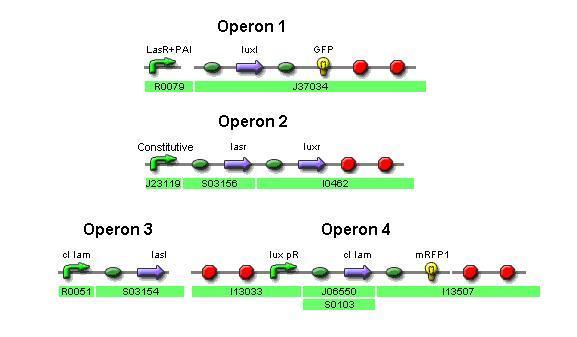 I intended to create an artificial oscillator that would be able to synchronize large population of bacteria. The UNAM-IPN Team chose the project to present it at the iGEM 2007 but we were unable to assemble it, we had not the required enzymes.

The behavior of the construction was simulated, thanks to my teammate Luis de Jesus Martínez, using SPIM.

The devise had many flaws; it used two quorum diffusible signals (las and lux) that could lead to crosstalk and delay the system response and also had two reporters that could intertwine and blur the signal of oscillations. The devise did not have aiiA so the lactones inside the cells would remain for a long time making the oscillations hard to detect. Also, the usage of biobricks was clumsy so the devise required several ligations to be assembled.

Now this devise have been improved.