After initially being developed by photolithographyand etching, the fabrication of microfluidic devices has evolved towards soft lithography. In soft lithography, a polymer is poured onto a glass or silicon master and then peeled off to get the desired design in that polymer. The polymer of choice thus far has typically been poly(dimethyl siloxane) (PDMS) [1]. However, several issues with PDMS have given rise to interest in finding a new material that could be used to make microfluidic devices.

Although PDMS is inexpensive, safe, transparent, elastomeric, and inert [1], it has several properties that limit it from being a consistently effective material for microfluidic devices. PDMS has a high affinity for organic solvents, which causes PDMS to swell when exposed to organic solvents [2]. Swelling in a microfluidic device would change the original design, which could impede the device from functioning properly. This means dry chemistry such as organic synthesis could not be done in a PDMS microfluidic device. Another application limit is that common cleaning solvents such as ehtanol could not be used in a PDMS device. In addition to swelling, PDMS imposes other issues, such as a limited aspect ratio. This is due to the fact that PDMS would collapse in on itself if the channels are too wide or deep [3], as demonstrated in figure 2. These limitations make PDMS less than ideal for certain device applications. 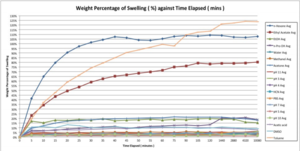 Figure 1 [2]: This graph shows the swelling of PDMS with different organic solvents over time. 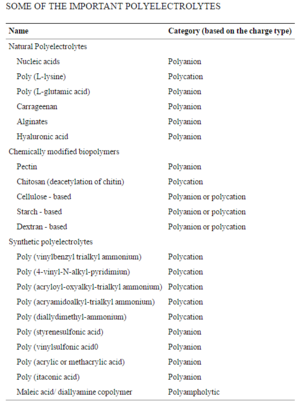 Table 1 [4]: Several naturally occurring and synthetic polymers commonly used for polyectrolectrolyte complex formation. For example, poly(L-lysine), a polycation, and poly(L-glutamic acid), a polyanion could be mixed to form a polyelectrolyte complex. 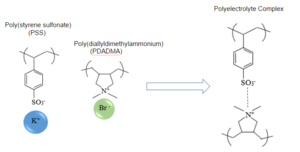 Figure 3: A polyelectrolyte is formed when the polyanion poly(styrene sulfonate) is mixed in solution with the polycation poly(diallyldimethylammonium). The bromine and potassium are counterions in solution.

PECs prove to be generally very robust materials. By employing physical crosslinking through coulombic charge pairing, PECs are extremely durable materials compared to many polymer samples. The charges form stronger bindings between chains approaching the strength and thermal/reactive resistance of chemically cross-linked polymer networks, while also maintaining the "recyclable" aspects of physical crosslinking. This crosslinking provides many of the interesting phenomena and characteristics associated with the PECs.

Due to the ionic nature of PECs there is a strong electrostatic force that acts between all of the constituent polymer chains and any surrounding materials. In an aqueous environment, these complexes have a ratio of open ionic sites and shielded sites [6]; this ratio is dependent on the number of available counter ions (often from simple ionic salts) and the number of ionic sites along the polymer chains [6]. 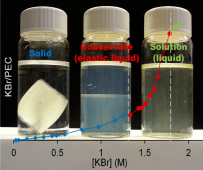 Increasing the concentration of salt in aqueous mixture of Polyelectrolytes decreases the viscosity of the complex, up to the point where the PEC becomes full dissolved in the solvent. Removing the salt in a PEC encourages ionic site pairing, drastically increasing the viscosity of the PEC until it becomes a rigid solid which is no longer soluble in water. This phenomenon has been called "Saloplasticity."[7] Saloplasticity can be useful in creating a liquid that can be molded into a shape and then solidified as salt concentration is decreased.

Exploiting the "saloplastic" properties of PECs a self healing property is created. Self healing usually implies a sense of memory in the material, but in the case of PECs the salt content allows for this property. The addition of salt, as previously explained, shields the ionic sites in the polyelectrolyte which removes the physical crosslinking. This creates a more elastic complex and this elastic behavior allows for self healing in the material. This property also implies a method of adhering PECs; by pressing two PECs layers together with a thin layer of salt between the two layers and then removing the salt, the layers, in theory, will form crosslinks and form a single PEC sample [8].

Use in Microfluidic Devices

The fabrication of PEC microfluidic devices has yet to be perfected, but the most promising technique combines soft lithography and compression molding. First, a PDMS master mold would be created via soft lithography. PDMS is used as the mold material because of its soft malleable structure that can peel away from the end component without damaging microfluidic design. Then the PEC coacervate can be pressed onto the PDMS mold. Adding pressure (via topical weight) is critical because without an external force the coacervate will not take the shape of the mold and maintain a high resolution. After the liquid coacervate is pressed onto the mold, water can be added. The addition of water pulls ions out of the coacervate, allowing it to solidify. Then the PDMS can be peeled away, and the microfluidic device will be on the PEC. Spin coating can be used instead of compression molding to get thin and consistent PEC layers.

Due to the novelty of the material, there are many unknown characteristics and hurdles to overcome for the microfabrication process. The PEC coacervates are generally very sticky, which results in extreme difficulty when molding and pressing the devices. The PEC surfaces have also been shown to have a porous structure (figure 5) due to the shift from the complexes formed in the salt rich coacervate phase to the solid low salt concentration PEC material [9]. These pores may interfere with the flow in the channels of the device, which could destroy the laminar flow- the defining and most useful characteristic of microfluidic devices-within the device. 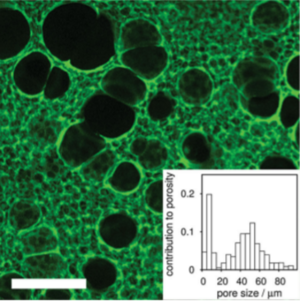 Figure 5 [9]: This flourescent microscopy image shows pores in a PEC made by mixing polyallylamine and polyacrylate. The scale bar is 100 µm.

In theory, PECs are very promising materials for the fabrication of microfluidic devices. Their impermeable, unreactive, and durable material properties seem ideal for microfludic devices, where the device scaffolding should provide little to no interference with the fluids within the channels. As a result, current and future experimentation should unveil whether or not this material is a feesible material for microfludic devices fabrication. Defining basic characteristics such as swelling properties and resolution will determine whether or not proceeding with microfabrication is feasible. In addition, further analysis is need to determine whether the porous surface will provide limitations, and if so how to evade that problem. These extrapolations combined with existing data on the adhesive properties of PECs will provide insight on the best method for fabrication.