Fig. 1 shows how PECs form between two oppositely charged polyelectrolytes. The charge groups of the polycation (positive charge) and the polycation (negative charge) interact through electrostatics to form bonds that are farily strong, but not as strong as polymer systems that are crosslinked ionically or covalently

Polyelectrolyte complexes (PECs) are a particular form of polymer self-assembling structure. These types of structures are created by the interactions of two oppositely charged polyelectrolytes, often in aqueous conditions. Often, these polyelectrolyte complexes result in the formation of solid, precipitate like structures, however, under certain conditions, these PECs will result in liquid-liquid phase separation.1,2The process of this associative liquid-liquid phase separation is known as complex coacervation, where the polymer dense phase that forms is a PEC known as a coacervate. The polymer poor phase which forms is known as the supernant.

Fig. 2 shows how increasing salt concentration in the complex system screens the interactions between the two polyectrolytes. This causes the plasticizing of the solid complexes to a more easily used liquid phase solution 1. 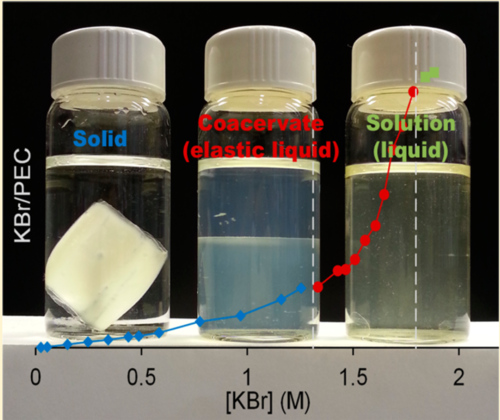 Fig. 3. depicts the effect of salt on the phases of the system. At low salt concentration, the system forms a solid polyelectrolyte complex. However, as more salt is added to the system, the solid complex plasticizes to form a second, polymer dense liquid phase. Once enough salt is added, the two phases disappear and leave a single homogeneous solution1.

In addition to salt effects on complex coacervation, various polymer systems have demonstrated salt-driven transitions from a liquid-solid phase separation, to that of coacervation. At very low salt concentrations, soild PECs form rather than the liquid coacervate phase 1. As the salt concentration is continually added to the system, the PEC solid will eventually become fluid like and increase in volume as it transitions towards becoming the polymer dense coacervate phase 6. This type of behavior is typically observed in relatively hydrophobic polyelectrolytes 5. Polyelectrolyte systems form very interesting characteristics once combined into PEC/coacervate structures including great thermal and solvent stability. These attributes are useful for a variety of applications, ranging from the encapsulation of flavored oils in frozen foods to the ink used in printing applications. In regard to the latter example, ink used for printing must be able to withstand variations in heat, light, and chemical solvents or dies. As previously mentioned, PECs meet these qualifications. Additionally, PECs can be tailored to meet the needs of the desired printing application, whether it be a filament used for 3D printing or an ink used for general printing purposes. Therefore, PECs have the potential to be widely utilized for printer filaments and ink due to the broad versatility and durability of PECs 7.

Due to the electrostatic forces that hold the coacervate phase together, coacervate based materials experience incredible stability, matching that of crosslinked polymeric materials. However, a significant difference between coacervates and normally crosslinked polymers is the lack of organic solvents necessary as crosslinking agents. This makes the coacervates a much more robust material to be used in everyday applications as they are less harmful than many of the normal polymers used. Also, encapsulation of dye molecules is possible in coacervate materials so it may be possible to have different colors of ink with similar stability.

Interface Between PEC and Printing

Generally, PDMS is the material of choice for microcontact printing stamps, however, this is not necessarily true for the printing of PECs. One of the main characteristics of the stamp is that it must have strong enough interactions with the ink in order to pick up the material, but the interactions should not be as strong as those between the ink and the desired printing substrate. Thus, we have several options for making subtract, for example, PECs film. In general, PECs will be introduced as ink. A layer of PEC ink is expected to be uniformly distributed on the surface. To reach this goal, several parameters that needs to be taken into consideration. First, surface energy, which indicates the wettability, can be measured by contact angle. Second, viscosity of the material. Rheology will be used as a tool to characterize the zero shear viscosity.8,9 Spin coating will be applied to provide a single layer of uniformly distributed PEC surface and heat will be applied to stabilized the PEC surface. The thickness of the layer that applied onto the substrate is a function of viscosity, spin coating speed. Overall, we are expected to have around 1-micron thickness layer, which will give us relative high resolution. Based on previous work, the resolution of printed PEC could be in a few micron scale 12. We are expected to get a resolution and thickness of 1-micron printed layer.

Fig. 4 shows the relation between contact angle and the ability of different materials to wet surfaces. This is useful to know because it can be used as a measure of how effective the PEC ink will be on a variety of substrates.

Due to the increased viscosity of the coacervates as well as the strong electrostatic forces that cause the stickiness of the material, the materials stick very differently to many surfaces. To determine the ability of the PECs to wet difference materials, contact angle testing is a good method to test this. The contact angle is the angle that forms between the droplet of ink material and the substrate that it was deposited onto, an example of which can be seen in Figure 3 10. An angle between the droplet and surface that is less than 90° represents very strong wetting of the ink on that surface. Angles that are 90° or greater represent weak surface wetting. Ideally, the PECs should have a range of materials that show strong wetting, representing materials that can act as printing substrates and a range of materials with moderate wetting as stamps. However,it is known that the interactions of polyelectrolytes and their complexes with a surface are dependent on the behavior of the bulk polyelectrolyte material as well the method that the solution traveled in order to get to its current state. For example, changing the pH vs. changing the salt content of a complex may alter the interactions that complex has with a surface. Therefore, both the complex and it’s activation method must be taken into account when understanding how the material will interact with, or attach to a surface 13.