The ultimate goal of tissue engineering is to create implantable materials for use in a personalized application of regenerative medicine[2]. More often than not, tissue replacement procedures are risky at best and the success of these treatments is not always guaranteed. For some medical patients, major tissue replacement, or even whole-organ transplantation, is the most desirable and least risky treatment. For some severe burn patients, autograft tissue transplantation, with skin from a different part of the patient’s body, is simply not an option. Patients with total organ failure can remain on waiting lists for years before being matched to a whole-organ donor. But even when a donor is closely related, the patient’s body often rejects an allograft tissue transplant, as discussed by Marco Yeung in Chapter 6. For patients with congenital tissue defects and also idiopathic diseases, such as type I diabetes mellitus, no tissue replacement treatments exist. However, tissue engineering has the potential to change all of this. In order for transplantable artificial tissues to be successfully implemented, a vascularizable scaffold must be seeded with autologously-derived stem cells that differentiate appropriately to yield a personalized medical product that performs the essential functions of the tissue it replaces. Engineered tissues have already been shown to be clinically successful. In 2008, the results of a successful partial airway replacement with engineered tissue were published[3]. In this case, cadaverous tracheal tissue was decellularized and then seeded with the patient’s own stem cells. After four days in a bioreactor, the engineered tissue was ready for transplantation. Four days after the successful operation, the transplant was nearly indistinguishable from the patient’s own nearby tissue. The patient was released only ten days after the operation. Within two months, the patient’s lung function improved dramatically. Perhaps the most notable aspect of this procedure, aside from the incredibly quick recuperation, is the fact that the patient never had to take any form of immunosuppressant medication. However, the engineering of more complex tissues have many obstacles that have yet to be overcome. For example, vascularization of most decellularized tissues and organs is seemingly impossible. The fabrication of artificial cell scaffolds has the potential to overcome this major hurdle; these scaffolds must be designed to closely mimic a human tissue; they must exhibit localized chemical and physical properties, such as elastic moduli and mass transfer, that would allow cells to proliferate and function appropriately. For this purpose, polymer-based hydrogels seem to show the most promise. Hydrogels composed of natural polymers, like collagens and other extracellular matrix-derived polypeptides, might seem to be the obvious choice. However, these natural hydrogels have proven to exhibit undesirable mechanical properties and immunogenic risks[4]. Hydrogels composed of synthetic polymers are widely preferred; among the most important of these synthetic polymers are those composed mainly of poly(ethylene glycol). 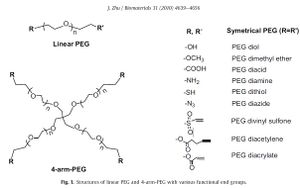 Poly(ethylene glycol) (PEG), also known as poly(ethylene oxide) and poly(oxyethylene), is a synthetic, non-biodegradable polymer that is widely used as an artificial scaffold in tissue engineering research. PEG chains of any length can be easily synthesized by the controlled polymerization of ethylene oxide or ethylene glycol in aqueous solution. PEG is highly biocompatible and well-suited for use in hydrogels for biological studies. Its repeating alkane-ether motif makes PEG not only very hydrophilic, which is important for nutrient and waste transport, but also biochemically inert. PEG is also non-immunogenic and resistant to protein adsorption[5], making it suitable for in vivo as well as in vitro studies. However, unlike natural polymers that are used in hydrogels, PEG is not biodegradable. As a result, PEG is almost always incorporated in block copolymers with biodegradable polymers, such as poly(glycolic acid) (PGA) and poly(lactic acid) (PLA). 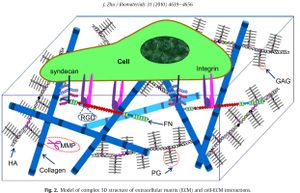 The main advantages of PEG-based hydrogels lie in the versatility of PEG chemistry. All chain lengths of PEG are soluble in water and can be synthesized with low polydispersity. PEG has both a linear structure and a branched (star) structure. Its hydroxyl end groups can be readily replaced with a wide variety of functional groups (Fig. 1)[6]. Those end groups can be identical or they can be two different functional groups: this makes PEG extremely versatile, not only in terms of hydrogel architecture, but also in covalently linking biomolecules. In order to simulate interactions with desired elements of a complex extracellular matrix (ECM), as illustrated in Figure 2[6], PEG networks are functionalized with biomolecules of four important and distinct categories: 1.) large, specific biomolecules, such as antibodies[7] or ECM-mimicking sequences like collagen’s characteristic proline-hydroxyproline-glycine repeat[8], 2.) growth factor (GF) binding molecules, such as glycosaminoglycans (GAGs)[9], or GFs like vascular endothelial growth factor (VEGF)[10], 3.) short cell-adhesive peptide sequences, like fibronectin’s RGD peptide sequence[11], and 4.) peptide sequences that are cleaved by enzymes, such as collagen-I’s GPQGIAGQ[12].

Fig. 6: Osteogenesis of MSCs encapsulated in degradable PEG hydrogels modified with signals. The cells were initially rounded with few intercellular interactions (left). With sufficient degradation over two weeks in vitro, there were enhanced cell-cell and cell-ECM interactions, leading to osteogenesis and tissue evolution (right) [17]

The functional consequences and advantages of these biofunctionalizations are best illustrated with examples: 1.) when seeded with human mesenchymal stem cells (MSCs), a PEG hydrogel functionalized with a transforming growth factor (TGF) and a collagen-mimetic sequence contains much more cartilage-specific ECM than a PEG hydrogel with the growth factor only (Fig. 3)[13], 2.) PEG-hydrogels with VEGF will recruit new blood vessels and effect angiogenic vascularization of the scaffold (Fig. 4)[15], 3.) human embryonic stem cell-derived cells (hESDCs) readily differentiate into chondrocytes in three weeks when adhered to RGD-functionalized PEG hydrogels, as a result of signaling cascades triggered by specific interaction of RGD with a_v and b_1 integrin subunits, whereas hESDCs cultured on unmodified PEG hydrogels and chondrogenic media do not (Fig. 5)[16], and 4.) MSCs, which initially were cultured in osteogenic media and exhibited a rounded shape, differentiate into osteoblasts after two weeks in a degradable PEG scaffold (Fig. 6)[17]. 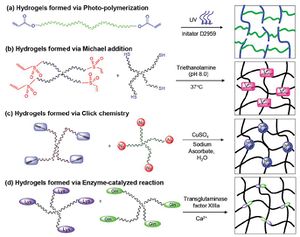 In addition to its chemical composition, the mechanical properties of a PEG-based hydrogel can be also be tuned. Stiffness and porosity, both of which are important mechanical cues for the function and fate of stem cells, are largely determined by the degree of crosslinking among polymer chains. Crosslinking can be achieved (Fig. 7) through specific chemical reactions, such as Michael-type addition and Click chemistry[13]. It can also be achieved through the use of radiation, like gamma radiation[6]. However, the most prominent method of crosslinking is a free radical mechanism: photopolymerization of PEG acrylates. 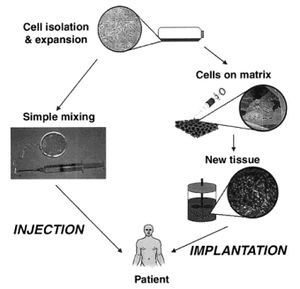 Fig. 8: Schematic illustration of typical tissue engineering approaches. Cells are obtained from a small biopsy from a patient, expanded in vitro, and transplanted into the patient either by injection using a needle or other minimally invasive delivery approach, or by implantation at the site following an incision (cut) by the surgeon to allow placement[14].

Photopolymerization of PEG acrylates is what really exploded the use of PEG hydrogels in tissue engineering research. A liquid mixture that contains PEG acrylates can be converted into a squishy hydrogel with only the application of light beams, including UV and visible light, in a reasonable amount of time[18]. The locations and exposure times of the applied light can be widely varied: this controllability makes it possible to fabricate heterogeneous, patterned 3-D hydrogels that mimic the mechanical properties of human tissue[19]. In addition, photopolymerization can be performed at temperature and pH conditions that are found in the human body; which allows for the localized encapsulation of living cells[20]. This is a crucial parameter in the modern design of hydrogels for tissue engineering (Fig. 8)[14]. One exciting application of this important benefit is injectable hydrogels: liquid mixtures of live cells, PEG acrylates, and other substances can be transdermally injected and subsequently polymerized by shining light across the skin[21]. 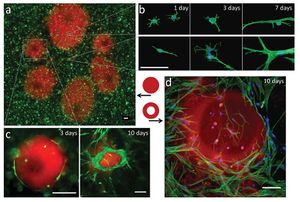 Fig. 9: Photopatterning of cell-laden Pluronic–fibrinogen hydrogels infl uences in situ cellular morphogenesis. GFP-expressing fibroblasts are cultured within a physically crosslinked hydrogel of Pluronic–fibrinogen with rhodamine-labeled Pluronic F127-acrylate (red) co-immobilized in regions of chemical crosslinking (a). The cells (in green) orient at the interface between the stiff regions (in red) and the softer regions (in black). Different exposure times are shown in (a) to demonstrate the effects on the cell behavior and pattern size. Fibroblasts grown in control hydrogels (not patterned) with physical–chemical crosslinking (b, top) or physical crosslinking alone (b, bottom) exhibited different time-dependent morphological features, which were consistent with their respective environments in the patterned system (the Supporting Information). The mechanical landscape of the Pluronic–fibrinogen hydrogels affects the cellular morphogenesis particularly at the interface between the stiff and soft regions, as indicated after 10 days in cultures with columnar patterns that are solid (c) or hollow (d). GFP-labeled cells (green) with rhodamine-labeled Pluronic F127-acrylate (red) are shown in (a,c); FITC-phalloidin (green) with DAPI nuclear staining is shown in b) and combined with rhodamine-labeled Pluronic F127-acrylate (red) in (d). Scale bars = 100 μm [23]

Another application utilizes photolithographic technology to create microstructures of various shapes and sizes, with features on the order of ten micrometers[22]; this has very recently been achieved in situ, directly on an inverted microscope stage, to influence the morphogenesis of fibroblast-dense PEG-based hydrogel with fibronectin (Fig. 9)[23]. By combining photolithographic and encapsulation techniques, groups of cells can be compartmentalized within a photopatterned hydrogel with various microstructures that aim to mimic glands and other tissues[24]. A schematic of, and images from, this layer-by-layer approach are illustrated in Figure 10. Another parameter for modern hydrogel design is the control of degradation rates in the hydrogel. In theory, stem cell fates and functions can be directed by strategic implementation of hydrolytically or enzymatically degradable segments, as discussed above. It is also possible to effect on-demand hydrogel degradation with the use of photodegradable PEG acrylates[25]. These kinds of dynamic microenvironmental designs could achieve precise temporal control and sequencing of extracellular cues: alteration of the hydrogel architecture, the exposure of biofunctionalized microstructures, and even the release of soluble signaling molecules[26].

Fig. 10: 3-D photopatterning of hydrogels. (a) Photopatterning Method. Polymer solution and cells are introduced into a chamber. The unit is exposed to 365 nm light through an emulsion mask, causing crosslinking of the polymer in the exposed areas and trapping the cells within these regions. The uncrosslinked polymer solution and cells are then washed away, and the process is repeated with thicker spacers and a new mask to create 3-D cellular hydrogel structures. Each layer may contain the same type of polymer/cell mixture, or can be composed of different polymer properties or different cell types. (b) Schematic and images of three-layered hybrid tissue consisting of PEG hydrogel containing mammalian cells[24].

PEG-hydrogels in preservation of stemness 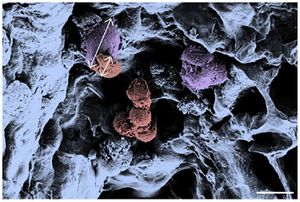 Fig. 11: Pseudo colored scanning electron micrograph of a porous hydrogel seeded with primary MSC-BM and HSPCs. The cell types can be distinguished by morphology and size as depicted by the arrows. Purple: adherent MSC-BM, ~28 μm in size; red: HSPCs, ~12 μm in size. Scale bar, 20 μm [29]

For the past twenty-five years, the US FDA has approved several PEG-based drug-delivery therapies[27]. Although PEG based hydrogels have proven useful in the lab[28], there exist no FDA-approved PEG hydrogel-stem cell therapies to day. However, there has recently been an encouraging report on progress towards the preservation of multipotency in human hematopoietic stem and progenitor cells (HSPCs) in vitro[29]. Researchers fabricated an RGD-functionalized, PEG-based macroporous scaffold that mimics the 3-D microenvironment, or stem cell niche, that is characteristic of spongy human bone marrow[30]. When human MSCs from bone marrow (MSC-BMs) and hematopoietic stem cells (HSCs) were cultured simultaneously with cytokine-rich media in this system (Fig. 11), it was found that the HSPCs proliferated and the multipotency of the HSPC population appeared to be preserved. This is an unprecedented finding because, typically, HSCs tend to differentiate very quickly in culture. Furthermore, if this technology were to be developed, the need for blood drives and conventional blood banks would be completely eliminated: hospitals would be able to produce any amount of blood, of any type, on demand. This capability would eliminate any risk of donor-associated pathogens or immunogenic response in blood recipients.

A timeline of PEG-based hydrogels in tissue engineering [6,30]