Pigs as Animal Models in Tissue Engineering by Matthew Long

Pigs have had a long history in medicine. As far back as 150 AD the Greek physician, Galen of Pergamon dissected pigs to approximate human physiology. Laws at the time prohibited the autopsy of humans [1]. Fast forward to middle of the twentieth century, and the first pig aortic heart valve was used to treat individuals with stenosis and congenital heart disease in the 1960s [2]. Even more recently, pigs are being used to attempt to cure everything from periodontal disease to Huntington's disease.

While most researchers in tissue engineering have focused on treating debilitating diseases and conditions, a novel application is the treatment of damaged connective tissue in the mouth. Often once the tissue in the mouth has been damaged, whether by trauma, tumors, or disease, it cannot regenerate [3]. Stem cells like periodontal ligament stem cells or orofacial mesenchymal stem cells can be used can be taken from deciduous teeth, colloquially known as 'baby teeth', can be used to treat these conditions [4].

In a collaboration with researchers from the University of Southern California and the Capital Medical University in Beijing, China, sixteen pigs had mandibular bone defects surgically created. One group was treated with the porcine orofacial stem cells in addition to a control group. After 24 weeks, the pigs were slaughtered and the mandibular bones had CT scans taken of them. The treated group showed remarkable treatment compared the control group [4].

In general, pigs often serve crucial roles as models for developing cartilage replacement therapies. Unlike mice, the pig's joint size, load, and cartilage are very similar to humans, and make excellent testing beds for new treatments. The cartilage thickness in joints is approximately 1.5mm which allows the creation of full defect [5]. Pigs can also be used to understand wound healing. Pigs are large enough the multiple treatments, and it is easy to model events like an autologous graft or a reaction to an implant [6].

Pigs can also be used as sources for nervous cell xenografts to treat degenerative neurological diseases like Huntington's disease, Parkinson's disease, potentially Alzheimer's disease. Treatments using allographs have shown remarkable success with the grafts surviving for up to 14 years. Despite these successes there is limited availability of human fetal tissue for treatments and enormous ethical concerns. Pigs have been considered a possible alternative for nerve allografts, and currently there are trials in both the pre-clinical and clinical phase [7].

Porcine nerve xerographs can be used because the brain exists in what is considered by researchers to be an immune privileged region. The blood brain barrier blocks the transfer of most immune cells, although some activated T cells can still cross the barrier. The brain also has local immunosuppressive factors like TGF-β and FAS ligand, and it does not contain conventional lymphatic vessels additionally, the hosts own blood vessels support cells will work to obscure the graft cells [8].

However, despite these the treatments still have significant hurdles to overcome in order to be considered a viable option. In a clinical trial twelve Huntington's patients were treated with porcine nerve grafts, one patient was autopsied eight months later and had 642 cells remaining of the approximately 1.2 x 10^6 that were originally grafted [8]. In trials where porcine nerve cells were transferred to immunosuppressed primates with modeled spinal cord injuries and were treated with embryonic porcine mesencephalon cells, the grafts on average lasted 6 months. Furthermore, the long term immune response needs to be further characterized. Microglial cells and T-cells CD4+ and CD8+ have been found to penetrate the graft [7].

Pig derived materials can also be as a source of blood vessels for treating diseases like atherosclerosis, and pigs can be used as tests beds for engineered arteries. It's often difficult to graft smaller blood vessels with synthetic grafts because the difference in mechanical properties between the host's vessels and the graft led to failure. Pig blood vessels have much closer properties; porcine arteries have a burst pressure about 1,337 plus or minus 103 mm Hg, while human saphenous vein at 1,6880 plus or minus 307 mm Hg [9]. In one paper, cadaver porcine arteries were harvested the cells surrounding the artery were removed. Researchers were able to conclude that removing the cells had no noticeable effect on the mechanical properties of the arteries, see figure below. The removal process involved washing the artery in DI water, then treating it with sodium deoxycholate, followed by a treatment in deoxyribonuclease. Finally, the artery was washed once in saline. This process was repeated four times [10]. 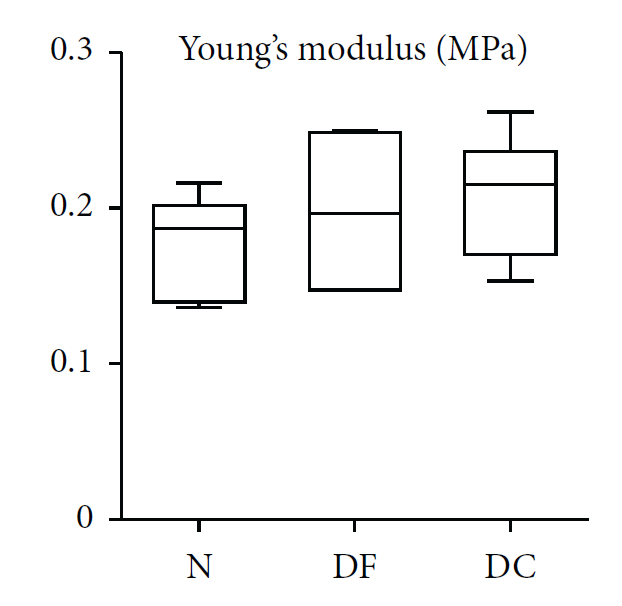 Where N are the native arteries, DF is the defrozen arteries, and DC is decellularized arteries [10].

Great strives are also being made to branch out into more applications. Porcine aortic valves have been used since the late 1960s. However, currently 25% of valves will fail in ten years, and almost 50% will fail by fifteen years. This is mostly due to calcification around the heart valve. Excess collagen and elastin fibers serve as points for this calcification to occur [2].

Recent developments use pigs as a testing ground for artificial bladder procedures. Researchers from the University of Toronto developed a procedure where acellular bladders were created from harvesting cadaver pig bladders and treating them with sodium dodecyl sulfate and other chemicals. After being washed of cells and rinsed with saline, the bladder was inoculated with small intestine submucosa, cytokines and active growth factors. In two weeks' time a single layer of urothelium had formed, and by four weeks multiple layers, smooth muscles, and angiogenesis had formed. However, it was found that bladders had shrunk by 25% possibly due to the matrix being rearranged and the formation of connective tissue [11].

The markets for these possible treatments are massive. According to the American Academy of Periodontology almost half of adult Americans suffer from gum disease [12]. The number of coronary artery bypass grafting surgeries performed each year in the United States is more than 500,000, with an estimated cost according to Bloomberg News of over $100,000 [13][14]. Lastly, Alzheimer's disease is ranked as the sixth biggest killer here in America, not to mention the massive physiological toll it takes on families and caregivers.

More research must be conducted in order for these to become viable treatments. For example, porcine nerve grafts still have significant hurdles that need to be overcome in order if are to be on the same level a fetal human equivalents. However, if these details can be worked out, the applications for medicine will be far and wide reaching.