Mass of the Electron(first week)

Mass of the Electron(second week)

A procedure and introduction to this experiment can be found here 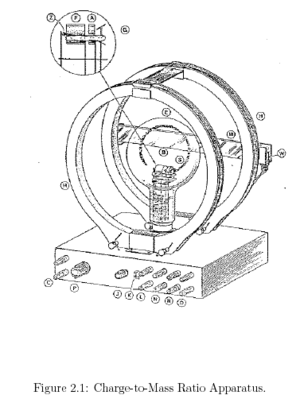 Steven J. Koch 02:06, 13 September 2007 (EDT):Impressive work today, guys! Your beam looked very nice at some points today, and I suspect you got some good data. If you have time, try analyzing it before you come in next week, so you can see whether you're on the right track and / or need more / better data.

Excellent use of error estimates on your radii! A comment: you also should estimate the error on your "x" values (coil current or accelerating voltage)...this is important, too, for estimating the error in your final estimate.

We started by setting up the test apperatus using 2 power supplys and 1 multimeter. The supplys were used to  supply the test apperatus with both the helmoltz coil current and the accelerating potential. The multimeter actually measures the helmotz current (no larger than 2A). After seeing the electron beam we started just playing around with the settings just to get a feel for the setup and the test apperatus. After we felt comfortable with the equipment, we started taking measurements on the electron beam. The measurement procedure is outlined in Professor Golds lab handbook. One thing that was not documented was the use of the "focus" knob on the apperatus.  We first first fixed the coil current to 1A, veried the accelerating potential (V) from 200V,  incremented the potential by 20V up to 260V measureing the radius of curvature at each incrument. We determined the measurement error by observing the uniform width of the beam from measurement to measurement. The same type of procedure was done with data set #2 except this time we fixed the accelerating potential at 200V and varied the coil current starting from 1A to 1.6A in .2A increments. In both data sets, before we measured the radius of the beam, we adjusted the "focus" knob to "clean-up" the beam.

In a magnetic field of strength B, the Lorenzts force acting on than electron with velocity v is F = ev x B. If the magnetic field is uniform, as it is in the Helmholtz arrangement, the electron follows a spiral (helix) path along the magnetic lines of force, which becomes a circle of radius r if v is perpendicular to B. As we increased the coil current we noticed that the ring was getting smaller (r was decreasing). By increasing the current the magnitic field became stronger and since the radius of of the electron path is proportional to the strength of the B field (from the equations above)and the e/m ratio decreases as well. The reason why we are able to see a visible light trail is because some of the electrons collide with helium atoms. The atoms are excited and ten radiate visible light. Furthermore, when we fixed the coil current and varied the accelerating voltage, the radius r increased significantly as did the e/m ratio which was translated a decrease in B field strength allowing the electron to be loosely bound. Something that we didn't now was that A unique feature of the e/m tube is that the socket rotates, allowing the electron beam to be oriented at any angle (from 0-90 degrees) with respect to the magnetic field produced by the Helmholtz coils.

-Using Lorentz equation to determine the work done by the electron -Determining whether or not we should include certain measurements in our running average estimation for radius of curvature -Why would might it be important to also include error measurements in accelerating voltage and coil current. What would be the advantages?


Fixed Acceleration Potential (V)        ***Note: The B field had to be calulated to accomidate change in coil current. See Raw Daa 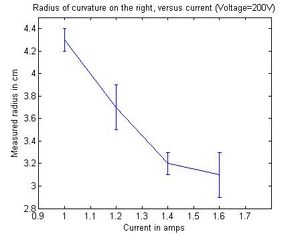 Radius of curvature on the right, versus current (Voltage=200V) 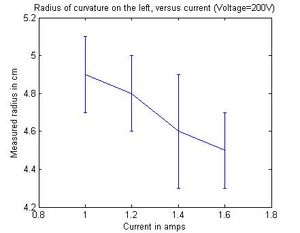 Radius of curvature on the left, versus current (Voltage=200V) 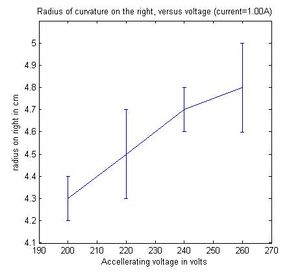 Radius of curvature on the right, versus voltage (current=1.00A) 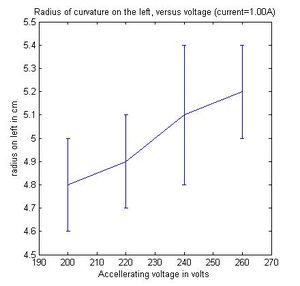 Radius of curvature on the left, versus voltage (current=1.00A)
Retrieved from "https://openwetware.org/mediawiki/index.php?title=Physics307L_F09:People/Mondragon/Notebook/070912&oldid=441471"