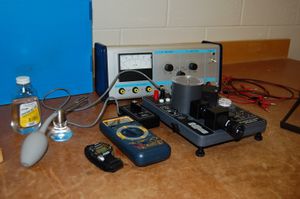 Known (given to as many significant figures as are reasonably certain):

To be found when taking data:

To be calculated later:

Comments on derivations of above equations

After turning off the external lights, we sprayed oil droplets into the viewing chamber using the atomizer by pumping droplet rich air into it. There is no science to this; we just kept trying over and over until droplets appeared in the center of the screen. We then selected drops that were barely falling through the viewing chamber in no electric field (we want drops that have little mass). From those drops, we selected one that moves slowly in a field (we want drops that have little charge). Perhaps, in hindsight, we should have selected some drops that were moving a little bit faster since most of our selected drops had plus or minus one electron, but we thought we were dealing with larger charges with our selected drops.

We measured the speed at which it falls, [math]\displaystyle{ v_f }[/math]. Having a partner to hold the stopwatch and write data while the other person watches the droplet is very helpful. We then created an electric field that caused the droplet to rise and measured the speed, [math]\displaystyle{ v_r }[/math]. We took many measurements of both of these speeds over and over on the same droplet. We then tried to introduce alpha particles using the thorium-232 source to change the charge of the oil droplet (to be either more positive or negative depending on how the collision between the oil and alpha particles occurred), but the droplet would often become lost in the viewing chamber before we could do this.

This process took practice, and it was hard to be sure that the droplet was not changing its charge unexpectedly. This happened a few times. Also, it probably would have been better if we would have waited for the power supply and thermistor to warm up to reduce fluctuations in voltage and temperature.

Our first observation for [math]\displaystyle{ t_r }[/math] was very different and we suspect a change in charge, so we are discarding it, even though I am displaying it below.

Our first observation for [math]\displaystyle{ t_r }[/math] was very different and we suspect a recording error, so we are discarding it, and I am displaying it below. We only took two falling times because these took much longer than the rising times and we were lazy.

Droplets 3B, 4 and 5 acquired either one or two data points before going out of focus and becoming lost.

My first observation is that making the charge more positive in 2B significantly decreases the size of the droplet. This is interesting because it shows that the collisions between the droplets and alpha particles are violent.

Let's see how good of an experimentalist I am...