23:27, 7 December 2007 (CST)
The abstract for this report is harder than most, given that the emphasis is on comparison of fitting methods, etc. This is a good start. All interesting info, but biased too much towards cosmic info, and if you read it you may notice you never mention anything about how you are detecting events. You also want to put some kind of conclusion in your abstract, such as "we found no significant difference between blah and blah" or "we found..."

The Poisson distribution is a probability function that often shows up in counting experiments where events are being counted that happen randomly but at a definite average rate. In this experiment, we count gamma ray detection events. The diffuse gamma ray background ensures that the Earth is bathed with a steady stream of gamma rays in every direction, though, the galactic plane, active galactic nuclei, and pulsars can be brighter than the background. Over a course of a couple of hours the intensity should not vary by much except if a pulsar jet sweeps by the Earth or a solar flare erupts in the direction of Earth. Thus, as long as our detection instruments maintain a constant sensitivity, we should detect gamma rays at random times but at a steady average rate. The data we collect should conform to the Poisson mass probability function. After several counting experiments at a dwell time, the Poisson distribution function can be used to estimate an expectation number for the number of events which will be detected in a dwell time. After repeating this with different dwell times, we calculate the average gamma ray detection rate.

23:45, 7 December 2007 (CST)
This is now a good base for the introduction. Parts that are here are well written (but as you noted in email, lacking references). Missing is a discussion of how the Poisson behaves (i.e., approaching normal dist. at high expected counts), and also a description of what you actually will be doing (varying expected counts, comparing different fits).

The Poisson distribution is a probability function that often shows up in counting experiments where either events are being counted that happen randomly but at a definite average rate or objects are being counted that are distributed randomly throughout a space but with a definite average number density. It describes the probability of counting [math]\displaystyle{ k }[/math] events or objects in a discrete chunk of time or space when [math]\displaystyle{ \lambda }[/math] is the expected number of events or objects in an equivalently sized discrete chunk of time or space with the same average event rate or object number density.

If Ω is the average event rate or object number density, and η is the size of the discrete chunk of time or space, [math]\displaystyle{ \lambda=\Omega*\eta }[/math]

In this experiment, we count gamma ray detection events. The diffuse gamma ray background ensures that the Earth is bathed with a steady stream of gamma rays in every direction, though, the galactic plane, active galactic nuclei, and pulsars can be brighter than the background. Over a course of a couple of hours the intensity should not vary by much except if a pulsar jet sweeps by the Earth or a solar flare erupts in the direction of Earth. Thus, as long as our detection instruments maintain a constant sensitivity, we should detect gamma rays at random times but at a steady average rate. The data we collect should conform to the Poisson mass probability function.

To conduct a series of counting experiments where a very low to moderately high count number is expected, we used a gamma ray detector which was a NaI(Th) scintillator attached to a PMT with adjustable sensitivity encased in an aluminum housing. The detector unit we used was a Harshaw NaI(Tl) Integral Line scintillation detector type 12S12 (Serial# EG 320 UNM Property #149864). The PMT base is is an Ortec Model 266 PM base (Serial# 1354 Rev # 10 UNM Property # 149895). The aluminum housing had the function of blocking α and β radiation. We placed the detector unit in a lead cave which contained no obvious gamma sources to reduce the expected count rate.

The sensitivity of the PMT in the detector unit could be adjusted by adjusting the voltage level output of the high voltage power supply to the PMT. Our power supply was a Betran Associates, Inc Model 315 DC Power Supply. To further reduce the count rate, we kept the voltage supply at about 1000 V throughout the experiment.

The event counter we used was a MCA card inside one of the lab computers. Our MCA was an Oxford Instruments Inc. Third Generation Personal Computer Analyzer Version 2.42. The MCA we were using required voltage pulses larger than what the PMT output, so we sent the output through an amplifier to shape the pulses appropriately. We used a Canberra Model 814 Preamp/Amp/Disc. To get the MCA to bin events according to detection time rather than by the pulse height the PMT and amplifier output, we shorted the MCA/REJ pin to the SCA pin on the exterior part of the card with a breakout/hydra cable.

We set up the computer we were storing our count data to put the data in 256 bins so that the whole detecting and counting apparatus would run 256 counting experiments every time we did a data collection run. In our first data collection run, we set the dwell time to 10ms so the apparatus would count the gamma ray detection events that happened in a 10ms time period until it had performed this experiment 256 times. We repeated this for dwell times of 20ms,40ms, 80ms, 100ms, 200ms, 400ms, 800ms, 1s, and 10s.

After every data collection run, I saved the data collected by the MCA into a separate ASCII text file. Examples can be found in my notebook entry about this experiment. These text files contain data on how many events where counted while the MCA dwelled on a channel and which Region of Interest (ROI) that channel lied in. My concern was with how often and with what probability a certain number of events could be expected to occur during a set dwell time. So for each run, I counted how many times a number x of events were counted in a dwell time window during that run. That data is plotted in the following graphic.

13:14, 4 December 2007 (CST)
Do not change this, since you do not have time. But I wanted to point out that sigma technically isn't constant. If you count 100 events, the sigma is 10, and if you count 9 events, the sigma is 3. But it's a little strange to do that, because that means you know about the Poisson distribution already :). But in any case, clearly the sigma for 100 counts cant be the same as the sigma for 1 or 0 count.

13:26, 4 December 2007 (CST)
So, from these low-counts-per-bin plots, you can clearly see that the Chi-squared method weights the higher number of events more than the lower (i.e. it is biased toward lower lambda). I would think this is because your sigma is not varied from point to point (as discussed above). If you weighted the chi-square by the sigma, then I think your lambda would shift to higher values.
*Tomas A. Mondragon 12:44, 6 December 2007 (CST) Actually, this plot caugt my eye a while back, and I found that this weirdness was caused by a superfluous loop in the code of the MATLAB function I made up to calculate some of the results. Caused something like an average over N instead of N-1. No time to fix it now, unfortunately. I am still not convinced that the sigma applies to the individual bin counts themselves. I think it's more to do with the fact that counting is a discrete process, and when I normalize my data to be in the same scale as the PDF, there is no way for the results to hit the numbers in the PDF exactly

13:28, 4 December 2007 (CST)
For long time scale, it looks like your data are more skewed to the right than the Poisson dictates. I wonder if this is due to drift or something? 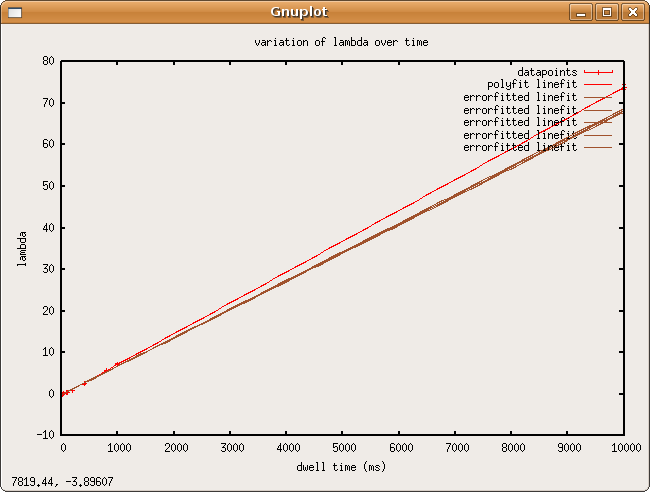 The fit that does not take into account the errors looks to be the better of the fits. When the error I computed comes into consideration, the earlier data points gain way more importance than the later data points, which is understandable given that the Δλ I calculated get larger towards the end and the close spacing of the earlier points. Looking at a logarithmic plot, the fit that ignores error values still looks like a better fit.SJK 13:54, 4 December 2007 (CST)

13:54, 4 December 2007 (CST)
I put in the % value of delta_lambda / lambda above. I think your problem is your delta lambda is not decreasing quickly enough as you increase the time window. This is because of some non-Poissonian component of your data I think (such as drift). If you assume Poisson statistics for each experiment, then the error in lambda will go as the inverse square root of the time interval. So, the relative error in the 10s time bin will be 10 times less than the 100 ms time bin. To do this, you would use delta_lambda = sqrt(total_counts)/number bins. 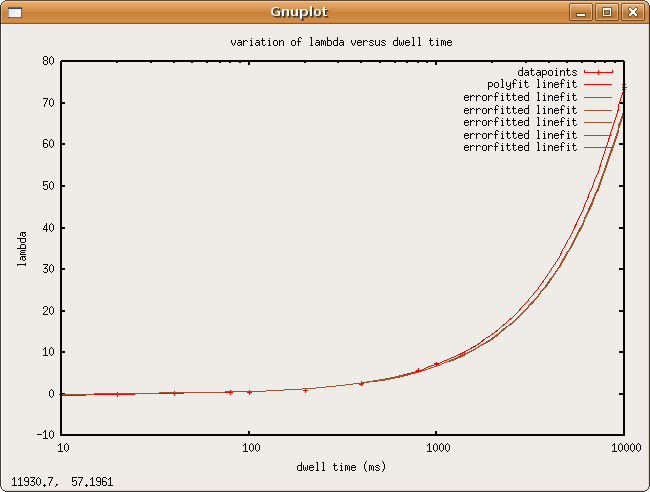 There ought to be an error contribution due to how little data is collected at small dwell times and the relatively short runs.

The events we were counting, from the appearance of the data taken by Knockel and Joseph (who had a very similar setup) does not appear to have an average count rate that fluctuates with time - at least for a period of several days. whatever the source of the events. The fluctuations in the average count in their data probably has more to do with changes in the sensitivity of the scintillator/PMT apparatus, which can be caused by changes in the voltage supplied to the PMT. This could have been in turn caused by the unreliable ground wiring in the Physics building. Professor Koch mentioned Dr. Geremia found evidence of this.

The Poisson probability mass distribution fit the data we collected very well, and the assertion that the event we were detecting happened at random but at an average rate. The expectation values for the fits for a clear linear relation with the dwell times. The equipment we were using was detecting gamma rays at a rate of 7.411 events per second.

Side by side comparison of two methods of estimating the expectation values of the fits revealed that the [math]\displaystyle{ \Chi^2 }[/math] method and the data averaging method both produced fit which did not deviate from the data by huge amounts. The [math]\displaystyle{ \Chi^2 }[/math] method produced tighter fits consistently, but only because the method could be used to estimate the expectation value to arbitrary precision, where as the precision of the data averaging is limited by the number of counting experiments done for a dwell time.

My knowledge of the limits on how tightly a Poisson distribution can fit this type of data is woefully inadequate. Perhaps I can look into this in future experiments, or try to find Molina's book on the matter.

I would like to thank the University of New Mexico's Physics department for allowing me to use their equipment to conduct this experiment.

I also wish to acknowledge Dr. Steven Koch, who supervised the lab and provided insight into where the fluctuations in average count data in Joseph and Knockel's data. He also found the user's manual for the MCA card we were using, which was a great help since I had forgotten how to use the software that came with it.

Lastly, I wish to acknowledge my lab partner Lorenzo Trujillo. He assisted greatly in the data collection and his experience with oscilloscopes proved very useful in the set up of this experiment and many others.