For this experiment, Kirstin and I measured the background radiation in the lab and used it to demonstrate the Poisson Distribution. My notebook and data for this experiment can be found here. The Poisson distribution is used when a process occurs randomly, but with a definitive overall rate. Mathematically, this represented as:

To demonstrate this, we counted the number of events in a specified time window repetitively, on the order of 2500 windows. We then changed the size of the window in steps from 10 ms to 1 s. From these we calculated the average number of counts per window and their standard of mean directly from the data. We also calculated the square root of average. The reason for this is that the square root of the average is the standard deviation, and uniquely shows the Poisson distribution. Here is our calculated values, plus the percent difference between the two standard deviations: 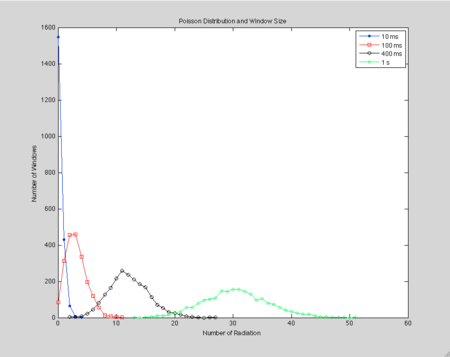