Also referred to as ‘optical lithography’ or ‘UV lithography,’ photolithography uses UV light to create patterns or shapes on a material. Photolithography is used in research to make patterns with a high level of precision [1]. It is also widely used in making of microfluidics devices, microelectronic circuits and microelectromechanical systems using ‘photoresist’ films [2]. This technique requires a source of UV light, photoresist material and mask [1]. 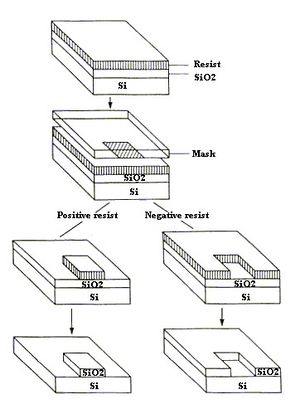 Photoresist material acts as a casting solvent. Some characteristics of photoresist include being highly sensitive to light, a good adhesive, unlikely to initiate etching and having a high-resolution [12]. Sensitivity to light, good adhesion properties, high resolution, and a low chance to initiate etching. There are two types of photoresist: negative and positive. Positive photoresist is when areas of the materials exposed to UV light become weaker and then removed. Meanwhile negative photoresist describes when areas of materials exposed to UV light become stronger and the parts not exposed become removed [2]. An example of a photoresist material is Su-8, which is a negative photoresist made from epoxy. The material dries fast and increases the productivity of the process [3].

What is Pattern Surfaces?

Patterned surfaces are important to the study of cells or protein and their functions, drug delivery and bio sensing[17].Patterned materials hold particular positions; sizes and shapes to make an organized structure and any disturbance in the structure could be monitored and analyzed. This technique therefore assists in the investigation of the cell-material interaction [4]. 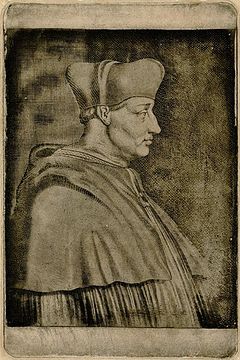 
1987- MacAlear and Wehrunf use photolithography to make pattern on protein [6].


1988- Kleinfeld, Kahler and Hockbergerb use photolithography to control growth of neurons [6].

Microfluidics is the study of fluids on the micron scale [7]. Microfluidics is interesting because of its direct applications in medical diagnostics and drug screening, its role in chemical and biological warfare detection, and its ability to create rapid readout of data and its portability [8]. Due to its microscale, the flow of liquid in a microfluidic device is laminar which makes it more predictable since it is in the low Reynold’s number region. This allows more control of the flow rate and interactions in the cellular environments. The process is also cheaper, could minimize the amount of hazardous waste and allows more in-depth studies on cellular interactions with materials and behavior due to its small scale [9]

The most commonly used material for microfluidics is polydimethylsiloxane (PDMS). PDMS is a silicon based material that is very elastic and cheap. It can be easily obtained and the shape can be easily modified due to its flexibility. PDMS is non-toxic and gas can diffuse easily to the material. This makes it optimal for cell studies. PDMS is also transparent which helps with imaging and is also biocompatible with other materials. In addition, it may act as an adhesive when combined another material like glass and polystyrene[10].

First load the wafer onto a hot plate to dry it [11]. Then, place the wafer on a spinner chuck and pour the photoresist materials in the middle of the wafer until 2/3 of the wafer is covered and program the spin coater. Once the wafer if uniformly coated with the photoresist material, the wafer will be heated up at a certain temperature to remove any solvent that is in the photoresist material (soft bake). Then, align the photomask with the wafer and expose them with UV light. Then, bake the wafer again for a few minutes, develop the wafer under a developer and rinse it with isopropyl alcohol after. Then, dry the wafer (hard bake) [12].Etching may make channels in the substrate if needed. There are two types of etching: wet and dry etching. Wet etching uses chemical specific materials to remove parts of the substrate in the wafer [13]. Dry etching uses gasses or plasmas to remove the substrate. The photoresist could be removed with some steps but it is not necessary [12]. PDMS is the poured on the wafer after etching is done. The wafer acts like a stamp. After the PDMS is dried, it is peeled off and then added to a hard material like glass that is premade with fabrications to accommodate tubing. 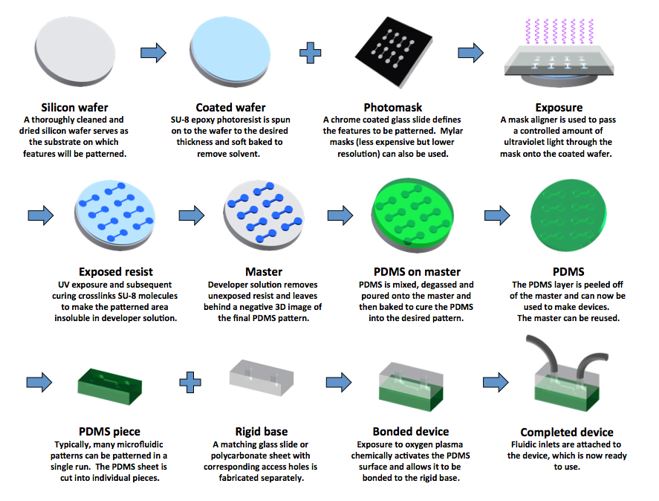 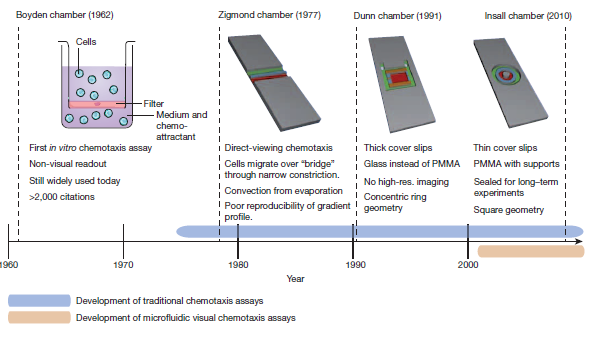 The changes of methods over time to study cell migration [7]

For example, it can be used to analyze the neutrophils which are an important part of the innate immune system. These could help study the reaction time and diagnostics to make devices that detects disease[7]. An experiment that was done was by putting the Neutrophil cells in the device and then changing the concentrations of Interleukin -8 (IL-8). A gradient was established across the device and two different methods were investigated. One was a linear gradient and another method is a cliff gradient which is when after an increase of gradient, there is sudden decrease to zero. The results are that at linear increase the cells goes to the higher concentration of IL-8 and for the cliff gradient, the cells stops moving during the sudden drops but continuously goes toward the higher concentration. This experiment helps study where the cells would go at different IL-8 concentrations and study cell adaptation to different environments[9]. 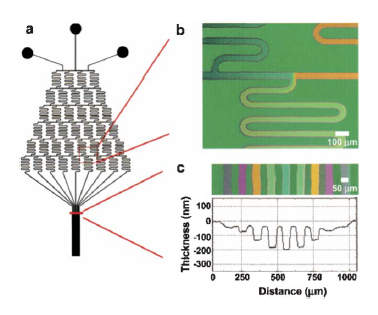 Study of Neutrophil migration by changing the gradient[9]

Another is study is to purify neutrophils from blood. This is done by using properties of magnetism on aqueous-oil interface across different chambers. Blood will go through different chambers of aqueous oil phase barrier and each chamber has different properties to separate different cells. At the end of the device, the analyte is bounded to a fluorescent antibody to record the number of cells that are in the blood [7]. 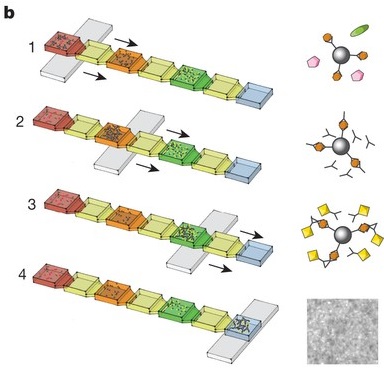 Lab on a chip or CD are popular to decrease the amount of time and cost needed for a test. Immunoassays may be combined with microfluidic devices in order to test drug delivery, to give more information about diseases and to help with diagnostics in hospitals. The fist assay that was tested was enzyme –linked immunosorbent assay ( ELISA). Nine different chambers were made in the CD that holds different chemicals that would aid to different reactions. The Gyrolab developed a microfluidic device that uses centrifugal force to help analyze the immunoassay. The fluid is injected into the CD until its full then the plate that the CD is in will rotate at different speeds depending on the settings. They were able to isolate proteins and antigens in the assay. They also made another CD with a multiplex system that allows more than one antigen that can be tested[14][15].

Device to check for diseases

Scientist and engineers are finding ways to build cheaper, user-friendly and fast devices in order to detect diseases in low-income countries using micro fluidic devices. Normally, a few milliliters of blood is drawn then sent to a lab facility to determine the contents in it which is highly expensive. This proposed machine could be used like a glucose meter or pregnancy test. Many devices are made and the one in figure below is a device made to detect HIV and other diseases[7]. 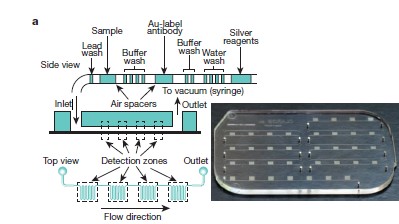 A microfluidic device to perform ELISA for HIV [7]

Organ-on –chip is being developed to decrease the cost to research about drug delivery and diseases to replicate the function of a particular organ using in vitro assays. An example is to develop a device that mimics the lungs functions like expanding and contracting when breathing is using PDMS[7]. 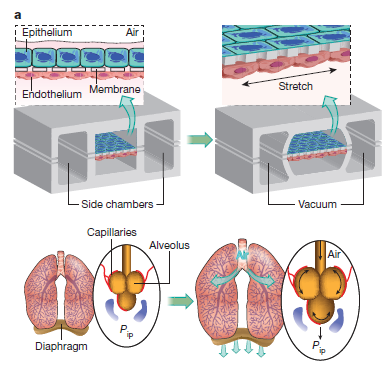 Design of organ-on-chip to mimic the lungs function[7]

The disadvantages of using photolithography are that it is very expensive because of the cost of the machines and the need for access to a clean room; or a room with dim lights that prevents UV radiation specifically for photolithography. Another disadvantage is that the surface properties like specific chemical properties to adhere to adsorption can’t be controlled nor manipulate and has a rigid structure. This procedure can only cut the material unidirectional; only vertically, and is unable to be cut horizontally. Depending on the complexity of the experiment, it takes a long time to design and develop a prototype. The materials used for this technique is not suitable for biological systems because it is unable to simulate a biological system. These disadvantages are compensated by adding soft lithography techniques to the material [4][16].