Back to Brown Lab

Pat was born in Washington, D.C. and grew up in Northern Virginia; Paris, France; and Taipei, Taiwan. In 1972, he entered the University of Chicago, finally emerging nearly a decade later with a B.A., M.D., and Ph.D. His thesis work, with Nick Cozzarelli, investigated the basic molecular mechanisms of DNA topoisomerases. Brown completed residency training in pediatrics in 1985, at Chicago's Children's Memorial Hospital. In a post-doctoral fellowship at the University of California, San Francisco, with J. Michael Bishop and Harold Varmus, he characterized the mechanism by which retroviruses, such as HIV, incorporate their genes into the genomes of their hosts. In 1988, he joined the Howard Hughes Medical Institute and Stanford University School of Medicine, where he is currently a professor in the department of biochemistry. His current research activities include systematic studies of global gene expression programs and their regulation; the use of DNA microarrays and other "genomic" approaches to explore fundamental questions in cell biology, physiology, and development; and the development and application of new high-dimensional molecular profiling methods for detection and diagnosis of disease. Brown is married to Sue Klapholz, M.D., Ph.D., with three children: Zach, Ariel, and Isaac. 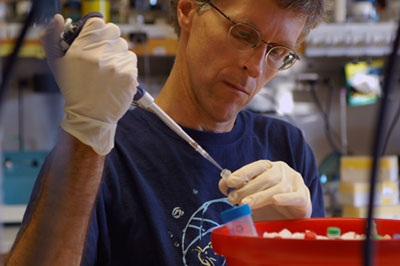