The study of particles onto surfaces displays a wide range of applications. Studies at the nano-scale, which consider physicochemical properties of the flowing particles and the wettability of a surface, are used to understand under what special circumstances do particles adhere to some surface and to what degree does it affect the amount of deposition that occurs. These objectives are used to explore the kinds of surface modifications that are necessary in order to attain some specific particle-surface adhesion relevant to a particular application.

In general, the specific surface chemistry and surface physics in each particle adhesion situation are dependent on the application of the study. To summarize, some of these factors which may be considered include hydrodynamic forces of the particles, particle size and shape, chemical and topographical surface features, concentration or thickness layer of the material deposited onto the surface, and the electrostatic attractions between the two.

Microfluidics provides the perfect tools for further understanding the behavior of these nanoscopic features effecting dynamic adhesion of particles onto surfaces. The technology and devices used in microfabrication allow one to achieve large shear stresses while still maintaining laminar flow, providing a wider range of experimental conditions which can not otherwise be tested at a larger scale. Another benefit of transitioning this study into microfluidics is that it allows one to fabricate more complex designs which can creatively model more complex systems such as microvascular networks[7]. 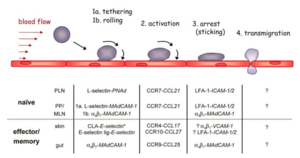 Figure XX Cell behavior during the event of Leukocyte extravasation[7].

Consider looking at Leukocyte Extravasation as an example for understanding cell behavior on functionalized surfaces. During the event, the accumulation of flowing white blood cells in blood vessels are recruited near sites of damaged tissue. The series of behaviors of which these cells interact with the inner surface of the vessels are as follows and is depicted in ""Figure XX"":

As the cells flowing near the functionalized surface [7]:
1. The leukocyte experiences transient tethering and rolling behavior upon first interactions with the inner wall
2. Rolling behavior begins activation of certain integrins prepping its rest phase in stage 3
3. The cells stop rolling and firmly begin to adhere to the inner surface of the wall
4. Lastly, the cells transmigrate through the walls of the vessels into the surrounding infected tissues


The interactions between the cell and inner wall of the vessels depend on the chemical signal of the functionalized surface at each stage. Interesting studies have also been implemented to further understand the hydrodynamic forces of the flowing cells near the surface of which either aid in adhesion or compete with the attraction forces of the functionalized surfaces [5]. In this application, it is curious to understand under what flowing conditions does this affect situations when the cell experiences rolling behavior and when cells adhere firmly to the inner surface wall.

An example of examining the rolling behavior of cells in microfluidics is provided in the video below:

Fouling of materials and devices

More industrial applications include understanding fouling of certain materials and devices in which usually cause depletion in the functional properties of such devices. For example, an accumulation of many substances onto the heat exchanges, such as particulates, sediments, and layers from the result of corrosion, can reduce the efficiency of its work [8]. In addition, fouling can be found commonly in the water treatment industry where microorganisms tend to accumulate on water filters. Biofouling also occurs in biomedical devices and implants where proteins and other non-selective cells adhere to the surfaces of these materials embedded inside the body. The accumulation of these macroparticles often lead to issues of plaque buildup and cause blood clots.

Often the interest in these applications is to develop and use antifouling agents which reduce the deposition of such unwanted particles on the respective surfaces. This helps in maintaining the materials and these devices, allowing them to work more effectively and be more durable long-term. 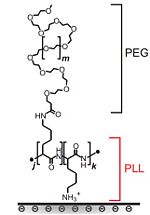 Many surfaces modifications are done by adding what's known as a polymer brush. These brushes consist of a graft copolymer, meaning a copolymer with a backbone of polymer A and sidechains of polymer B. Typically, the brush is made of a poly(L-lysine) (PLL) backbone and poly(ethylene glycol) (PEG) side chains. PLL is cationic, so it may bind to surfaces such as negative silica, whereas PEG is neutral, hydrophilic, and capable of hydrogen bonding. This gives the brush protein-repellent properties[1]. The chemical structure of a PLL-PEG brush is found in Figure 1.

To make a polymer brush surface, a buffer (usually phosphate buffer) is flowed over the unmodified surface to equilibrate. Then, the same buffer but containing the polymer is flowed, allowing the brushes to form. Finally, buffer without polymer is flowed to remove any non-adhered polymer. In the case of PLL-PEG, the PLL tethers to the surface, allowing the PEG side chains to stick up like a brush[5]. This may be seen in Figure 2.

Surfaces may consist of various other modifications, such as with polymer patches or nanoparticle coatings.

There are two main categories of forces affecting particle adhesion in flow, those being hydrodynamic forces and physicochemical forces.

Physicochemical forces include forces arising from hydrogen bonding, electrostatic forces (charge differences), hydrophobicity/hydropholicity, steric forces, and van der waals forces. In practice many if not all of these forces are present, making it difficult to predict particle behavior. However, in controlled conditions desired conditions may be applied, allowing for controlled particle transfer. Essentially, the relative size of all of these forces between the surface and particle result in the adherence or repelling of the particle.

Hydrodynamic forces are those that arise from flow, such as drag. These forces play an interesting role in particle capture, as they may hinder or promote adhesion. Increased flows, and therefore increased hydrodynamic forces, would hinder particle capture by outweighing physicochemical interactions and pushing particles away from the surface. On the contrary, increased flow in turn increases the mass transfer coefficent between the particle and surface, thereby aiding capture[2]. S. Kalasin and M. Santore investigated these phenomena in a silica surface modified with cationic polymer patches (Figure 3), and found what is known as the hydrodynamic crossover. The results may be found in Figure 4. It is seen that this crossover is dependent on the number of sites there are for particles to adhere (surface coverage). Below a certain critical surface coverage, flow hinders adhesion as there is not enough interaction from the surface. Beyond that point, however, increased flow aids transfer and adhesion[2].

There are two main challenges that current work faces. First of all, it is hard to predict all physicochemical interactions and accurately control them. Additionally, when adding surface modifications, there often will be flaws present, such as with polymer brushes there will be patches with no brush or smaller brushes. This in turn may allow, for example, particles to adhere to these flaws when the surface is meant to repel the particles.