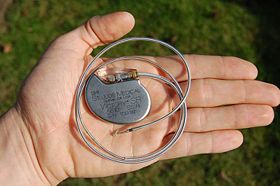 A pacemaker is a device that is implanted into the chest cavity of a person to control the rhythm of their heart. Every human is born with a natural, biological pacemaker that controls the contractions of the heart to pump the blood through the body and meet the oxygen needs of every cell. In certain cases this biological pacemaker breaks down and does not work properly anymore causing heart arrhythmia, strokes, and various other heart problems. One way to alleviate this problem is to surgically implant an artificial pacemaker to automatically control heart contractions. A pacemaker controls the heart by sending low energy electrical pulses to different regions of the heart to control the hearts electrical pulses. [2] [3] 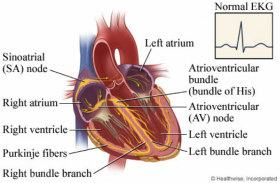 To understand the necessity of a pacemaker, first an understanding of the heart must be developed. The heart is made up of cardiac cells called myocardium cells. These cells are the muscular tissue that pumps blood through the circulatory system. The heart is the main organ of the circulatory system which allows for oxygen transport into the body and different tissues around the body. The circulatory system also helps deliver nutrients and food around the body. Along with this waste products such as CO2 are removed from the tissue and released using other organs. The heart relies on four very important valves which help to stop flow backwards in the heart [1] 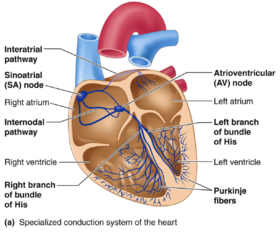 The pumping of the heart relies on a system of electrical impulses to coordinate and complete the very complex muscle contractions necessary to circulate blood around the body. A small group of cells called the sinoatrial node initiates an electrical pulse at the top of the heart. As this electrical pulse flows through the heart from top to bottom the cells contract, building up pressure on the chamber and pumping the blood through the different valves. Both the left and right atrium will pump blood into the subsequent ventricles. Following the contraction of the atriums; the artioventricular node, which sends a second delayed signal to the left and right ventricles, receives the signal. This signal then crosses the septum of the heart by traveling through the his-purkinje system which splits the signal to both the left and right ventricle. The interesting thing about this step is that the right ventricle contracts slightly before the left ventricle. Blood flows out the right ventricle into the pulmonary artery while the left ventricle sends blood out the aorta. This cycle is repeated to send blood to all parts of the body. [1] 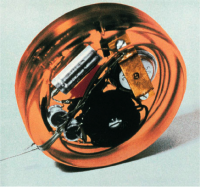 1862 – Walshe suggests that heart could be electrically stimulated [7]

1929 – In Sydney, Australia a baby was resuscitated using an electrical stimulus [7] 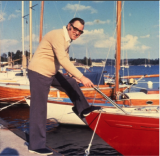 1975 - present – pacemakers have become smaller, smarter and more durable and began being made out of titanium to reduce fouling. [14]

Arrhythmia is a heart condition in which the heart beats in an irregular rhythm, too fast or too slow. Arrhythmia is caused by many different issues and most forms of arrhythmia are not big deal and can be cured by medicine. Different things that cause arrhythmia can be damage heart tissue from heart attack, congenital heart disease, missing or even extra functionalities. If the condition is serve enough a pacemaker is a great way to help elevate the severity of the Arrhythmia. [10]

Supraventricular arrhythmia are fast heart rates that originate at locations other than the sinoatrial node. They are characterized by having fast rhythms which results in build up of blood within the heart which could clot and lead to strokes or heart attacks. Atrial fibrillation is the most common severe arrhythmia and is when the atrium has a very fast erratic rhythm. Similar to atrial fibrillation is atrial flutter which is also a fast rhythm but is instead a regular rhythm. Paroxysmal Supraventricular Tachycardia or PSVT is a very fast heart rate which can generally be stopped quickly with medicine and relaxation. Wolff-Parkinson-White syndrome is a form of PSVT that is extremely dangerous and is caused by an extra electrical pathway from the left ventricle to the right atrium which circles the current in an irregular way. This causes the entire heart to function improperly. [10]

How Arrhythmia is Treated

Arrhythmias can be treated in a myriad of ways many of them are treated qwith use of medicine when possible. Medicine is generally only used to heal tachycardia or sped up hear rhythm. Other times a pacemaker is the only way to control the irregularity of the cardiac conductive system. [10]

Other Reasons a Pacemaker May Be Used

One reason doctors recommend a pacemaker is for bradycardia. This is the slowing of the heartbeat to well below average. Beta blockers, a medication for cardiac arrhythmia control may also affect the heart rate and necessitate the use of a pace maker. One consequence of a low heart beat can be a Strokes-Adams attacks, which is where a victim repeatedly has fainting spells due to low amounts of oxygen getting to the brain from the low heart rate. [2] [3]

Another reason for getting a pacemaker is due to a heart block. Heart block is where the artioventicular node or signal transduction to the ventricles fails to be transmitted resulting in unresponsive ventricles of the heart. The heart’s sinoatrial node may also become damaged and in that case be replaced with a pacemaker. Sometimes if the heart is physically damaged it can affect heart rate and require the implantation of a pacemaker. [3]

Certain heart surgeries can be grounds for implanting a pacemaker into a patient. [3]

How a Pacemaker functions 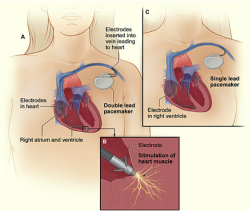 A pacemaker is made up of three important parts a generator/computer, a battery pack, and the leads. The leads are long electrodes which travel through veins into the body and are inserted into the heart at desired locations. These electrodes have the ability to sense the hearts electrical signals and imparting electrical signals. The computer/generator analyzes any of the information obtained from the leads and sends the correct electrical voltage to the correct part of the heart. The battery stores energy so that the pacemaker can function for along time. Pacemaker function on aver about 6-7 years. The life span is dependent on the amount of use. Some pacemakers have the ability to sense many other aspects of the human body. Newer pacemakers have been developed to be controlled via phones and the internet which makes the customizability much easier. [12] 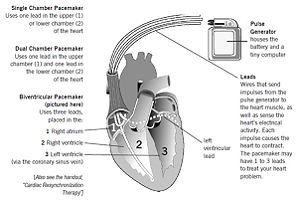 There are three different types depending on what is required for the patient:

Demand pacemakers monitor the heart and only send an impulse when the heart slows below average.

Fixed-rate pacemakers send a pulse at a fixed rate to maintain a normal heart rate.

Rate-responsive pacemakers monitor factors such as body temperature, oxygen levels and carbon dioxide levels to adjust the rate of pulses sent. This is based off of the demand of the body depending on physical activity at that moment.

There are three different ways the pacemaker can be set up:

A single-chamber has one lead coming from the pacemaker either leading to the right atrium or right ventricle.

A dual-chamber has two leads coming out of the pacemaker that attach to the right atrium and right ventricle. 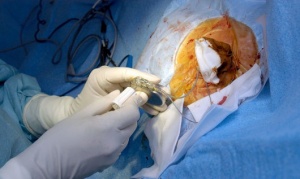 1. Drugs to help the patient relax will be administered through an IV line.

2. Local anesthesia will be administered to the patient to numb the area.

3. The doctor will insert a needle into a vein near the collarbone where the wires will be inserted.

4. These needles will be used to guide the leads into the veins and heart.

5. The wires are inserted and guided by an x-ray machine that will be in real time.

6. After the wires are in place, a small incision in the chest for the pacemaker is made.

7. The pacemaker, which holds the battery and the generator, will slip through the incision and be placed under the skin

8. The wires will be attached to the main body of the pacemaker and tested.

9. The patient is kept overnight in the hospital for observation.

10. Patients can resume normal activity in as little as two days after the surgery.

11. Any heavy lifting may need to be put off for up to a month after the surgery.

12. Periodically the doctor will check the status of the pacemaker over the phone.

This whole procedure is done while the patient is awake but on local anesthesia. The procedure itself does not take long only a few hours and the patient will be able to leave the hospital with in one to two days. Normal activity can be completed within just a few days of the surgery. When the pace maker is about to die, within a few years of implantation, it must be replaced. This process is less intrusive since the leads are already in place just the computer and battery section will be replaced. [12]

Side Effects and Dangers of Pacemakers

Pacemaker surgery is a very safe procedure but there is a small chance of side effects. Possible side effects of pacemaker surgery include bleeding, swelling, infection or bruising. Other more severe possible dangers of the surgery are damage of the blood vessels or nerves near the surgical site, a collapsed lung, or puncturing of the heart wall. [12]