Figure 1. Diagram of a heart and it's nodes [A]

The heart is one of the most vital organs and is responsible for the circulation of blood throughout the whole body. The heart is made up of four chambers which are separated into two sides, left and right. These chambers are the left atrium, left ventricle, right atrium and right ventricle. The separations between these chambers are made up of four different valves. These four valves consist of the tricuspid, pulmonary, mitral and aortic valves [1].

This whole process is made possible by the initial electrical signal from the sinoatrial node (SAN). This is because the electrical impulse causes the depolarization of the cardiac myocytes which then causes the contraction of the heart’s chambers. After the SAN creates its initial impulse, it flows through both of the atria causing them to contract. It then reaches the second node, atrioventricular node (AVN). From here the electrical impulse can then spread through the ventricles creating the second contraction [1].

A pacemaker is a small implanted device that sends electrical impulses to your heart in order to create an adequate heart rate. These devices replace the SAN’s signal and create a small 2-4 mA current in order to contract the heart. Currently there are more than half a million people in the United States with a pacemaker with an average of over 150,000 new ones implanted every year [1]. 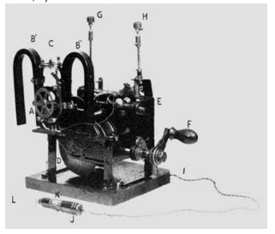 There are quite a few cardiac diseases that require a pacemaker; a few of the common ones include cardiac arrhythmias, syncope, and heart failure. Most of these issues are closely connected and can cause one of the other issues as a side effect. One of the most common diseases, that also leads to many other complications, are cardiac arrhythmias. This is when the heart can’t correctly coordinate its beats, whether it’s an irregular beat, too fast or too slow. One type of arrhythmia is bradycardia; this is where the heart beats too slowly at less than 60 beats per minute. Reasons behind this can be a malfunctioning sinoatrial node or heart block. The first one is just when the main signaling node isn’t working properly. Heart block on the other hand is when the electrical impulses are being blocked from the main sinoatrial node and require the atrioventricular node instead (which is slower). This is a perfect example of where a pacemaker can be of aid by stimulating the heart when it’s not beating fast enough [1,4,8,10].

The other two diseases mentioned relate a lot to bradycardia and its side effects. Syncope, which is fainting, occurs when there is not a large enough flow of blood bringing oxygen to the brain. This is typically due to decreased circulation from the heart which is a symptom of bradycardia. There are two main types of heart failure, systolic and diastolic failure. Systolic failure is when the heart has difficulties pumping blood out. Diastolic failure is when the heart can’t fill up with as much blood as needed. These issues can cause blood to back up into other areas around the body which is known as congestive heart failure [7,9,10].

Figure 3. Rate pacemaker during different activities throughout the day [D]

There are a couple of different types of pacemakers: demand, fixed rate, and rate responsive. A demand pacemaker is where it sends out an electrical signal when the heart needs it (i.e. the heartbeat has dropped below the minimum programed amount). A fixed rate pacemaker sends out electrical signals at the same interval to achieve a steady heartbeat. Rate responsive pacemakers are the most complex of the two. These pacemakers fluctuate based on activity by sensing body vibrations and breathing [3,13].

Of these categories there are three different setups which are based on the number of leads: single chamber, dual chamber, and biventricular pacemakers. A single chamber pacemaker has one lead which is attached to one of the atria or ventricles. With the help of measuring the heart’s voltage difference it knows when to provide electrical stimulation (a form of “demand pacing”). This type of pacemaker is good for a person who only experiences issues periodically. A dual chamber pacemaker has two leads that are in one atrium and ventricle, as seen in Figure 4. This mimics a normal heart beat and is one of the most commonly used pacemakers. A biventricular pacemaker has three leads; the leads are in the right atrium, right ventricle, and left ventricle [1,3,5].

Procedure and Side Effects 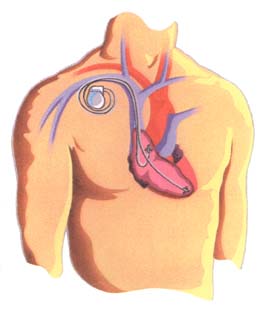 Implanting a pacemaker is a relatively short procedure and typically takes around 1 hour for completion. The patient starts off by taking sedatives and then being put under by anesthesia. Next the doctor makes a small incision, 2-3 inches long, in the upper chest region right under the collar bone. With the help of a real time x-ray (fluoroscopy) he or she guides the leads through a vein into the heart as seen in Figure 4. After attaching the leads to the pacemaker, the surgeon programs the device for the appropriate medical condition. Along with this, the pacemaker is also tested before being placed into the patient. Lastly, the doctor inserts the pacemaker right beneath the skin and stitches the incision back up. On average the patient stays in the hospital overnight for monitoring [6][C].

Although there are not that many negative side effects from a pacemaker surgery, there are a few that could cause serious harm. One effect that is typically observed right after surgery is an abnormal heart beat. This is usually due to either improper insertion or a malfunction of the pacemaker. As with almost all surgeries there is a chance of infection, but it is uncommon due to sterile tools and antibiotic medicine. In some cases there is a chance of damage to the surrounding blood vessels and nerves. This is a result of an accidental incision to either one; however it can typically be repaired with no further side effects. One of the most serious but rare effects is damage to the heart. This is a result of the pacemaker cutting into the heart and causing internal bleeding which requires immediate attention [12].

[6] "Surgery: What to Expect - Implanting a Pacemaker." Surgery to Implant a Pacemaker Is Quick, and Typically Done under Local Anesthesia. Medtronic.com, 2010. Web. 20 Feb. 2013. <http://www.medtronic.com/patients/bradycardia/getting-a-device/surgery/index.htm>.