PLA, PGA, and PLGA as biomaterials, by Colton Kenny 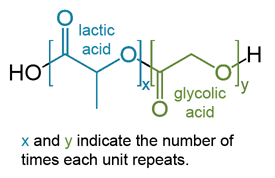 The polymer materials of polylactic acid (PLA), polyglycolic acid (PGA), and poly(lactic-co-glycolic) acid (PLGA) have been shown in recent years to be strong contributors to the development of biodegradable medical implants within the human body, drug carrier designs, and even uses in the packaging industry. The immense utility of many of these polymers were over looked due to their degradation via hydrolysis. The increase in popularity can be attributed to a general increase in demand for biodegradable plastics [1]. More focus on environmental responsibility as well as a push away from plastics produced from fossil fuel sources, create a high demand for plastics that are both biodegradable and able to be produced from organic sources [2].

There are three main areas of use for PLA, PGA, and PLGA plastics: (1) Use a drug carrier in drug delivery applications (2) The promotion of cell growth and organ healing in cell scaffolds and other tissue engineered materials (3) The implementation of plastics in packaging materials [1,2]. It is also advantageous to utilize co-polymer and polymer blends of biodegradable monomers of PLA and PGA. PLGA is the most obvious example of Lactic Acid and Glycolic Acid co-polymerization. Some other common monomers that a co-polymerized with these monomers are malic acid or PEG [2]. Some of the properties that can be modified through blending and co-polymerizing these polymers are biodegradability, hydrophilicity, mechanical properties, physical properties, and surface topography [3,4].

1997 - Formatin of Cargill Dow LLC, to commercialize PLA under the name NatureWorks [5].

The synthesis PLA, PGA, and PLGA can be done under many different mechanisms with main mechanisms being (1) Direct condensation polymerization (2) Ring Opening Polymerization each with its own set of advantages and disadvantages [1,2]. 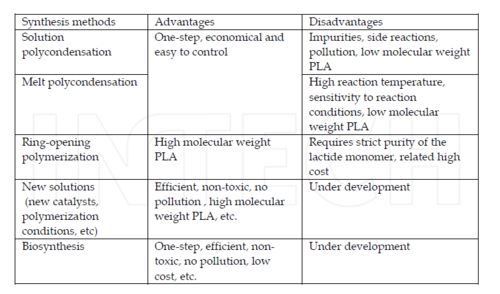 Direct condensation of PLA, PGA, and PLGA is the most simple way to produce these biomaterials, requiring the fewest manufacturing steps and easy modify and commercialize [2]. The main problems facing this method are in generally lower molecular weight product polymers. This is due to an equilibrium in reaction kinetics between the free acid, oligomers, and water produced [2]. Within the realm of the direct condensation synthesis method there are two sub-methods: solution and melt condensation polymerization.

Solution Condensation Polymerization: Solution condensation is advantageous because it only requires monomer and solvent to be reacted with an added heat source (~ 130-140 °C). By using a method of boiling water produced in a PLA polymerization reaction one can obtain relatively high molecular weights (MW ~ 300,000) over long reaction(~2 h) and drying periods using seives (~40 h) [9].

Melt Condensation Polymerization: Melt condensation does not require a solvent to illicit polymerization, but a heat source must keep the reacting solution above the melting temperature of the system (Tm ~180°C). A protonic acid can be added as a cocatalyst, improving the polarity of reacting system and reducing lactide byproducts over long time periods. In addition Results of MW ~10000 obtained [10]. 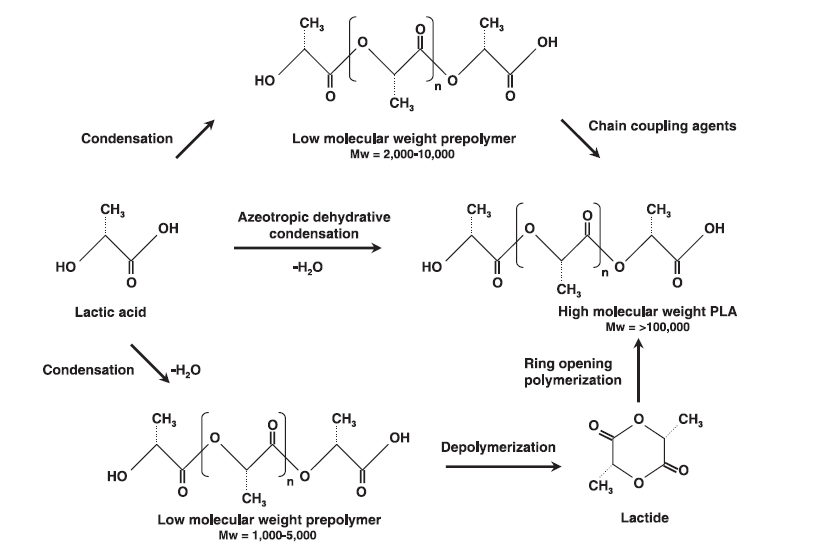 PLGA is primarily established using ring opening co-polymerization of both lactide and glycolide monomers in reaction [1].

Being aliphatic polyesters PLA, PGA, and PLGA are flexible and all degrade at certain pH range. This degradation is conducted via hydrolic cleavage of the ester bonds between monomers. The Lactic acid and glycolic acid monomers can than be further degraded using common bodily processes [5].

There are a certain set of critical factors when considering the bulk properties of polymer systems: chemical components, compositions, and morphological structure. With these factors one can vary hydrolytic groups, hydrophilic groups, and flexibility/crystallinity of the polymer chains. By co-polymerizing one biodegradable monomer with another, one can aid in weak properties of both monomers. PLGA is an example where crystallinity, high melting point, and poor solubility are properties brought to the table with glycolic acid (GA) and a slower degradation rate is shown in lactic acid (LA) [12]. By altering ratios between blends one may create a highly tailorable biomaterial for the needed application.

Surface modifications of biodegradable biopolymers such as PLA, PGA, and PLGA are useful way to instill further biocompatibility to a material that already has applicable physical and mechanical properties to the target environment. There are many effective ways to modify the surface of a polymer product: physical, chemical, plasma, and radiation.

Plasma surface deposition can be shown to be highly substrate independent. This method shows highly efficient thin film deposition, adhesion to the substrate, and provides a surface which is both durable to physical and chemical abrasion [2]. In one case β-glucan (a substance that promotes wound healing in fungus) was grafted onto a PLGA (50:50) substrate via plasma and showed a significant increase cell proliferation [3] Another study showed an increase in cell proliferation on electrospun fibers that were treated with oxygen plasma and in-situ hydrophilic acrylic acid grafting [13].

Many suitable materials can be used for biomedical applications. The main reason why biodegradable polymer components such as PLA, PGA and PLGA are selected over other materials is due to the need for only one implantation surgery (versus the typical case of needing two for implantation and extraction of the material). This can vastly improve a patients quality of life during operations and reduce risk to patient. PLA, PGA, PLGA, and other co-polymers have been approved by the US FDA and many other health agencies world wide for implantation in humans [5]. Even with this approval there have been some issues surrounding a drop in pH around implant area. If the lactic/glycolic acid of one of these biomaterials is degraded at a high rate the region can become more acidic, posing a problem to bone growth. A way that has been explored to combat this is through the addition of calcium phosphates and carbonates to PLLA implants [14]. 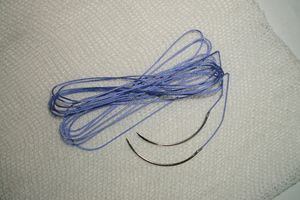 With the tradename Dexon sutures made from PGA fibers PGA have been used to create biodegradable sutures since approximately 1962. A co-polymer version containing both polylactic acid and polyglycolic acid was developed not too far behind in 1974. Unlike conventional sutures these biodegradable sutures can be left in the patient without the need for a removal. There is also a chance of sutures made from other (non-biodegradable) materials to create a foreign body response which is less likely in a bio-compatible plastic [5]. With a co-polymer architecture even the time of degradation can be artfully controlled for certain suture needs.

In early 1990, a PLLA fiber was used to augment a damaged knee ligament (anterior curciate ligament ACL). Traditionally this operation would be executed with autografts (Example: petellar tendons), but in the case where there is no autograft opportunity it has been shown that a PLLA fiber may be used as a substitute [15].

Entangled 20 μm fibers were used in 2004 that were made by melt spinning PLLA (MW ~215,000). These fibers were woven into a felt, then evaluated for their use in the reconstruction of the infraspinatus (IS) tendon in the shoulder [16].

Electrospinning is using electrostatic forces on extruded material to overcome surface tension of said material. This approach provides excellent control over small scale morphology of desired biomaterial. This is extremely advantageous when trying to model the membranes and the extracellular matrix. Many materials can be seen produced through this process with a wide range of applications from drug delivery to tissue scaffolding [17].

Cardiovascular disease is a very big problem within the United States and many other people across the globe. Many times the most viable treatment is the stent of a weakened artery is the use of stents to widen the artery and provide improved blood flow where needed. In the past metallic stents have been used with success to provide this structural support to the cardiovascular system. More recently biodegradable stents have been seen attention as a way to promote healing of these damaged or weakened arteries while allowing for native tissue to repair the affected area. Due to different levels of wound severity, stents may need to provide artery structure support for different amounts of time. The tailored degradation of co-polymer biomaterials allows for this to be accomplished in-vivo without invasive secondary surgery for stent removal.

Saito et al. studies the effects of silcone vs. PLLA airway stents in rabbits. In the study eight rabbits were given silicon stents and eight were given stents made from PLLA. Silicon does not biodegrade and PLLA is known to have a very slow degradation rate when not co-polymerized with glycolic acid. The study found that three out of the eight rabbits with the silicon stents died within 4 weeks, while no rabbits with PLLA stents died during the experiment [18]. This shows the ability of PLLA and similar biomaterials to avoid bodily rejection of implanted stents. 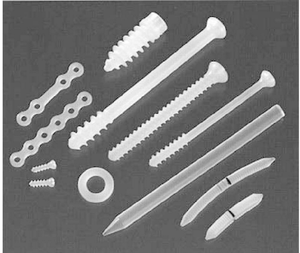 Much like stents these bone fixation devices are conventionally constructed of metallic object in the past. This poses large problems when attempting to use x-ray, CT and MRI imaging devices. Cancer treatment using radiation may also mistarget cancer site in favor of metallic implants [5].

Stress shielding is an effect in a system containing one object of two components of different elastic moduli. In this effect load stress and strain are focused upon the object with lower elastic modulus. In the case of metal bone fixation devices, this load shielding is known to load stress and strain on joint between bone and metallic implant. Due to the softer, modular density attributes of polymer based biomaterials such as PGA, PLA, and PLGA, one can see the advantage over conventional metalic and other rigid objects [19].

In addition to stress shielding mitigation some biodegratable polymer materials are able to emit electrical impulses when a force is applied upon them. This type of small electrical signal has shown to improve bone growth and healing. This ability is known as a piezoelectric effect. This occurs within PLLA crystals due to asymmetric carbon repeating unit of main chain. When this polymer is oriented by a drawing process, an electrical potential difference can be witnessed across the material [5].