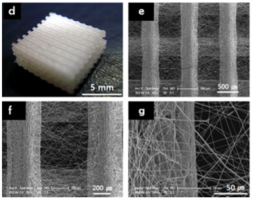 Polycaprolactone (PCL) is versatile polymer used in the fabrication of various types of long-term degradation biomaterials. The rheological and viscoelastic characteristics of PCL makes it easy to manufacture and produce compared to other aliphatic polymers for similar applications [1]. Low production costs and the ability for modification via copolymerization allow polycaprolactone to be manipulated for a variety of different biomedical applications. Relevant applications include: various drug delivery systems, medical devices such as sutures, contraceptive devices, wound dressings, and dental implants, scaffolds for tissue, bone, cartilage, tendon and ligament, cardiovascular, skin, and nerve engineering.

A biomaterial is any synthetic or natural material designed and engineered for biological interactions during a medical treatment or procedure. Engineered biomaterials must be biocompatible, have an appropriate biodegradation time, have applicable mechanical and permeability properties, and be non-toxic. Polycaprolactone has a low tensile strength, but a high elastic recoil [2]. PCL also has high drug permeability and biocompatibility [3]. A low degradation rate (3-4 years) makes PCL more suitable for long-term degrading implants and applications rather than short-term degrading drug delivery systems [2]. Various PCL drug-delivery devices have been FDA approved and have CE Mark registration, enabling for a potentially faster track to the market.

2009: Powell and Boyce electrospun a blend of PCL and collagen to form a composite for engineered skin

PCL is a hydrophobic, semicrystalline polymer with a glass transition temperature of -54°C and a melting temperature of 55 - 60°C [1, 2] . Polycaprolactone is soluble in many organic solvents (chloroform, dichloromethane, carbon tetrachloride, benzene, toluene, cyclohexanone, 2-nitropropane) and is insoluble in alcohols and water [4]. Different blends of polycaprolcatone and other polymers can be used for various applications and to modify the tensile strength, permeability, rate of drug release, degradation time etc. Some monomers that can be copolymerized with PCL include: polyvinylchloride, polyethylene glycol, polystyrene, styrene, methyl methacrylate, and vinyl acetate.

The two main methods of polycaprolactone synthesis include the ring opening polymerization of ε-caprolactone using a catalyst and the polycondensation of a hydroxycarboxylic acid (6-hydroxyhexanoic acid). Alcohols with low molecular weights can also be used to manipulate the molecular weight and degradation of the polymer.

There is a limited numbers of sources that describe the specifics of the polycondensation of hydroxycarboxylic acid in detail. Braud et al. described the synthesis of PCl oligomers via the polycondensation 6-hydroxyhexanoic acid under vacuum [1]. This method was performed without the use of a catalyst and was completed in 6 hours. This method of PCL synthesis is less common as it produces less desirable variations of the polymer.

The biodegradation of a biomaterial after it has served its intended purpose is an important factor to consider in the design and construction of a biomaterial for particular biomedical applications. PCL cannot be biodegraded in humans and animals by enzymes, but is able to be degraded and bioabsorbed. The poly(α-hydroxy) esters of the PCL are hydrolytically degraded. The rate of degradation depends on the molecular weight, crystallinity, and conditions of where the polymer is degraded. 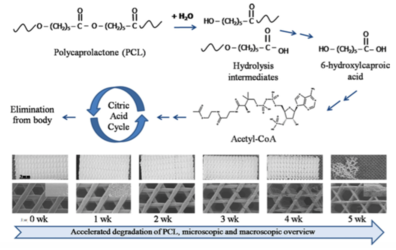 There are two different ways that the PCL can be degraded. During surface degradation, the backbone of the polymer is hydrolytically cleaved at the surface of the PCL biomaterial. When this happens, the surface of the biomaterial is degraded and diffused into its surroundings at a faster rate than water can enter the polymer. This process leads to the gradual degradation and decrease in size of the PCL biomaterial without affecting the overall molecular weight, which provides release rates trends for drug delivery. Another type of of degradation that could occur is bulk degradation, where water is able to permeate into the polymer allowing hydrolysis to occur within. The increased degradation rate inside the polymer lowers the molecular weight of the internal PCL structure, while the outside shell of the PCL remains at a higher molecular weight. Eventually, small oligomers are able to diffuse out of the outer shell of the structure and the fast rate of oligomer diffusion and creation of acid by-products can lead to a potential inflammatory reaction [1].

PCL is more applicable to long-term drug delivery systems due to its long biodegradation period. Although PCL’s low solubility in water can disrupts its ability to deliver certain types therapeutic drugs, advantages of using PCL for drug delivery include: high permeability and biocompatibility. An example of a drug delivery system are PCL microspheres, where a drug can be encapsulated and can be administered via ingestion or injection. The longer degradation time of PCL can potentially lower the frequency of administration. 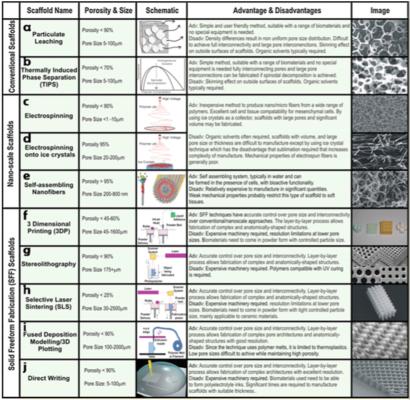 PCL can be applied to numerous types of medical devices. A copolymer of PCL and glycolide provides sutures that are less stiff than sutures solely made with polyglycolide (Monacry®) . Currently available sutures made with PGA (Dexon™) and PLLGA 10/90 (Vicryl®) are prone to causing an inflammatory response at the site. In wound dressings, a thin layer of PCL can be utilized for dressing wounds, antiseptic compounds can be incorporated into the dressing for release [7]. Other common uses for PCL include: contraceptive devices, fixation devices, and dental fillings and sealers [1].

The versatility of PCL and the ability to manipulate the mechanical properties makes PCL a suitable option for tissue and scaffold engineering. Ideally, an implanted polymer scaffold would have a degradation rate that coordinated with the rate at which it was replaced with tissue regrowth [1]. Different methods of scaffold synthesis will yield varying types of scaffold with different levels of porosity and pore size. Examples of different scaffold generation include: particulate leaching, electrospinning, self assembling nanofibers, 3D printing, and direct writing. The surface of PCL biomaterial can also be modified chemically and physically to improve the biocompatibility of the implant.

For bone engineering, PCL scaffolds can fabricated for bone regeneration at load bearing sites. An example of a biomaterial is Artlelon ®, which is made into fibers, scaffolds etc to aid and support the healing tissue and the degradation of the material was also safe and biocompatible. In cartilage, lack of blood supply and healing capability of damaged cartilage calls for a scaffold that would be structurally compatible and could be loaded with cells and biomarkers that would promote proper cell differentiation and repair of the cartilage [1].

PCL films were used to attempt to reconstruct damaged tendons and ligaments, scaffolds can be to repair valves by providing a stable structure to regrow cells, which can potentially replace the use prosthetic valves in cardiovascular engineering. The elasticity of PCL is advantageous for the creation of scaffolds for vascular tissue engineering. Electrospun PCL/collagen scaffolds allowed for vascular cell adherence and they were able to preserve their mechanical properties. They also had mechanical properties similar to that of natural arteries [8]. PCL composites were used for both skin and nerve engineering. In skin engineering, appropriate mechanical properties and sufficient cell adhesion is needed for a scaffold that would be able to support the regeneration of skin. Similarly in nerve engineering, studies have used PCL composites to create nerve guides to aid in the regeneration and reconstruction of nerves. In his study, Dendunnen saw improvement of motor and sensory nerve function after 18 months of implantation of the nerve guide [9].

PCL blends can be applied to the engineering of nerve guides to help the reconstruction of peripheral nerve discontinuity. 20 million Americans suffer from peripheral nerve damage from with injury or a medical condition [10]. A nerve guide would protect the nerve regrowth, prevents growth of other tissue in the nerve gap, and prevent tangling. Neurolac® nerve guide was able to provide 10 weeks of support and protection for the nerve and would experience rapid degradation after, allowing for reabsorption by the body in 16 months [1]. The degradation products include: lactic acid and hydroxyhexanoic acid. After 2 years of implantation, there were no macroscopic remnants of the biomaterial, but small fragments, multinucleated cells, and macrophages could be found at the site of nerve regeneration. Further body reactions and complications due to the biomaterial fragments beyond 2 years are still unknown [11].