The Péclet number (Pe) is a dimensionless number that represents the ratio of the convection rate over the diffusion rate in the a convection-diffusion transport system. [1][2]

U represents linear flow velocity in the control volume, L represents the length scale of the flow and D is the diffusion constant. This number can also be represented as a ratio of diffusive to convective time scales. The units, in a microfluidic setup, for U, L and D are um/s, um/s and um2/s respectively.

In diffusion dominated regimes, the Peclet number is less than 1. Such is the case with microfluidic systems, where turbulence is low. In convection dominated systems, this number is greater than one.

Figure 1 This is an illustration of a control volume with fluxes in and fluxes out. If sources and sinks can be neglected, these fluxes can be contributed to convection and diffusion

If there are gradients in the system, the flux out of the system can be described as follows.

Thus, the mass balance can be simplified as shown below.

This equation is also described in three dimensions.

The assumption of negligible sources and sinks are made, so as to focus the system on diffusion and convection. Thus,

Diffusion equation can be derived from first Fick's law as shown below. [math]\displaystyle{ D }[/math] is the Diffusivity constant.

Diffusive flux and Convective flux can be combined into the overall mass balance.

Because the relation below can be applied, where [math]\displaystyle{ u }[/math] equals velocity of a particle, the mass balance can be simplified and described in multiple dimensions

Dimensionless numbers, as shown below can be used to restate the mass balance. [math]\displaystyle{ U }[/math] equals the convective linear flow rate.

When these numbers are applied, the balance is described as shown.

The first term in the above balance is referred to as the unsteady term. In time invariant flows, this term equals zero. The ratio between the remaining two terms (i.e. the diffusive and convective terms), equals the Peclet number, as described below.

Figure 2 Diffusion dominated mixing that occurs in a T-sensor makes it useful in florescence based analytical tests. The analyte (in blue) diffuses with the species in the channel as a function of the length of the middle channel. [5] 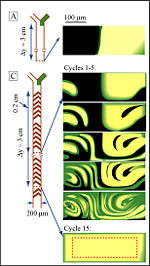 The low inertial forces present within many microfluidic setups, due to low velocity and length scales, often yield low Reynolds number flows [4]: low levels of turbulence can also be expected in these flow regimes. Thus convection is not prevalent in microfluidic setups, unless it is purposely induced. The mixing that does occur in these devices occur due to diffusion [4]. Diffusion induced mixing is much slower than convective mixing, with speeds lower by several orders of magnitude. [4]

In units where quick mixing is not desired (for example, analytical tests or separation systems), low Pe (of less than or around 1) is ideal. T-sensors, as shown in Figure 2, are an example of a class of analytical devices that benefit from low Pe. T-sensors are used in many competitive immunoassays, where antigen and antibody are input into the T-sensor. Given the known diffusion pattern that are expected, as shown in Figure 2, any deviation from this pattern indicate antibody binding. T-sensors can also be used in simpler cases, such as to quantify the diffusivities of the analyte and reaction kinetics since the effects of turbulence are neutered [4]. Separation is also possible without the use of membranes in microfluidics, due to low Pe, as evidenced by the H filter, shown in Figure 3. H-filter takes advantage of the fact that larger species have lower diffusion constants than smaller species. Proteins, for example, have diffusion coefficient three orders of magnitude larger than that of salt ions [4]. Separation can be achieved in a 'H' shaped channel, where a mixture will enter on the ends of the 'H' and a separation will occur such that the larger specie will exit the bottom of the same side, while the lighter specie will traverse the middle section of the H onto the other side.

In units where mixing is desired, such as reactors, Pe>>1 is necessary. Convection desired to produce large Pe can be provided with many methods such as using stir bars or using etched channels that induce vortices, as shown in a herringbone mixer in Figure 4.