CHEM-ENG 535: Microfluidics and Microscale Analysis in Materials and Biology

Rapid prototyping and additive manufacturing are the fancy descriptive terms for the technology commonly known as 3D printing. This is a technology where crude materials are processed by a computer controlled machine to create and form objects and functioning devices from the instructions given by the computer aided design. 2D printing which was developed in the 15th century changed the world as far as being a catalyst for the education of society and the higher minded development of the world population. The development of 3D printing is now in this century having a revolutionary impact on science and education. 3D printing was first developed and described in 1986 when Charles W. Hull invented a stereolithography 3D printing method where thin layers of material cured by ultra violet light were printed in layers to form a 3D structure. 3D aims to bring the words off of the page and bring  society to a higher developed level by allowing advanced technologies to easily be developed such as microfluidic devices. "Typical materials used in rapid prototyping are types of plastic, which can be extruded through a nozzle into various shapes. By controlling the rate of flow and repositioning the nozzle, the computer can create virtually any shape. Objects are built in thin printed layers forming a horizontal cross-section of the eventual object. After the plastic hardens, the newly created object can be removed and used for its intended purpose." (Lee Lerner).

Types of 3D Printing technology and applications in Microfludics

How does 3D printing play an important role in the fabrication of microfluidics devices? There are some key functions of microfluidic device that includes separation of liquids and samples detection and fluid manipulation. By using 3D printing the time needed for the fabrication process is greatly reduced and it can be done with just one machine and fully automated which allows the process to be easily replicated. The 3D printing offers the opportunity to fabricate the whole microfluidic device in a single step without the need of the assembly step.

Stereolithography (SLA) was the first commercialized 3D printing machine. A UV laser was used to scan the material and hardened by using high powered laser and builds layer by layer. A major advantage of SLA fabrication is the very high precision of the surface resolution. A good example of a microfluidic device created by the SLA is the immunomagnetic flow assay on-a-chip designed by Lee and team [1]. This experiment is a great example of how works that were previously restricted to laboratory due to their size can now be studied with the aid of 3D printing. The commercialized 3D Viper SLA system printed a cylindrical 3D micro-channel named as a High Capacity Efficient Magnetic O-shaped Separator(HEMOS). (Figure 1)

Digital Micromirror Device-based Projection Printing (DMD-PP) is another type of 3D printing technology. It is a projection system that uses a controllable digital mirror to reflect laser light in an entire plane which then allows the curing of an entire layer at a time. (Figure 2) Compared to SLA system the DMD-PP the building structure is bottom-up different from the SLA which require the stage to move as well as the laser. An example of microfluidic device created using the DMD-PP is the 3D in vitro microchip which is made of hydrogel with a honeycomb structure which allows the microchip to mimic the 3D vascular morphology of an in vivo micro environment.[3] 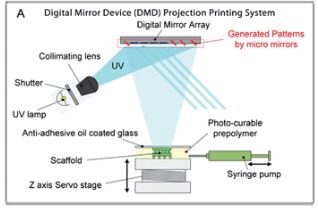 Integration of 3D printing and microfluidics is gaining traction, but there are still a few concerns and limitations which are keeping it from becoming ubiquitous in the field. The materials, resolution, cost, and speed are the leading of these concerns [1-4]. The current spate of commericalised materials are largely toxic in biological applications, which has been a major deterrent for many microfluidics researchers, despite its rapid turnaround time [1]. Some argue, however, that it isn't that biocompatible resins don't exist, but rather that the long list of non-biocompatible resins are being artificially propped up by manufacturers for other commercial gain [3-4]. The hydrogel-based resin PEG-DA, for example, has been around so long it is no longer restricted by patent and is relatively inexpensive [4].

When considering cost vs. resolution, many people gravitate towards soft lithography because 3D printers have notoriously been hampered by high viscosity resins and cannot achieve desired resolution [1,2,4]. That being said, Single- and double-photon stereolithography (SL) printers have been slashing previous resolution limits and are quickly approaching 1 μM feature capability. Combined with the drop in cost, SL likely will overtake soft lithography because there are practically no restrictions on aspect ratio as compared to PDMS construction [4]. As for speed concerns, while some merely cite high resolution printers as too slow, there are also concerns over how to integrate multiple materials, pumps, valves, or other modules into a 3D printed device. [4,5]. However, several researchers have already demonstrated multi-material printing by using two printers in combination, which incidentally helps reduce total time [4,5]. For instance, one could use a low-resolution SL printer to develop the structure of a device, while a single-photon SL printer develops the finer features where higher resolution is important. Aguilera et. al 2013 also demonstrated the construction of a complete electric motor by simply pausing the printing process to insert bearings, magnets, etc. by hand [5]. It could be expected that eventually, a more complex robotic tool could insert valves, pumps, or other modules automatically during the printing process.

One advantage that 3D printing has over soft lithography is the possibility of completely open-source database of designs and techniques [3,5]. If this is utilized, it enables POC device development worldwide, as long as there is a 3D printer available [5]. It may be a long way off, but the potential for truly global accessibility is an inherent advantage that no other manufacturing technique offers. Of course there are several key roadblocks to this happening. First, there needs to be agreement on file type. Since many microfluidic devices are still made without 3D printing, conversion of all designs to .STL files would likely be required to have a truly open-source, global database. However, this conversion would enable more rapid development of 3D printing technology, and could minimize errors caused from attempts at reproducing published works as well [3].

Microfluidic chips, including lab-on-a-chip (LOC) devices have generally been limited to two-dimensions. However, given the advancements in 3D printing, multi-level, three-dimensional microfluidics are expected to become widely used methods for complex analysis. Whereas two-dimensional microfluidic devices have allowed relatively complex analysis by combining channels with fully integrated sensing and valving technologies, 3D printing allows for expansion of these devices into another plane [5].

Once three-dimensional complex microfluidic networks can easily be developed, one could expect the field of tissue engineering, or “bioprinting” to rapidly accelerate. Bioprinting is the deposition of biocompatible materials such as cells to create living tissues in specified shapes. This complex integration of multiple fields theoretically could enable any tissue or biological material to be printed or reprinted. This technology already exists in limited capacity, as with cartilage replacement, skin and bone grafts, etc. However, the future of 3D bioprinting suggests entire organs being “printed” rapidly [2,6].

There are several hurdles that need to be overcome for before bioprinting of tissues can be widely available. The biggest concern is biocompatibility. The printed tissue should not induce any inflammatory response from the host and should degrade at the same rates as the tissue it would be replacing. Next, the structural integrity and properties of the material need to match that of the original tissue. This is a major hurdle, because it requires the coordination and collaboration of materials science, engineering, biology, and physics. While interdisciplinary research is certainly happening, the barriers of siloed research are still apparent [6].

One goal for bioprinting is to develop easily manipulated or potentially even adaptive materials that respond to electric or other impulses, as human tissues do [2]. Given all these hurdles are overcome, several exciting possibilities unfold. When bioprinting matures, integration of 3D printers with robotic surgical tools could enable in vivo generation or regeneration of compromised tissues [2,6]. Since bioprinted organs require so many cells, the current outlook for complete, solid organs is still long-term. However, miniature versions of organs that perform specific, vital functions of the parent organ are not too far off. With the combination of a bioprinter inside of a bioreactor, these "mini" organs could be produced relatively quickly. Take for example, a miniature pancreatic-like organ that could monitor and produce insulin for diabetic patients. Or, imagine the development of new organs that could offer expanded or superior human functionality [6]. All of these things are possible with the development of 3D printing technology. 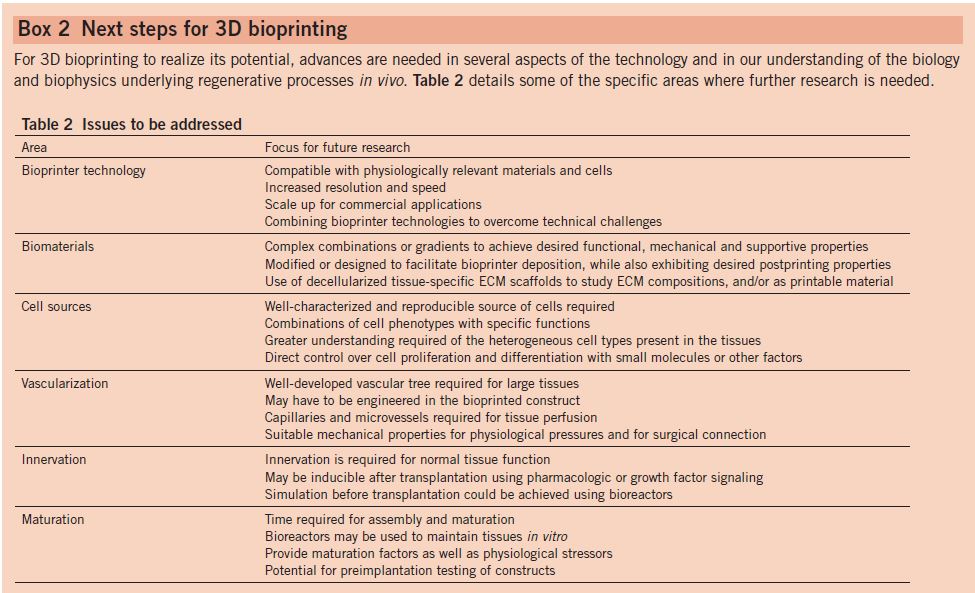 Types of 3D Printing technology and application in Microfluidics