Welcome to our OWW homepage! To get further information, please visit our lab homepage! 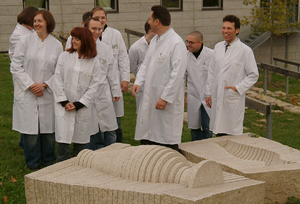 Volatile anesthetics not only induce anesthesia, but also render organs resistant against ischemic damage. For example, the magnitude of an experimentally induced myocardial infarct size can be reduced by more than 50% by the administration of volatile anesthetics, even if the administration has been discontinued prior to the ischemic injury (anesthetic-induced preconditioning, APC). These protective effects are also effective in other organ systems; e.g. the brain. APC is as effective as ischemic preconditioning and thus represent one of the most potent therapeutic strategies of infarct size reduction. Surgery-related temporary ischemia of the heart or the brain can be prevented using APC in the perioperative period.


However, infarct sparing therapies can often only be applied after the patient’s admission to the hospital. Even in this situation the patient can benefit from the application of volatile anesthetics.Recently, it has been described that volatile anesthetics also exert cardioprotective properties when administered after the ischemic injury (anesthetic-induced postconditioning, APOST). This might be of enormous therapeutical implications since myocardial ischemia is often unpredictable.


The intracellular mechanisms underlying APC and APOST are under intense investigation. The projects performed by our group aim to identify triggers, mediators and end-effectors of anesthetic-induced pre- and postconditioning and to characterize their complex intracellular interaction. Particularly, we focuse on ß1- and ß2-adrenergic receptors and their downstream targets. Given the large incidence of perioperative cardiovascular morbidity and mortality and the incidence of myocardial and cerebral infarction, the results of these projects are of high clinical relevance and might provide a better understanding of the cardioprotective properties of volatile anesthetics. They might help to choose the appropriate and protective anaesthesia regime to alleviate cardiovascular mortality and apoplectic insults in the perioperative period.