Organovo Incorporated was founded in 2007 in Delaware as a 3D bioprinting company. Its bioprinting foundation was based off of the research and patents of Gabor Forgac, a researcher at the University of Missouri-Columbia. Shortly after its creation, Keith Murphy, the prior director of process development at Amgen, became its first CEO. The company's headquarters has been in San Diego, CA since 2009 though they have several offices across the globe. The company has over 100 employees globally, boasting an annual revenue of $0.6 million in 2015. Their focus has remained to be using bioprinting technology to create tissues and organs for use in preclinical drug testing [1]. Their most notable achievements have been in the development of a human liver model and breast cancer tumor model that have shown great results in preclinical testing [2][3]. In addition, Organovo has partnered with several high-profile companies such as L'Oreal and Uniquest as well as Yale University to further develop bioprinting technology. Despite their rapid growth and success, the stock prices of Organovo, Inc have been on the decline for the past two years [1]. 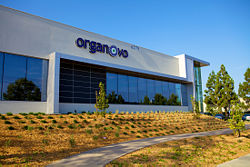 2004: Gabor Forgac began his work in 3D printing and filed a patent for the NovoGen bioprinting platform.

2009: Organovo moves its headquarters to San Diego, CA and creates its own laboratory. 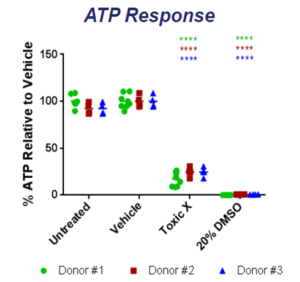 The graph above demonstrates the reproducibility of exVive3D tissue made from three separate patients in several environments. [5]

The 3D tissue model is created using a bioprinter based off of the NovoGen MMX Bioprinter model [1][2]. The printer uses several cell types to create a dynamic model that mimics actual liver tissue both in structure and in function [4]. The printed tissue has been shown to exhibit similar behavior to that of native human tissue, being able to replicate necrosis, steatosis, and several other conditions when exposed to different toxins [5][6]. The tissue is also able to create all of the important liver metabolites such as albumin, transferrin and cholesterol [2][6]. Since each tissue is grown using a single donors' cells, each of the mentioned experiments have been done for several donors to show reproducibility in quality . Highly reproducible results between several printed samples from the same donor have also been shown. The printed tissue maintains its structure and functionality for over 40 days making it ideal for research [2][4][5][6][7]. In studies done on ATP and albumin production, the tissue shows an increase for the first 14 days followed by relative stabilization for over 26 days [4]. The advertised use of the exVive3D liver tissue is in drug testing in the preclinical phase and other in-vitro medical research. The company also creates custom tissues to replicate desired conditions at the request of researchers [1]. To show the efficacy of their model, Organovo researchers exposed the printed tissue to compounds and compared their effects with the effects on native tissue. Some of the compounds tested were dimethylsulfoxide, Diclofenac, Rifampicin, and Midazolam. All of the tests showed multi-factorial issues that were consistent with tests done with actual liver tissue [4][5][6]. Research done at the University of North Carolina actually showed how exVive3D tissue was used to study drug-induced hepatic fibrosis. Using the tissue, researchers were able to closely observe the effects of known fibrotic agents over the course of 14 days [7]. 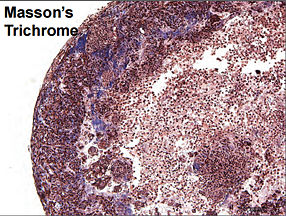 Typical breast cancer models are 2D models that are often insufficient for the complexities involved with carcinogenesis and metastasis. The model printed by Organovo have cancer lesions surrounded by adipose, mammary fibroblasts, and endothelial cells. The fabricated tissue is able to secrete the same molecules that an in-vivo tissue would release such as extracellular matrix (ECM), growth factors, and hormones. The production of ECM by the cells allows the tissue to function without a synthetic scaffold [3]. The endothelial cells are also used to create networks of blood vessels to create a more accurate model. The study also showed that the systems were stable for 14 days without having any loss of function or structure. The model was further tested by looking at the effect of estradiol, progestin,prolactin, human growth factor (HGF), cisplatin, paclitaxel, methotrexate, and tamoxifen. When compared to 2D models, the 3D model made by Organovo showed completely new outcomes; a result of the more robust and complete tissue structure [3]. The breast cancer tissue model shows little use beyond the research funded by Organovo, but custom orders can be made on the company website [1].

The video below shows the bioprinting process using a NovoGen MMX Bioprinter [1]. 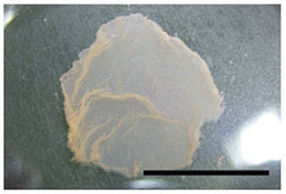 One of the common methods of synthesizing functional liver tissue is simply growing it in petri dishes. One of the studies, done by Kazuo Ohashi, utilized cells from transgenic mice (hA1AT-FVB/N) to create a layer of 2D liver tissue. His research group used poly(N-isopropylacrylamide) (PIPAAm) as the base for the petri dish due to its thermally-sensitive structure. Once the cells had enough time to grow, they decreased the temperature and this results in a structural change of PIPAAm, causing the complete detachment of the cells [9]. Using this technique, they were able to create a 2D layer of uniform tissue without any scaffolds. While this tissue and similar cell culture tissues do resemble actual liver tissue, the procedures do not lend themselves towards mass production for drug trials such as the exVive3D tissue. Furthermore, the tissue by Dr. Ohashi only contains hepatocytes while actual liver tissue consists of other types of cells such as adipose. This prevents the observation of complex intercellular interactions. The exVive3D tissue model fixes both of these issues. The 2D nature of the hepatic sheet is also less robust than a 3D model. As such, Dr. Ohashi actually stacked several 2D sheets to attempt to create a 3D model. An important distinction between the exVive3D liver tissue and the one made by Dr. Ohashi is their purpose [9]. The exVive3D liver tissue is for in vitro studies while Dr. Ohashi's goal was to create an in vivo graft. Further research into how this model works in response to drugs or toxins is needed for a full analysis. While this research used transgenic mice, it is also necessary to see the effect of using human donor cells to create the tissue. While the exVive3D model has several advantages over cell cultured tissues, one clear advantage of methods like Dr. Ohashi's is that it can be done very easily without highly specialized equipment such as the NovoGen bioprinter.

The results of drug testing in animal models often do not translate well into human models. One of the ways to get around this issue is to use animal models that actually contain partially human organs or tissues; known as chimeric animal models. In an attempt to create a small animal model for the hepatitis C virus (HCV), a research group at the University of Alberta led by Dr. David Mercer implanted human hepatocytes into the livers of genetically-modified mice [10]. Since HCV causes liver disease, this would be a way to measure the spread of the virus in mice and observe the effects. While they were successful in creating mice with chimeric livers, PCR showed the presence of human and mouse DNA in the liver. For HCV, this was stated to be a great model but other tests may show incompatibility between the human and mouse parts of the liver when dealing with a drug or toxin [10]. Another issue is the difficulty in actually creating these chimeric animal models. They require micro-surgeries for each mouse, and control over tissue growth is very limited [10][11]. In a study done by Dr. Chise Tateno's research group, they found that chimeric mice die if more than 50% of their liver is replaced by human tissue unless they are treated with anti-human complement factors. This prevents severe immune responses against the foreign tissue. With the factors, they are able to obtain between 70% and 96% replacement [11]. The low reproducibility of chimeric animal models do not lend themselves to use in the drug pipeline where the efficacy of different drugs are compared. Similarly, the length of preparation and level of maintenance that are required for these animal models do not fit within the scope of high volume testing. While exVive3D tissues excel where chimeric animal models fail, the same goes for the inverse. Drug testing done in chimeric models take into account all of the systems that make up an entire organism. This gives more absorption, distribution, metabolism, and excretion (ADME) data in addition to other pharmacokinetic and pharmacodynamic parameters.

Cryopreservation procedure for storing liver slices for future use. Was first described by Kanter and Koster in 1995 [13]

Perhaps the simplest model uses slices of actual liver to obtain experimental data. Human liver slices are rarely used due to their high cost and low availability. A study done by researchers in Canada led by Dr. Catania took liver and kidney slices from transgenic mice to evaluate toxicity and determine their viability for in vitro studies [12]. Dr. Catania tested how liver and kidney samples responded to β-napthoflavone and phorbol myristate acetate. While their study was successful in showing the desired response, it also demonstrated the problems that are common to using tissue slices. The research showed a viability of only 4 hours before rapid loss of function. Their research also found issues with the fluidity of some samples of tissue. When samples were too soft, they were cooled at around 2°C to fix the issue [12]. Some of the benefits of using liver tissue slices are its simple preparation, identical structure to actual liver, and long history of usage in prior studies [13]. Unless slices are being used immediately after precision cutting, they must be stored using a time-consuming cryopreservation procedure, a large problem for bulk usage for pharmaceutical companies. One of the largest downsides to using liver tissue slices is its availability. Especially when considering human samples, livers are often used for transplants rather than in research [13]. As a result, animal slices are often used. Like full animal models, results do not translate well into human models when using these slices. One of the current goals of Organovo is to actually replace liver tissue slices by providing similar models such as their exVive3D human liver tissue model.

A newer in vitro model is the microfluidic 3D liver model. Dr. Knut Rennert's research group has recently synthesized a biochip that is able to accurately mimic human liver models [14]. The biochip incorporates a variety of cells, called non-parenchymal cells (NPCs), that are essential to liver function, but are often ignored in other models. Kupffer cells, stellate cells, and endothelial cells are examples of NPCs; they consist of "about 40% of total liver cells." Since NPCs are an integral part of normal, in vivo liver function, models that do not include these cells are inaccurate. Dr. Rennert's device monitors nutrient usage, oxygen consumption, and metabolite formation under near physiological conditions while maintaining stability for around four days [14]. Microfluidic biochips like this one have incredible potential in the drug discovery pipeline. While the exVive3D model has a greater than 40 day stability that can be used to test short-term and long-term toxicity, biochips have the potential to be much cheaper alternatives.