Organogenisis Inc. is a Massachusetts based company focused on bringing the potential and advances of regenerative medicine to patients in a clinical setting through living cell-based therapies. More importantly, Organogenesis is one of the earliest tissue engineering companies to become profitable. Current areas of key focus are Oral Regeneration and Bioactive Wound Healing. Their most successful products to date are Apligraf, VCT01, and Gintuit. They are headquartered in Canton, MA and their current President & CEO is Geoff MacKay who has been serving in that capacity since 2003.

Organogenesis was founded in 1985, initially from work part of an MIT research program [1]. Their efforts upon founding were largely research based, but with the development of cell based therapies they gradually moved into development and finally into manufacturing. The company entered into a marketing agreement with Novartis AG, a Switzerland based pharmaceutical giant in 1996 after repeated attempts to purchase Organogenesis developmental products [2]. Organogenesis was the first to receive FDA approval for a living, allogeneic, cell based prduct, Apligraf, for treatment of venous foot ulcers in 2000. The costs of producing Apligraf were too high for Organogenesis to sustain and in 2002, the company terminated its marketing agreement with Novartis and filed for bankruptcy [2], reducing their staff 125 to 15 [3]. Coming out of bankruptcy, Organogenesis had a short term restructured deal which allowed Novartis to retain exclusive rights to sell Apligraf through June of 2003 and was able to almost immediately rehire 70 of the workers they were forced to lay off a year earlier [3]. As of 2006, the company had grown to 205 employees, including a 65 person sales force, which has allowed the company to develop, manufacture and market its products entirely on its own [4] and has since been able to introduce new products, most recently receiving FDA approval for Ginituit in March 2012 [5]. In 2009, Organogenesis was the recipient of a $7.4 million grant through the Massachusetts Life Sciences Center (MLSC) to facilitate major expansion of its company headquarters in Canton, MA [6] which was completed in September of 2010 [7]. Through further use of that grant, the team of Organogenesis and MSLC broke ground on what will be the world’s largest automated live cell manufacturing plant in April of 2011, projected to be completed in 2013 [8]. 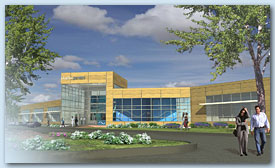 1985: Organogenesis is founded as an offshoot of MIT based research to further develop bi-layered living cell-based technology.

1998: First FDA approval of a living, allogeneic, cell based product (Apligraf® approved for the treatment of venous leg ulcers).

2000: Apligraf® FDA approved for the treatment of diabetic foot ulcers. 2002: Organogenesis terminates it’s marketing agreement with Novartis, files for bankruptcy and is forced to lay off one hundred employees while halting production.

2003: Organogenesis emerges from chapter 11 bankruptcy, retaining its rights to Apligraf and allows a restructured marketing agreement with Novartis to expire.

2011: Groundbreaking on new automated live cell manufacturing facility projected to be the largest in the world when completed in 2013. 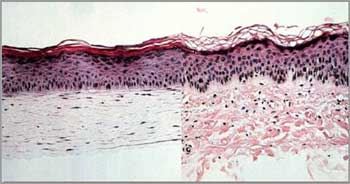 Apligraf is a bi-layered human cell based product manufactured to model human skin as a treatment for chronic wounds. Chronic wounds are difficult to treat as they are very prone to infection during healing, which is often slow or unable to close the wound on its own. Synthetic bandages often are unable to keep the wound site clean or facilitate healing. Apligraf’s bi-layered construction closely resembles natural skin. A collagen matrix is seeded with fibroblasts to form a dermal matrix. Keratinocytes are seeded onto that dermal matrix to form a dermal protective layer, forming the second layer. The manufacturing process takes about 20 days [10], and has a shelf-life of 10 days. The human fibroblasts and keratinocytes are derived from neo-natal foreskins [11], while the collagen matrix is currently consists of bovine derived collagen. Because the cells are living, they are able to produce naturally occurring growth factors that can aid in the recruitment and development of new skin in the closing of the wounds. According to Organogenesis, over 250,000 patients have been treated using the Apligraf living cell technologies.

VCT Living Cell technology being developed in the lab. REproduced from reference [12]

VCT01 is being billed as the next generation of Apligraf. The VCT01 structure and construction is very similar, but the key difference is that the entire construct is generated with only human cells [12]. Dermal fibroblasts are cultured to secrete natural human extracellular matrix which is then harvested and utilized to form the dermal matrix, which had previously been constructed using bovine collagen.

In addition to the layered cell therapy modeled after the Apligraf family of products, VCT Cell-matrix technology is being examined for applications in surgical repair and regeneration where synthetic materials currently dominate the market [13]. Introducing VCT Cell-Matrix technology would provide a bio-active material for use in these applications which could further promote regeneration by a patients own cells. Ideal targets for for this technology would be for tendon or ligament repair where the VCT technology could equal the mechanical properties of current synthetic technologies but introducing the recruiting and regenerative benefits already discussed that are characteristic of using living cells.

Gintuit is composed of the same components of the Apligraf and VCT01 technologies, but is employed to generate new gum tissue. Alternative therapies for gum regeneration involve grafting existing tissue from the roof of the patients own mouth. This is often painful, limited in the amount of tissue available, and aesthetically displeasing after the treatment is complete. Since the Gintuit cell sheet is constructed of living cells, the produce growth factors and proteins which help recruit and develop cells from surrounding tissues into the newly forming gum tissue, very similar to the Apligraf system. Gintuit just recently received FDA Approval for oral soft tissue regeneration in March 2012. It expects to be able to offer commercial sales domestically in the summer of 2012 and abroad in 2013.