Background and Overview of an Organ-on-a-chip

Human organs are very complex units as each organ has different structures and contains different tissues and different types of cells. Traditional in vitro cell culture cannot yield satisfying results as it fails to correctly reconstitute a fully functional nature of a human body. Animal testings are often considered not accurate as well due to the animal models mostly fail to correctly predict the effects of drugs on humans. Organ-on-a-chip attempts to better fabricate the human organs, to hopefully, resolve the limitations that both 2-dimensional traditional cell culture methods and animal models bring about [1]. Organ-on-a-chip is a small-scaled multichannel 3-dimensional device that can imitate and reconstitute the microstructures and perform the functions of the living organs/tissues of a human body. To better imitate a complex human body environment, physiological conditions are taken into account while operating the devices such as fluid pH, cell culture medium, nutrient concentrations are monitored through pumps and valves in the organ-on-a-chip device. Different from the traditional cell culturing methods that are quiescent, organ-on-a-chips make use of fluid flows, as different fluid velocities, pressures, viscosities can affect on the nutrients/gases/cell concentration gradients, also act as mechanical stimuli to multiple cells present [2]. Creating an organ-on-a-chip is a very complicated task, as the human cellular environment is complex and ensuring cells proliferate and interact outside of its natural niches without contaminations is difficult. 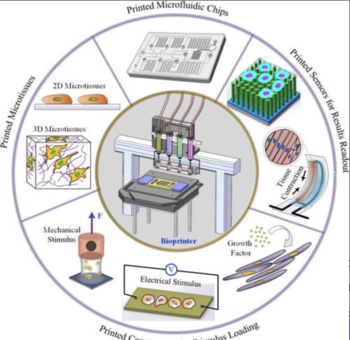 Fabrication of an organ-on-a-chip

Different microfluidic devices that imitate lungs, kidneys, hearts or guts have been broadly researched. The general steps to create a specific organ on a chip are principally the same. The first steps are to design, mold and sterilize the device. Specific types of cells for the organ chips are perfused to the device with culture media through small inlets that are connected to small tubings. Cells are continuously grown inside the chip in a sterile environment. The model is often screened under the microscope for cell population check and once the cells divide enough, the chips will go through chemical tests such as cancer drug testing and drug screening [4].

Fabrication of organ-on-a-chip with bioprinting

Bioprinting has recently been used in the process of fabricating an organ-on-a-chip as multiple biomaterials can be printed in a systematic manner. Hence, printing a microfluidic chip with microchannels, micro-inlets/outlets, microsensors, live human cells, cell culture medium, growth factors, can be done at one single run the process is programmed correctly. However, fabricating an organ-on-a-chip with 3-D bioprinting requires an expensive bioprinter, that this technique is still in its infancy.

Liver on a chip

Lung on a chip

Kidney on a chip 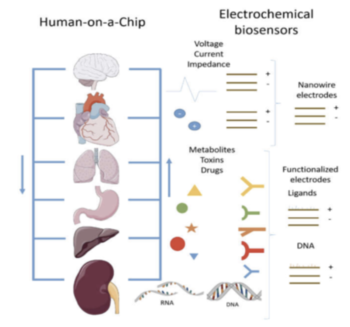 Organ-on-a-chip is said to be promising as it attempts to imitate human organs that the traditional 2-D cell culturing methods and animal models fail to accurately predict. Organ-on-a-chip opens to many possibilities of combining drug testings, cell interaction visualization, microsensing of cell behaviors, that the other two traditional methods cannot achieve. The 3-dimensional shape, microstructures, and flexibility of the chips can mimic the human organ environment better. Organ-on-a-chip can also be combined with other techniques such as confocal microscopy, fluidic system that can optimize microchannels shapes that can enhance the nutrients and oxygen delivery to the cells. Another advantage that microfluidic chips hold is that crucial factors which are parts of the cell nurturing environment can be controlled and changed for testing for different purposes. Simple designs of microfluidics chips for simple simulations are easily made, the materials to make the chips are inexpensive (except human bones and human cells but those can be replaced with mice’s femur bones and cells or other animals’ bones and cells). Further cancer chemotherapy can be tested with microfluidics chips as drugs can also be inserted into the niches along with nutrients inside the culturing medium [3].

Alongside with the promising advantages, microfluidic chips may not reconstitute entire human organs as there are many other biomolecules inside the human body that are not available to insert in the microfluidics chips. The sizes of the microfluidics chips might not be to scale with the human organs and sizing matters because cells might behave differently with different volumes of fluids. Plus, microfluidics alone cannot sufficiently imitate every human organ. For example, heart-on-a-chip or nerves-on-a-chip are required to have some sort of electrochemical environment for precise simulations.