The ophthalmic organ, also known as the eye, is an important sensory organ that allows us to perceive the world we live in. In 2014 the World Health Organization (WHO) estimated that 285 million people worldwide are visually impaired [2]. The most common eye conditions are refractive errors (nearsightedness/farsightedness), cataracts, glaucoma, dry eye, macular degeneration, and diabetic retinopathy. Among these eye conditions, cataract is the leading contributor to vision impairment. The current treatment for most of the conditions is generally surgery to correct the issue. Research has been done over the years to engineer various parts of the eye to correct damages caused by diseases or physical injury.

Refractive errors are the most frequent problems in the U.S. There are a few different types of errors; there is myopia (nearsightedness), hyperopia (farsightedness), astigmatism, and presbyopia. In general, these errors are the result of the cornea changing shape or aging of the lens. This causes light to not properly focus on the retina causing images to be blurred and distorted. Corrections can be done with eyeglasses, contacts, and laser surgery [5].

Cataracts prevalence increases with age and affects nearly 17.2% of Americans age 40 and older [3]. Cataract is a clouding of the lens causing vision to blur. This cloudiness is the result of some of the proteins on the lens clumping together. As more proteins clump, the cloudier the lens becomes. The current treatment for cataracts is surgery to remove the lens and replace it with an artificial lens. [1]

Diabetic Retinopathy: Diabetic retinopathy affects more than 4.1 million Americans between the ages of 20-74 [3]. This disease is a common complication of diabetes and is the result of damage to blood vessels in the retina or the growth of abnormal blood vessels in the retina. Current treatment is with laser surgery where lasers are used to burn the vessels to cause them to shrink [4]. 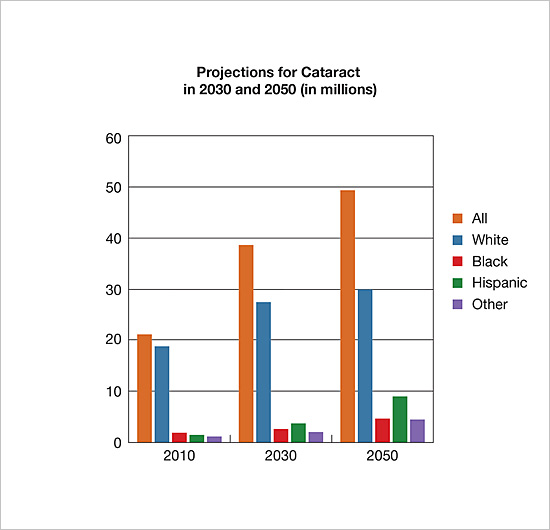 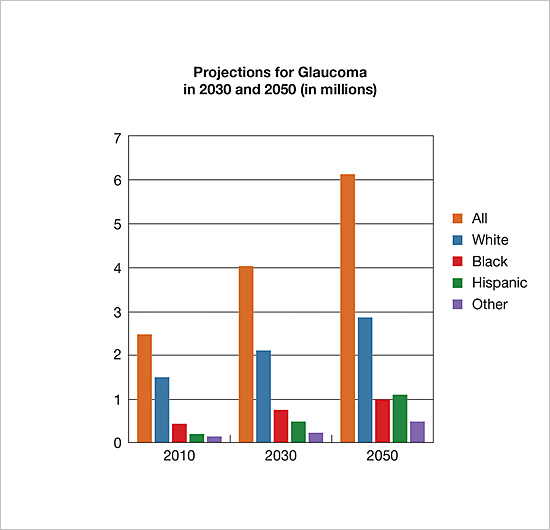 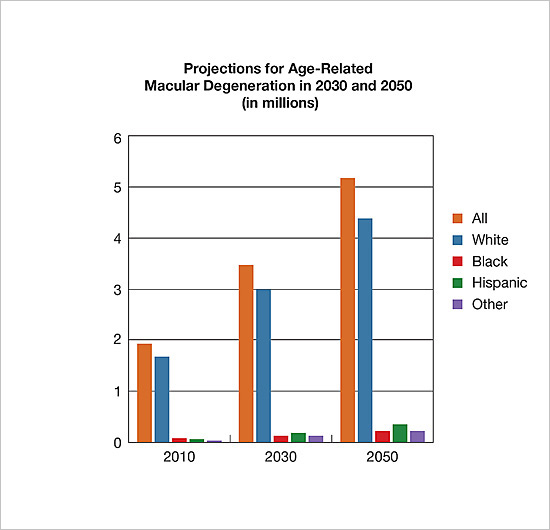 Graphs show the projected number of people affected by a disease. It is clear that in the next 35 years, the number affected by these disease will double.

Lasik is a quick procedure in which the surgeon will cut the surface of the cornea and then, using a laser, reshape the cornea. The procedure is relatively painless and has the patient back to their normal lives with in a couple hours.

The cornea has two main functions. The first function is to act as a protective barrier for the rest of the eye. The cornea also acts as an outer lens that focuses light to the pupil. Damage to the cornea can result in loss of vision. Studies have been conducted to help regenerate the cornea as well as create an artificial cornea.

In a recent study, scientists have found that hydrogel scaffolds are a suitable means of regenerating damaged corneas. These hydrogel scaffolds are made up of networks of recombinant human collagen type III and 2-methacryloyloxyethyl phosphorylcholine (RHCIII–MPC) [10]. The cornea is made up of collagen type I naturally. Collagen type III behaves closely to that of type I collagen, allowing for the RHCIII-MPC scaffold to promote cell regeneration on the cornea. To maximize the efficiency of cellular regeneration on the hydrogel, scientists had to figure out the appropriate concentrations of water and collagen. With the suitable concentrations of water and collagen, scientists were able to create a suitable gel that they could implant. They tested this gel on mini-pigs and found that this gel allowed for regeneration of the cornea [10]. The table below give the concentrations of each component in the hydrogel. 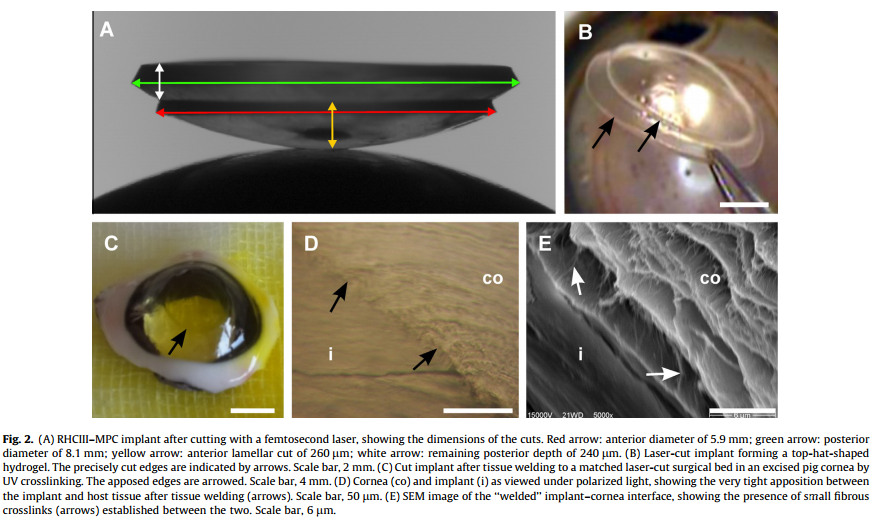 The image above shows the scaffold and it implanted into a cornea.

For those not eligible for a cornea transplant, another option to correct damaged corneas is to use an artificial cornea. The type I Boston keratoprosethsis and the type II Boston keratoprosthesis (BKpro) is an artificial cornea that can be transplanted into patients. The type II BKpro is used in more severe cases of corneal replacement [11]. The BKpro is made out of made of polymethyl methacrylate (PMMA) which is a plastic that allows for excellent tissue tolerance and has excellent optical properties. Vision with the Kpro is similar to sight with a natural cornea.

The retina is what allows the light from the lens to be converted into neural signals which are then interpreted by the brain. Diseases such as glaucoma and macular degeneration can permanently damage the retina. In a recent study, scientists looked to effectively transport retinal ganglion cells (RGC) to the damaged retina. In the study, a biodegradable electrospun scaffold (made of poly –D, L-lactic acid [PLA]) is the mode of transportation of the RGC. RGC were seeded onto the PLA scaffold and transplanted into a rat retina. The cells were monitored and viability was assessed over a period of time. The result was that the RGC had a high survival rate, they maintained appropriate electrophysiological properties, and the PLA scaffold was found to be able to deliver properly aligned cells to the retina. [6]

In part A of the image, RGC were injected without any scaffold and the cells did not properly align in the retina. Part B is RGC with the scaffold and shows that the cells aligned appropriately. Part C shows how tightly the injected cells can align with host cells.

In a recent study, scientists are studying the use of umbilical cord blood serum (UCS) in the treatment of various diseases, more specifically diseases that affect the cornea. UCS has a high concentration of growth factors as well as mesenchymal stem cells and hematopoietic stem cells. The stem cells as well as the high concentration of growth factors can promote the growth of torn cornea cells from disease, surgery, or injury. The UCS is collected from donors and made into eye drops. The study found that this UCS eye drop was able to reverse damage done to the cornea by physical damage or damage done by disease [7]. In nature the cornea contains cells called keratocytes which are a type of fibroblasts. These keratocytes have shown the ability to repair the cornea. Studies have shown that mesenchymal stem cells mimic keratocytes, and therefore have the potential to be used in cornea regeneration [9].

In another study, scientists look at umbilical cord serum as a way of regenerating retinal nerve cells [8]. Human cord blood cells (HCBC) have been found to be able to differentiate into hepatocytes, neural cells, osteoblasts, chondroblasts, adipocytes, and endothelial cells, which make it hopeful that it HCBC can be used into regenerate retinal nerve cells. In the study they used mice and damaged the retina. They injected HCBC into the mice and after 2 weeks examined the mice to see if any retinal neural cells grew. They found that in the mice, the HCBC had differentiated into retinal neural cells [8]. This allows for research into regeneration of retina using umbilical cord blood serum.

When introducing a scaffold to the body there is difficulty ensuring that it will orientate in the correct direction. When retinal ganglion cells are transported to the retina, it is important to be sure that they orient themselves in a way that allows for the cells to function properly [6]. Biocompatibility and stability of the tissues involved is also important. When the recombinant human collagen type III and 2-methacryloyloxyethyl phosphorylcholine (RHCIII–MPC) were put into the eye, the biomaterials had to closely match the composition of the cornea; otherwise it would not have been accepted [10].

With umbilical cord serum treatments there are no observed adverse effects to the eye, but there are some potential dangers of blood borne diseases and infections spreading from the UCS donor to the patient [7].

The use of Human cord blood cells (HCBC) regenerate the retina has been explored. In a study, it was found that these HCBC were able to differentiate into retinal neural cells. This research can lead to the development of engineered retinas using stem cells.

The “bionic eye” is under development by a company in Australia. For the device to work, the patient needs to have a functioning visual pathway form retina to brain. The device uses a camera mounted onto glasses. This camera transmits high-frequency radio signals to a microchip. This microchip is implanted in the eye and has electrodes on it. These electrodes convert the radio signals into electrical impulses. These pulses stimulate the retina cells and they send a signal to the optic nerve. The current aim of the bionic eye is to help those with retinitis pigmentosa and age-related macular degeneration which are diseases that affect photoreceptor cells. Pictured below is a prototype of the bionic eye. 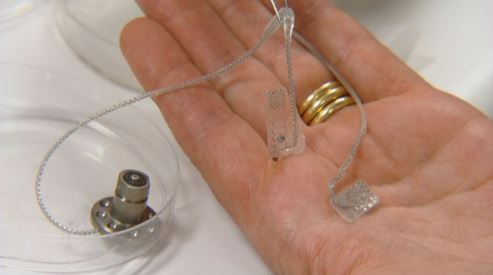