Natural biomaterials are any material taken from plants or animals and used to augment, replace, or repair body tissues and organs. The use of natural biomaterials is not a new concept; naturally derived materials have been used by humans for thousands of years. Some of the earliest records of this are from ancient Egypt, whose people used sutures made from animal sinew, coconut shells for injured skulls, and wooden teeth. In Germany in 1891, the first hip replacement surgery was recorded using ivory. Recently, biomaterials have had a resurgence onto the scientific field as a good alternative to synthetic materials for medical research[2]. The image shows George Washington's set of dentures, made of ivory and animal teeth [1].

Scientists need viable biomaterials to fulfill certain requirements. The most important criteria are that biomaterials must be biodegradable, biocompatible, and able to attach and grow cells. In addition, it is important that the material be non-toxic, mechanically similar to the replaced tissue, and be relatively available and easy to produce. Natural materials are often already designed to meet these requirements, and therefore are good candidates for use in humans [3].

However, there are limitations and disadvantages to natural biomaterials that has led to the simultaneously use of many synthetic polymers. Due to natural variations between the material sources, the biomaterials themselves have a certain level of variability that can lead to difficulty in creating a high degree of reproducibility. In addition, these materials can sometimes lead to immune responses unless the material is extremely well purified [2]. 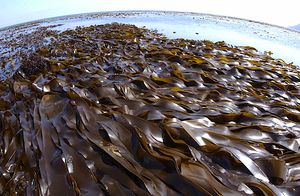 Alginate is extracted from brown seaweed, specifically Laminaria hyperborea, Laminaria digitata, Laminaria japonica, Ascophyllum nodosum, and Macrocystis pyrifera. Luminaria digitata seaweed is shown in the figure. It is a polysaccharide comprised of a set of linear copolymers with blocks made of (1,4)-linked β-D-mannuronate (M) and α-L-guluronate (G) residues (shown in the figure). These blocks can be composed of either consecutive G or M residues, or alternating G and M residues [4].

The ratio of G and M and the length of each block is determined by the specific source from which it is derived. Only the G blocks cross-link, therefore the ratio of G/M and length of the G block are extremely important in its mechanical strength. Recently, scientists have tried creating alginate using bacterial biosynthesis from Azotobacter and Pseudomonas which they believe will allow control over its chemical and physical properties which could lead to more applications and control over its functions[4].

Alginate form a hydrogel that is crosslinked ionically with cations, most often calcium ions. Hydrogels are 3D, crosslinked polymer networks that have a high water content. Alginate is often used in wound healing, drug delivery, and cell transplantation. Wound dressings made of alginate maintain a moist, bacteria-free environment. In addition, alginate hydrogels excel at releasing molecules in a controlled manner, which is especially useful in tissue engineering to deliver cells or signals to the desired area [4]. 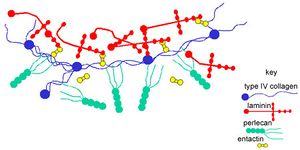 Matrigel is the brand name of the commercial product from Corning Life Sciences and BD Biosciences that is extracted from Engelbreth-Holm-Swarm mouse sarcoma. This material was patented in 1989 and is known as a basement membrane matrix; an interface between cells and connective tissue. The tumor has high amounts of ECM proteins, and the extract yields a product that is approximately 60% laminin, 30% collagen IV, and 8% entactin. The fibrous structures of the laminin and collagen are bridged by entactin to further organize the structure; this structure is shown as color-coded molecules in the figure. In addition, the Matrigel product contains numerous growth factors from the tumor [8]. Matrigel is widely used as a growth-matrix for stem cells because of its high number and variety of growth factors which allow it to cultivate cells that are very sensitive to culture environment. One of Matrigel's most important attributes is its ability to keep stem cells undifferentiated. However, although a large part of Matrigel's success is its similarity to real conditions, this lends itself to high variability. The matrix itself is not well defined, and can vary from source to source, therefore there can be a lack of reproducibility among results [9]. 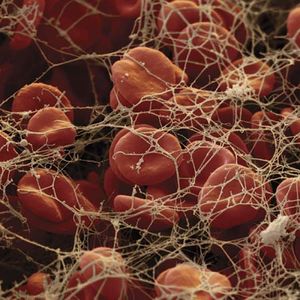 Red blood cells in a mesh of fibrin[10]

Fibrin is a biomaterial derived from the body’s natural response to injury. Fibrinogen, its precursor, is created in the liver and circulates within mammalian blood. When an injury is sustained, thrombin will cut fibrinogen to form fibrinopeptides A and B. This cut exposes the “knobs” of A and B which interact with “holes". This causes the blood to clot, stopping bleeding. Fibrin is stabilized by Factor XIII, which causes cross linking between fibrins [11]. The figure shows reb blood cells encapsulated in a fibrin mesh.

Fibrin was first purified on a large-scale in the 1940s, and has since become one the the classic biomaterials. Fibrin use as a biomaterial is extremely versatile. Its main benefits are that is is very biocompatible, is able to direct tissue regeneration, and polymerizes very quickly. One of Fibrins first uses was as a skin sealant, which dates back to 1909 when Bergel reported using Fibrin powder to stop bleeding. In 1944, it was reported that fibrin was being used to heal burns on soldiers. The first tissue sealant to receive FDA approval, Tisseel, was in 1998, and since then several more sealant brands have gone on the market. Fibrin’s characteristics are valuable for tissue engineering because of its ability to act as a scaffold for tissue repair, and to provide signals for cell growth onto the scaffold. Fibrin can also be taken from the patient's blood, thus preventing a harmful immune response [11]. 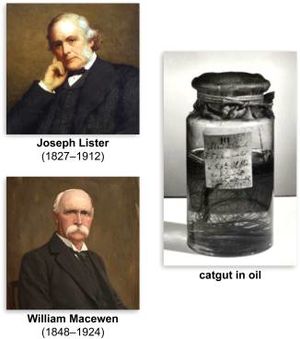 Portraits of Lister and Macewen, pioneers in using collagen for medicinal purposes, and catgut in oil[15]

Even before its use in modern science, Collagen has been used by humans as a component of leather, glue, gelatin, and musical strings. In 1881, Joseph Lister and William Macewen, shown in the figure, independently reported findings on using catgut, a biodegradable suture made from collagen from the small intestine of a sheep. It is composed of three peptides the wind to form a triple helix. These helices can sometimes combine and form large fibers. These collagen networks make up the structure of the ECM and is the most abundant protein in mammals.

Collagen has many properties that make it a good choice for both wound healing and tissue engineering. Collagen is widely used in tissue engineering as it is extremely biocompatible, biodegradable , non-toxic, cell interactive, and has high tensile strength and stability. However, collagen does have some major disadvantages. Collagen must be stabilized, often by adding another material, because its easy interaction with cells can cause the cells to reorganize the collagen and disrupt the scaffold.

Collagen based materials are available from nearly every biomedical company in many forms, including sponges, fibers, powder, and dressings. Collagen can be extracted from animal tissue, but most commonly is taken from bovine skin and tendons, porcine skin or intestine, and rat tail. Collagen is widely used as a scaffold for cell growth or engineering of a wide variety of tissues.

Myocardial tissue engineering is an extremely important area of research currently due to the increase in heart disease cases. Scientists are seeking ways to repair the heart before and after a myocardial infarction occurs, more commonly known as a heart attack, when an artery is blocked completely and stops blood flow. Natural biomaterials have proven to be a promising tool for further advancement. Cardiac repair falls into two main categories: creating a cardiac patches in vitro for the damaged area, or to use an injectable hydrogel. The goal of these treatments is to to use endogenous or exogenous cells to increase heart function, prevent cardiac remodeling, and act as a temporary matrix from cell transplantation. Each of the four natural materials described above have proved to have beneficial applications in this area of study [13].

Applications of alginate was shown to have promising results: there was increased heart function in dogs, pigs, and rats and there were no were no arrhythmias or thrombus formation [14]. In 2009, a porous alginate scaffold was used as a culture for fetal rat cardiomyocytes, vascularized in the rat's peritoneal cavity, and then transplanted into the heart as a patch. The formation of functional tissue was improved by adding adhesion and heparin-binding peptides to the alginate scaffold [13]. 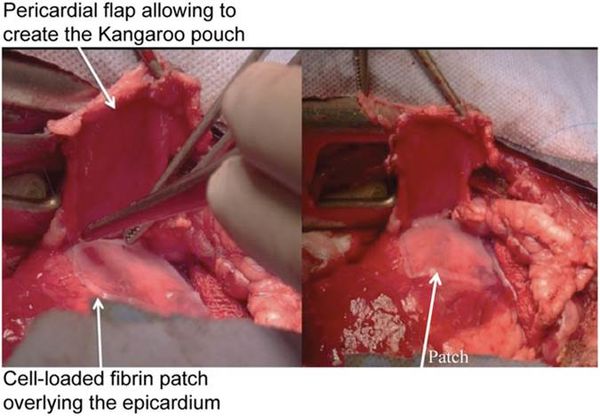 Collagen can help with differentiation into heart cells and and vascularization. Type I collagen without cells was delivered three hours after a myocardial infarction prevented remodeling and long-term loss of function, increased angiogenesis, and reduced cell death. Similar results were also found when a collagen patch was inserted into rats. These results were improved by placing scaffolds combined with growth factors, proteins, and cells. A collagen type I scaffold with MSCs and interleukin-10 was inserted on an infarction and was analyzed 28 days after treatment. The group with the scaffold had a higher ejection fraction, a 40 % increase in wall thickness, and less apoptosis inside the implant compared with the group that received only the scaffold. In 2012, a thermo-gelling mix of chitosan and collagen was created that forms a gel within 30 minutes in rats with properties that help cardiomyocyte survival [14].

Matrigel is often combined with other materials, especially collagen, when used in tissue engineering. Matrigel and collagen, combined with rat cardiomyoblasts, showed improvements in cell survival, cardiac function, and left ventricle wall thickness [14]. An engineered heart tissue (EHT) that has become a standard in research was created in 2002 by mixing cells with Collagen and Matrigel, seeding them into molds, and then using mechanical stretching to test desired tissue. After 6-7 days in culture, the EHT was not damaged by mechanical stretching. Four weeks after the EHT was transplanted onto the infarcted myocardium of rats thick muscle layers had developed [13].

Fibrin has been used successful as both an injectable and a patch. Injection of fibrin has shown improved heart function, increased vascularization, and improved ventricle shape [13]. A fibrin glue consisting of solely fibrin (no cells) was inserted into a rat MI model, which formed a scaffold. This reduced the infarction size and increased microvessel formation. Studies have also shown improved cardiac function after the infarction, higher cell retention,, reduced infarction size, and increased angiogenesis. Experiments in rats and primates with a fibrin patch was applied with human ESC-derived cardiac cells have led to approval of a first-in-human clinical trial. The study is run by Assistance Publique - Hôpitaux de Paris and is called ‘Transplantation of human embryonic stem-cell derived progenitors in severe heart failure’. As of August 2016, it is recruiting participants with heart disease to test fibrin scaffolds combined with cells. The image shows the fibrin patch being inserted over the myocardial infarction and then being covered with the pericardial flap [14].

[14]Perea-Gil, I; Prat-Vidal, C; Bayes-Genis, A. (2015) In vivo experience with natural scaffolds for myocardial infarction: the times they are a-changin’. Stem Cell Research&Therapy. 6. https://www.ncbi.nlm.nih.gov/pmc/articles/PMC4681026/