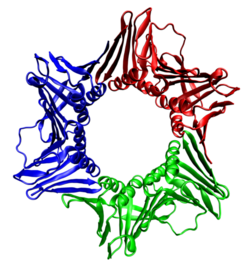 The Molecular and Cellular Biology (MCB) Wikiproject is a group of editors who aim to improve the accuracy and reliability of scientific articles on the free-access encyclopedia Wikipedia. As of late 2007 we have about 150 members and are actively-recruiting people who are passionate about science and can write for a general audience.

Aims of the MCB project

This project aims to better organize information in articles related to biochemistry, molecular, and cell biology on Wikipedia. A major problem facing biology is organizing the vast amount of information that available about genomes, proteomes and cell function. A primary goal of this project is to collect and organize this information and make it accessible to researchers and laypeople alike by providing an entry point to the wealth of biological data that is currently hidden in obscure databases and journal articles.

MCB is developing links with the wider academic community to try to merge the speed and ease of user-contributed annotation with the wealth of curated data in traditional on-line databases. In these efforsts, we are collaborating with the Bateman lab and have imported their Rfam RNA database into Wikipedia, as part of a RNA Wikiproject.

Future plans include the creation of user-editable articles on every human gene, using the ProteinBoxBot, in collaboration with Andrew Su at the The Genomics Institute of the Novartis Research Foundation.