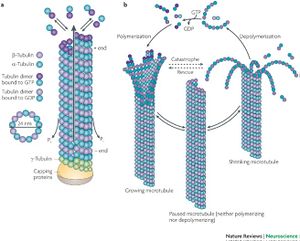 Microtubules, along with actin and intermediate filaments, compose the cytoskeleton of eukaryotic cell. Microtubules are involved in mitosis, cell movement, intracellular transport, and cell structure. Microtubules (MT) are made up of the globular protein, tubulin. The two main forms of tubulin found in MT are α-tubulin and β-tubulin. α-tubulin and β-tubulin spontaneously bind to form a dimer and many tubulin dimers form together into protofilaments. The protofilaments assemble into MT. Microtubules are polar structures with a fast-growing positive end and a slow-growing negative end. The structure and dynamics of MT are shown in Figure 1. At the site of MT attachment to a cellular unit and at the slow-growing negative end are γ-tubulin rings, responsible for the nucleation of MT [1].

1980s – Studies of transport of particles along MT tracks conducted

1990s – Studies of microtubule-associated proteins and paclitaxel effects on MT

Mitosis is the process of nuclear division represented in four stages: prophase, metaphase, anaphase, telophase, followed by cytokinesis. MT, also called spindle fibers, are responsible for establishing cell polarity and pulling the sister chromatids apart into daughter chromosome on opposite sides of the cells. MT attach to the chromosomes at the centrosome and through depolymerazation, pull the daughter chromosome. The centrosome has been traditionally thought as the MT assembly initiation site, however, it is now know MT attach to organelles such as the endoplasmic reticulum (ER).

Through the transition from interphase to mitotic phases, the MT configuration completely restructures as shown in Figure 2. First, the rates of MT disassembly increase leading to a decrease in cell polarity. Second, the rate of MT growth starting from the centosomes increase, reestablishing cell polarity in the direction the MT will eventually pull the daughter chromosome. [1] 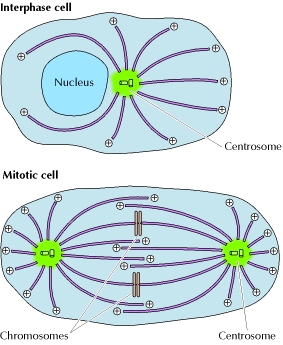 MT are used as a transportation network to transport membrane vesicles through the cell. One example of using MT for transport is in nerve cell axons. The axons can be over a meter long, however, ribosomes are only located in the cell body and dendrites. Using the MT network, proteins, membrane vesicles, and mitochondria are transported from the cell body and dendrites to the axons. MT also transport cellular stress responses throughout the cell. The two main types of motor proteins are dyneins and kinesins. Dyneins consist of light and intermediate chains that are ATP-binding domain that provide the energy necessary to move the protein towards the negative end. Kinesins consist of two heavy chains and two light chains. The head domains of the heavy chains bind to ATP, providing energy for movement along the MT. The other end of the kinesin is used to attach and carry other molecules to the positive end of the MT [3].

Figure 3. Dyneins and Kinesins moving along a microtubule [3]. 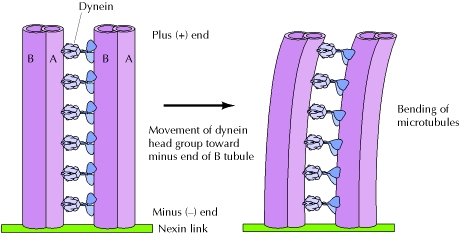 Figure 4. The structure of the MT within an axoneme. At the bottom in green, is the nexin link connecting the microtubules together. Between the microtubules are dyneins with the bases attached to the α-tubules and and the heads attached to β-tubules. As the heads move towards the negative end, the cilia moves to the right [3].

Cilia and Flagella are highly related structure and contribute significantly to cell movement in eukaryotic cells. Many cells in the human body are covered in cilia. For example, the cilia of epithelial cells in the respiratory tract moves fluids and mucus to remove the the fluids and mucus from the passageways. In cilia, the MT are arranged into a structure named an axoneme. Within the axoneme structure, MT are connected with nexin links at the base of the MT. Additionally, MT are attached along lengthwise via dyneins. As the dynein heads move towards or away from the negative end, movement of the cilia is observed shown in Figure 4. The mechanism in which cilia move in synchronized motions so the cell moves efficiently and effectively is currently not well understood [3]. 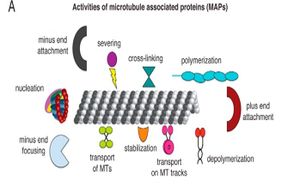 Microtubule-associated proteins bind to MT and effect the function of the MT shown in Figure 5. MAPs commonly affect the stability of MT through increasing the stability and decreasing the dynamic instability. MAPs are currently being targeted in therapeutic uses because up regulating or down regulating different MAPs influence the dynamic stability and mitotic potential of the cell [4]. The connection between upregulation of MAPt, or tau, and Alzheimer's Disease is currently being extensively studied [5]. 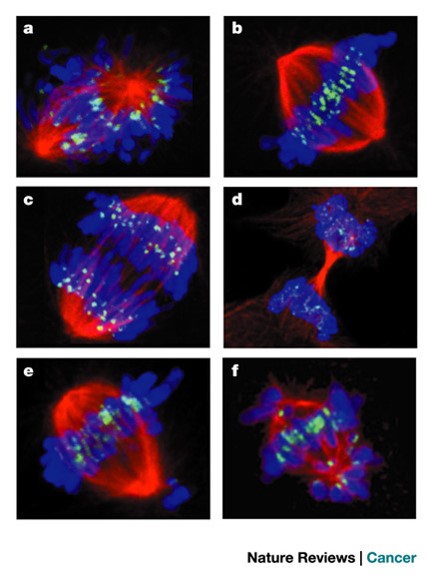 Figure 7. Microtubules shown in red, chromosomes shown in blue, centromeres shown in green. A-D. Immunofluorescent staining of cell undergoing mitosis under normal conditions from A. prometaphase, B. metaphase, C. anaphase, and D. telophase. E. Cell treated with 10 nM paclitaxel. Cell is unable to transition from metaphase to anaphase. Some of the chromosomes remain at the spnidle poles. F. Cell treated with 50 nM vinflunine shown distrupted mitosis. Some chromosomes remain at the spindle poles [7].

Paclitaxel is a commonly used drug in treating cancers including breast, lung, and pancreatic. Paclitaxel acts as a MAP and stabilizes the MT from the inside and decreases the dynamic instability of the MT. Due to the lack of dynamic instability, paclitaxel treated cells are unlikely to successfully complete mitosis. The cell is unable to transition from metaphase with the chromosomes lined up in the center of the cell to anaphase where the MT are pulling the daughter chromosome to opposite sides of the cell. Without mitosis, the cell is unable to divide and the cancerous cells cannot proliferate as quickly. After several unsuccessful attempts of undergoing mitosis, the cell undergoes apoptosis [7]. Figure 7 shows images comparing the stages of mitosis in an untreated cell with a paclitaxel treated cell and a cell treated with another MT targeting molecule, vinflunine. 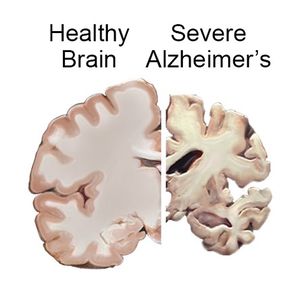 Alzheimer's disease if a form of dementia where the brain progressively loses its memory and thinking abilities. The cause of Alzheimer's is not currently known, however, the cause is thought to be a combination of genetics, health, environmental factors, and life style. In comparing healthy brain tissue to brain tissue from a patient with severe Alzheimer's, there are three significant differences. In the cortex, the area of the brain involved in planning and remembering, the brain tissue is smaller and shriveled. The ventricles are enlarged in the Alzheimer’s brain and are filled with cerebrospinal fluid. The third difference is in the hippocampus, responsible for forming new memories, where the tissue is smaller and shriveled. Current treatments for Alzheimer’s include acetylcholinesterase inhibitors which only work to improve cognitive function but do not affect current damage of the progression of the disease. One hypothesis for the cause of Alzheimer’s disease is a mutation in the MAP tau leading to the aggregation of neurofibrillary tangles. If tau is hyperphosphorylated, tau detaches from the MT and forms aggregates of neurofibrillary tangles[5,9].

A tau active vaccine has been developed by AXON Neuroscience that has passed phase I clinical trials and is currently recruiting participants for phase ll clinical trials. The vaccine includes a tau peptide matching a regulatory domain responsible for oligormerisation. The vaccine creates a humoral immune response and the antibodies can an only differentiate between pathological and physiological tau. The antibodies cannot distinguish between the tau peptide and the hyperphosphorylated tau[9].