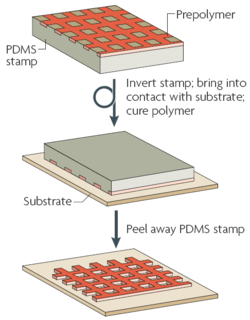 Microtransfer molding (μTM) is a form of soft lithography - a set of pattern transfer techniques that employs a patterned elastomer as a stamp, mask, or mold. The method of microtransfer molding is known for its applications in fabricating three dimensional structures on a microscale level and is popular for its use in the microfabrication of microelectromechanical systems (MEMS) devices. With the ever-increasing desire to miniaturize scientific and technological devices, techniques such as microtransfer molding along with other soft lithography techniques have gained more attention. Consumer products, biomedical instrumentation, and scientific devices are all potential applications of microtransfer molding. Microfluidic devices have become increasingly popular and are one of the most prominent areas of application for soft lithography techniques like microtransfer molding. The ability to produce three dimensional microfluidic systems would allow the creation of many new types of devices and permits to make existing devices more compact. Recent years have shown a growing interest in fabricating microstructures in a number of different applications including polymer-based integrated optical circuits, artificial bones, integrated microfluidic systems, photonic crystals, and catalytic reactors.[1] 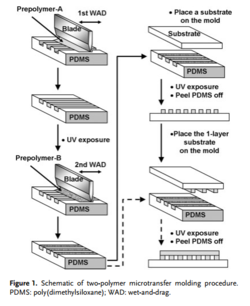 The most commonly used elastic polymer in microtransfer molding is polydimethylsiloxane (PDMS). PDMS generally comes in two components including the prepolymer and the curing agent. The hardening of PDMS is achieved through the cross-linking of its polymer chains via thermal curing. Microtransfer molding can be applied to a broad range of materials. Microstructures of both ceramic precursors and polymers (ZrO2, spin on glass) have successfully been made on a range of substrates including glass, Ag, Au, Si, and Si/SiO2. [2]
The process of microtransfer molding is illustrated in Figure 2. Briefly, in microtransfer molding, a PDMS-based mold called a "stamp" is utilized. The PDMS stamp contains recessed regions, or microchannels, that are manually filled with prepolymer or ceramic precursor. The PDMS stamp, filled with liquid prepolymer, is then inverted, and brought into contact with the substrate. Next, the polymer is cured, and the PDMS stamp is peeled away. This results in polymer microstructures on the substrate with a feature size as small as 1 µm, arranged based on the design of the channels in the PDMS stamp. The same PDMS mold can be utilized multiple times.

In two-polymer microtransfer molding, two different UV-curable prepolymers are used as both a filler and an adhesive (Figure 2). This avoids problems involved with conventional microtransfer molding, where a single prepolymer simultaneously takes on both roles. Next a filling method called "wet-and-drag" (WAD) is then employed - first, one drop of the first prepolymer is placed outside of a patterned section on a PDMS mold. Using a metal blade, the drop is dragged at a constant speed, controlled by mechanical actuators. Dragging the first prepolymer through the patterned area results in the polymer only filing the channels, without any residue. The first prepolymer is then partially cured to solidify it, and then a second prepolymer is then added only onto the first prepolymer by performing the WAD method a second time. Following this, a substrate is placed on the mold, followed by UV exposure. This allows the filled microstructure to adhere to the substrate, so that after peeling away the PDMS mold, the structure remains on the substrate. By using a substrate with a pre-stacked structure, a structure with any number of layers can be created. [2 ]

Electrically modulated microtransfer molding is a newer technique closely related to microtransfer molding. In this process, a constant flow of photocurable polymer is deposited on a high aspect-ratio array of microholes using an injection needle made of capillary microneedle and coated with platinum for conductivity. The array of microholes is kept on a movable platform and by changing the voltage between the tip of the microneedle and the platform, the wettability of the polymer is varied which in turn creates a voltage-dependent filling of the microholes. When this polymer is UV-cured, it produces structures which is now varied in depth depending upon the voltage (Figure 3). The ability to create electrically modulated micropillar arrays over a large area has opened up new frontiers in surface engineering, biotechnology, and microfluidics. [4 ] 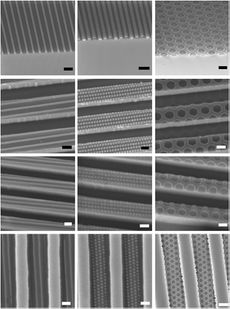 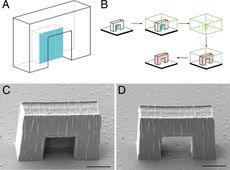 Several significant benefits can be noted regarding the process of microtransfer molding. The entire process is rapid, with the capability of replicating microstructures in five minutes or less. Both isolated and interconnected structures can be generated as well. Using microtransfer molding, structures composed of two materials (for example, polymer doped with dye) can also be produced with a uniform concentration of the dopant over the entire pattern. Other techniques such as MIMIC often produce a concentration gradient in the components because one component may be adsorbed by the PDMS master while prepolymer is filling the channels. Microtransfer molding is also much less sensitive to changes in prepolymer viscosity over time during the process due to how fast the process is. Another advantage of microtransfer molding is that it can be applied to a broad range of materials. Many different structures can be replicated by the microtransfer molding process due to the PDMS mold’s elastic nature. Structures with large overhangs [6] (up to 20 µm) and high aspect ratios [7] (as high as 15:1) can be fabricated. Most significantly, in contrast to other patterning techniques, microtransfer molding can form structures on contoured surfaces in addition to flat surfaces (Figure 4). [5] This trait is necessary for the microfabrication of 3-D structures, as the polymer can be deposited and cured layer by layer into the desired 3-D shape. Microtransfer molding also has low capital and operating costs, and it is cheap to create which results in the ability to rapidly prototype. [3]

Stamp or mold deformation is one of the main challenges that can be encountered during microtransfer molding. For example, the precursors used to create ceramics are generally liquid-based sol or colloidal suspensions, largely consisting of organic and aqueous material that must be removed when the liquid is converted into a solid. During the drying and sintering process, the thin film may diverge from the original shape from shrinking. For similar reasons, closed loop structures cannot be replicated by microtransfer molding in one single step. This is because as the elastomeric resin pours over the loop and is cured, the loop ends up becoming topologically locked in the elastomer, unable to be released (Figure 5). [8 ] Layer by layer fabrication approaches are thus necessary to mold closed loops via microtransfer molding. 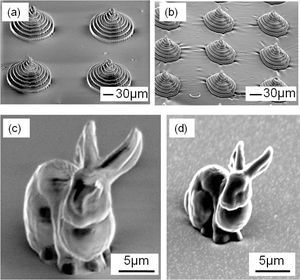 Microtransfer molding holds great promise in the design of microfluidic devices. An example is the development of a chip for capillary electrophoresis separation.[10] The advantage of such system is that they are user directed and inexpensive to make. It is possible for anyone to produce microfluidic devices at a large scale by using this replica molding technique in a very short time.
µTM has been used to deposit polymers to achieve nanostructured patterns.[11] This work demonstrated that µTM can be used to deposit multilayer patterns of G4 aldehyde dendrimers (CHO end group) with a nanometer scale resolution and the patterned structures are stable over long periods of time. These dendrimer nanostructures thus can be used for studying proteins by conjugating the CHO end group to protein’s amine group.
µTM is also being employed along with electrophoretic deposition [12]. µTM is used here to create a PDMS stamp which is then used to pattern an organic soluble ink on indium tin oxide. Gold nanoparticles in colloidal form was then deposited by electrophoretic deposition with an anodic bias between the colloidal solution and indium tin oxide base.
A two-photon microfabrication technique is being used along with µTM to fabricate 3-D carbon microstructures. [9] This was achieved by developing a new type of polymer that is suitable for carbonization via pyrolysis. 3-D PDMS mold was designed using µTM and the polymer was injected into the mold followed by UV curing and carbonization. The 3-D structures produced by this technique yielded in high resolution patterned 3-D structures (Figure 6).