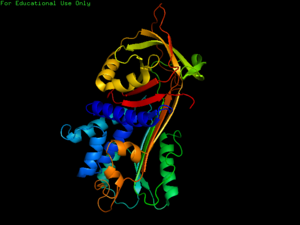 Figure 1: A1AT protein with secondary structure (B sheets and a helices) shown. Made with Pymol. 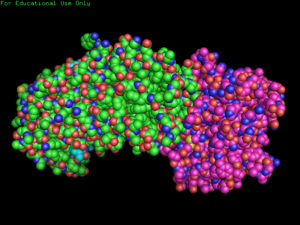 α1-Antitrypsin (A1AT) is a naturally occurring protein in the blood, that is mainly synthesized in the liver, and then diffuses out into the bloodstream. Its' function is to inhibit serine proteases, which is an enzyme that has the ability to degrade other proteins, named due to their catalytic mechanism involving a Ser amino acid residue in the active site. Figure 1 shows an image of its' protein structure, which is characteristic of serine proteases. A protease's main function in the body is to degrade and remove damaged tissues, so that the damaged area is cleared up for repair by other proteins. However, serine proteases aren't able to distinguish by themselves which tissues are damaged, and those that are released in the wrong area end up degrading healthy tissue, which leads to disease. A1AT stops this by inhibiting the proteases which are released in the wrong place. Figure 2 shows A1AT binding to a protease callaed elastase at its' active site, to inhibit its' functions. A1AT is the major inhibitor for a serine protease called neutrophil elastase (NE), which is an enzyme in the lungs which is capable of degrading much of the lungs' connective tissues, through chopping up elastin, which is a major connective component in lung tissue. While A1AT does inhibit other proteases, its' main function is to tightly bind to NE, and prevent it from harmful degradation of respiratory tissue. However, mutations in A1AT protein folding can cause it to lose its' function. Proteins are synthesized as a long 1-dimensional chain of amino acids, which then folds through pathways into a 3-D structure, largely determined by the chemical interactions of amino acid side chains. A protein's function is largely determined from its' sequence and structure, which is why mutations in proteins lead to protein misfolding and disease. There is a genetic disorder which causes an A1AT mutation, leading to the protein to misfold into a larger polymer, and form aggregates in the liver cells that synthesize it. This can lead to liver disease and, as it is aggregating in the liver and not not reaching lung tissues, cause numerous complications in the lungs. This disease is referred to as A1AT deficiency, and currently has no cure. Effects of A1AT deficiency can be mitigated by A1AT infusions, and through treatments of the lung and liver diseases it can lead to, but it is still a common genetic disease. The origins of the A1AT mutation are currently associated with an unstable intermediate in its' protein folding pathway. However, A1AT's protein folding pathways and kinetics are not well-enough understood to pinpoint where and why the mutation occurs, which is why folding experiments for A1AT are important for developing future treatments for A1AT deficiency. 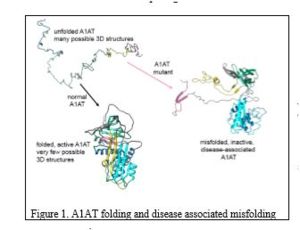 Figure 3: A1AT in preferred folded state, and mutation, which takes up a larger volume and accumulates in the endoplasmic reticulum as a result.

A useful method for studying protein-folding dynamics is single-molecule spectroscopy, using Förster resonance energy transfer (FRET). FRET is a well established phenomena where energy transfer occurs over small distances where energy is transferred from a donor fluorosphere to an acceptor molecule. The efficiency of that energy transfer can then be measured to find the relative distances between the donor and acceptor, or FRET pair. When being used to study protein folding, residues important for folding dynamics, generally on opposite ends of an unfolded proteins, and data is gathered on the folding pathways through measuring the FRET efficiency as the protein folds. Figure 4 shows a diagram of the fluorospheres interacting on the opposite ends of a polypeptide strand below in figure 4. As a protein can have multiple folding pathways with different intermediates, they are measured through single molecules, and then the energy measurements are compiled to determine the proteins' major and minor routes, depending on which is energetically most favorable.

Currently, smFRET experiments take place in equilibrium conditions, which in terms for protein folding, isn't always relevant because the conformation states that need to be studied may not have a high enough population to be detected; such as in this case with intermediate states. Though others have worked on this, there aren't established single-molecule devices that has the necessary capabilities for disturbing equilibrium in these reactions. We can then turn to microfluidic devices, which are small enough to study single-molecule systems, because mixing in these devices can be utilized as a perturbation method for equilibrium. This, plus the amount of control of fluid flow properties and small sample volumes, make microfluidic devices a viable method of studying protein folding through smFRET. 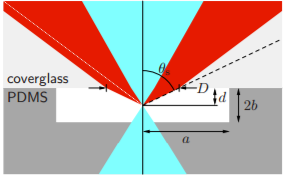 Several factors must be considered with the design of a microfluidic device for this purpose. FRET efficiency measurements require the window for measurement to stay in the frame for about 1 ms. Because of a combination of this, and the general size of protein molecules, the fluid velocity while using smFRET can't be faster than 1 um/ms. Protein folding begins with a hydrophobic collapse, which has the first important conformational changes starting in the first couple milliseconds, and then the rest of the folding process to its' preferred state typically takes place in about a minute or less. The device was designed with the protein being able to be in the pathway for 2 minutes, or 120,000 um with the desired 1 um/ms speed. The device design, which is heavily based off that in the Wunderlich 2013 article shown in figure 6, is designed with the idea of the long observation channel for the initial changes, and then the extended observation for the rest of the structural changes to get to its' folded state. Additionally, the dimensions must be made with the confocal volume of the laser detecting smFRET effeiciency. The laser shines through a pin hole in the middle of the channel depth, as shown in figure 5, and then spreads out to a light cone. With the laser at depth d in the channel, the light cone will have a diameter of D=2Ad/[math]sqrt(ns^2-A^2)[/math], where ns is the index of refraction in the channel, and A=A=ns[math]sin theta[/math]. From calculations and agreed measurements with the literature, dimensions were designed with a width of 100 um and depth of 10 um. Once the silicon mask was made from the design, it was replica molded with PDMS, and plasma bonded to a microslip cover glass, which is what will be held by the device doing smFRET measurements. A completed version is shown below in figure 7. Materials used for initial mixing tests, after water, were green fluorescent protein (GFP), guanadinium chloride denaturant (GdmCl), sodium phosphate buffer, and tween to prevent the protein adhering to the walls. Different mixing tests were run, with starting the protein unfolded in denaturant and then washed with buffer to unfold, and vice versa. Mixing tests involve taking 7M GdmCl with protein, and diluting it down with buffer instantly in the small mixing channel after the two meet, so that the folding process begins as soon as the protein hits the observation channel. 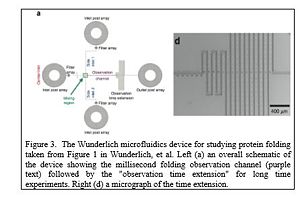 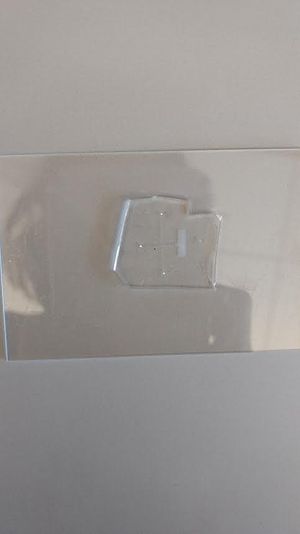 There were expected challenges with the mixing of the very viscous protein and denaturant with the buffer, which confirms the need for a pressure driven flow in this system. This will require setting up some sort of apparatus to attach pressure to the device inlets while it is on the smFRET machinery. Additionally, there were some hands-on issues with the plasma bond sticking, as shown below in figure 8. Future work would be to find the amount of pressure required to dilute the protein in denaturant to our desired concentration, set up the pressure driven flow, and take smFRET measurements with A1AT after this is done. After this class, the device and project will be taken over by a graduate student in the Gershenson lab.This device could be useful to many non-equilibrium folding measurements in the future. 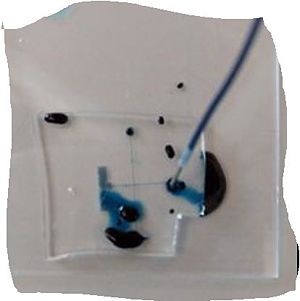