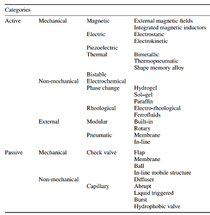 The timeline for microfluidic devices started around the 1970s with a gas sensor system developed at Imperial College by Andreas Mann; however research into the design of microfluidic valves did not start to grow until the late 1990s. This was largely due to the introduction of soft lithographical techniques developed in George Whitesides' lab at Harvard University. Using PDMS (polydimethylsiloxane), soft stamps can be easily fabricated, allowing a large variety of microfluidic devices to be designed and produced quickly.[1]

The research into soft lithography led to the immediate growth in the potential application of microfluidic devices. Due to the increased complexity of these types of devices, researchers noticed the need for microvalves to direct and control flow within the field of microfluidics. Even today, the development of reliable microfluidic devices that can be used in everyday life, such as point-of-care devices, is hindered due to the lack of reliable microvalves, which can be fully integrated into devices.[2]

One method to direct flow of a fluid within a microchannel is to change the energy of the surface, preventing fluid flow in a certain region. This is simple and straightforward procedure to direct fluid in a device, although will not effectively regulate flow through the channel. Using both surface modification by a self-assembled monolayers as well as photolithography, researchers were able to pattern regions to be hydrophilic or hydrophobic. This resulted in polar solvents to be confined to the hydrophilic regions, while non-polar solvents to the hydrophobic regions. This technique allows specific types of fluid to follow a specific pathway through the microfluidic device.[4]

Microvalves using piston-based valves restrict flow of a fluid in a single direction. These are effective valves, which work as a passive check valve within the microfluidic device. To fabricate, a UV-crosslinkable polymer is filled inside the valve channel and cured to form a moveable piston inside the valve. The unreacted monomer solution is removed from the microchannel, while the cured piston is trapped due to geometric restrictions. As shown in the Figure 3, fluid flows from the right direction is allowed to pass unhindered into the channel on the left of the piston; however, fluid flow coming from the left side to the ride will result in a closed valve, preventing backflow into the channel.[5] 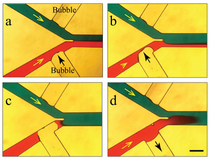 By manipulating the pressure of air within a side channel connected to the main microchannel, fluid flow in the channel can be prevented or decreased depending on the pressure of air used. This air bubble method can also be regulated to induce mixing within a microchannel. For microvalves, the bubble of air is introduced into the flow of fluid, cutting off the flow within the channel. By controlling the expansion of air within the channel, researchers can induce a fully-closed, partially-closed, and fully-closed flow in the device. An advantage of this method is that it can be applied to a variety of fluids and does not introduce dissolvable barriers, which could affect the fluid further downstream. For air-sensitive solutions, inert argon or nitrogen gas can be used in place of air to act as the bubble within the microvalve.[6]

A capillary burst valve works by relying on a geometrical trick during the fabrications process and requires no moving parts. This microvalve functions by fluid flow creating a meniscus due to geometrical restrictions, which prevents the advancement of the fluid front. Following an increase in pressure, the fluid in the valve bursts forward, opening the valve irreversibly. As shown in the Figure 5, the flow stops where the microchannel adopts a wider rectangular geometry, due to surface tension, but is able to flow past following in a change in pressure. For some capillary burst valves, the holding time is increased by changing the hydrophobicity at the entrance of the wider channel, further preventing the flow of fluid.[7]

Micofluidic valves fabricated using a PDMS-based material have several advantages over other valving systems. These systems are soft, moveable, and reliable, which makes the PDMS valve simple to integrate into a flexible device. PDMS is poured into the desirable mold and thermally cross-linked to retain its shape. Following curing, the PDMS stamp can be peeled off the master mold and used a repeatable number of times to produce imprinted over microchannels. When air pressure is increased or decreased over the PDMS stripe, this results in the valve actuating-to-open or actuating-to-close, respectively. This type of pneumatic valve is one of the most common used for microfluidic devices.[8]

An electrostatic vale in a microfluidic device works by combining a moving conductive top electrode with an electric circuit to open and close the valve. In terms of scalability and integration, it’s important that microvalve can be easily integrated into a device system and require a low threshold to actuate properly. Unlike a pneumatic valve, an electrostatic valve has fewer moving parts and can be switched to open and close by simply applying a voltage. This advantage would allow an electrostatic valve to be integrated into a portable device. These types of microvalve systems have been produced for hard microfluidics as well as for soft microfluidics, which make use of a PDMS-based mold.[9]

There are several passive methods of microfluidic valves, which result in time-delayed fluid flow. Several types of microfluidic valves require moving parts in order to control flow, which are difficult to incorporate into paper-based microfluidic systems, as well as not suitable for point-of-care microfluidic devices. For time-delayed valves, the fluid flow is reduced for a period of time, resulting in a slowed delivery of the fluid to a specific location in the microfluidic device. These valves require no moving parts or external systems, making time-delayed valves very user-friendly. On example of this valve, is a tunable-delay shunt. For this, an absorbent pad is placed along the microchannel. That results in a delay of the fluid reaching the end of the channel as compared to the control sample.[10]

Electrowetting refers to the change in wettability of a solution on a surface as a result of an application of low voltage to the system. Recently, researchers have applied the idea of electrowetting to microfluidic valves, which actuate irreversibly as a response to low voltage. The electrowetting valve functions by applying voltage to a hydrophilic and a hydrophilic silver electrode. Initially, the fluid front is stopped at the hydrophobic silver electrode, due to the high contact angle of the fluid against the electrode. The valve is actuated when voltage is applied, which breaks down the hydrophobic layer on the silver electrode, allowing fluid to flow past the electrode.[11]

In conclusion, the development of microvalves is an area of great interest within the research community at the moment, and considered one of the important aspects hindering the integration of microfluidic components for devices that require complex fluid flow.[2] For microfluidic valves, there are several types of valves, which can generally be divided into active and passive valves. Brief introductions for electrowetting valves, electrostative valves, capillary bubble valves, PDMS-based valves, time-delayed valves, and piston-based valves. Additional types of valves are named in Figure 1, which rely on a combination of mechanical, non-mechanical, and external methods to function.[1] The overall goal for the field of mmicrofluidic devices, is to create a microvalve, which is reliable, user-friendly, portable, simple, and easily fabricated and can be used in a variety of microfluidic applications, from drug testing to point-of-care biosensors, to complex biochemical analysis.[3]