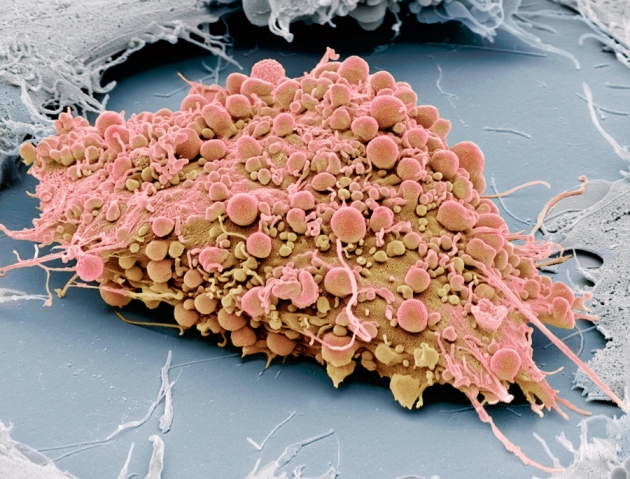 The 1960s & 1970s – Friedenstein and coworkers demonstrate that the osteogenic potential is, as seen in transplantation of BM cells, associated with a subpopulation of bone marrow cells [7]

Mesenchymal stem cells (MSC) are pluripotent and traditionally found in bone marrow tissue and throughout the body, in lower amounts, in many human organs such as adipose tissue, skin, and muscle. These cells originate during embryonic gastrulation from the mesoderm. In more recent studies, the abundance of MSCs are due to its perivascular origins. Distinct nonhematopoietic surface cell markers such as CD29, CD73, CD105, CD90, and CD44 characterize MSCs. [1] 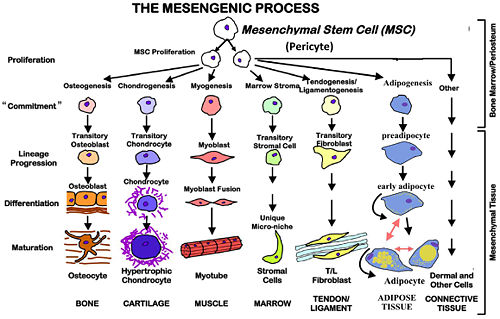 Other properties that distinguish MSCs from other somatic stem cells follow in later sections. Scientists and researchers are interested in MSCs as these cells can terminally differentiate into other mesodermal cell types that lead to the development of blood, many connective tissues, bone, and much more. More importantly, these cells allow for tissue repair and modeling during one’s lifetime. [2]

Unlike embryonic stem cells, mesenchymal stem cells are more tissue specific and are undifferentiated cells found amongst specialized cells in tissues and organs. [3] In addition to its specific biomarkers, MSCs are culture-dish adherent, which isolates it from the rest of the bone marrow. [2] Another trait that distinguishes MSCs from other stem cells is its capability to differentiate into bone, cartilage and fat in vitro. However, for researchers and scientists, the most important characteristics that MSCs have are its trophic, anti-inflammatory and immunomodulatory, anti-apoptotic, and anti-microbial properties of MSCs explained later in this section. [4]

MSCs role in the body is related to their ability to respond to injury by sensing and secrete chemokines that will allow for healing the damaged tissue affected by injury, infection, or disease. [4] In a human body, hMSCs numbers decline with age, which signifies the slower tissue and bone repair and regeneration as one matures. [2] 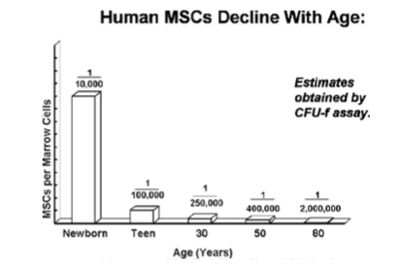 In biology, researchers used the term "trophic" to describe the nutritional properties that a source offers. MSCs primary trophic property is its secretion of growth factors and chemokines to induce cell generation and angiogenesis. They express mitotic proteins such as various growth factor genes to increase fibroblast, epithelial, and endothelial cell division. This property moves beyond cell proliferation to the reduction of scar tissue formation by local cells. [4]

When a person succumbs to musculoskeletal trauma, inflammation usually occurs hindering the natural repair processes by local progenitor and mature cells. MSCs offset this inflammation by preventing the regeneration and functionality of T-cells, B-cells, and of many other cells that are at the site of injury. MSCs provide the balance of T-helper 1 and T-helper 2 cells in these areas, which are beneficial to tissue regeneration process in cartilage, muscle, and other soft tissue injuries. They are also proven to alleviate autoimmune disease symptoms as well as having anti-diabetic effects. [4]

MSCs have the ability to rescue apoptotic cells caused by exposure to oxygen deficiency (hypoxia), chemical damage, mechanical damage, and radiation treatments such as chemotherapy. For example, MSCs have shown damage reversals in cardiomyocytes after ischemia. However, it is still uncertain as of how these cells can reverse apoptosis.[4]

These stem cells have the ability to express specific peptides commonly displayed in epithelial and phagocytic macrophages to fight various bacterial infections. This discovery came from scientist's observations of MSCs secreting these particular peptides in response to E. Coli and other microbes, which contributed to the belief that MSCs may act as therapeutic agents for severe and systemic infections. [4] 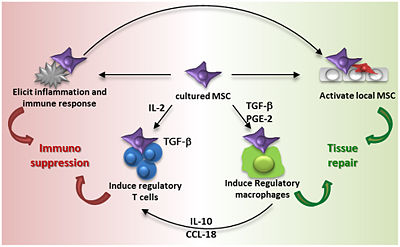 Motivation to use MSCs in Tissue Engineering and Current Work

Scientists and researchers would like to use MSCs as a form of regenerative medicines to allow damaged tissues in the body to be able to heal themselves naturally. They are also using MSCs for allogeneic therapies relating to skin and organ transplants as well as maintenance of cancerous cells because of MSCs immunosuppressive [5] and regenerative properties.

Clinical uses for MSCs and Diseases treated by MSCs Therapy

Studies in this area show, in a 2005 study, using small amounts of bone marrow (BM) for non-union fractures are possible through minimally invasive procedures. Using unconcentrated and autologous bone marrow, out of the 60 patients who volunteered for this trial 53 showed results of bone repair after four months. This experiment led as the precursor to initial adopters of this type of therapy. [4]

In more recent experiments, where the volume of BM was greater than that of the previous study, results showed that BM had numerous advantages over expanded cells and used at the point-of-care, in a single procedure with minimal risk, cost or time expense of waiting for cells from a lab. [4]

Osteonecrosis is a disease caused by reducing blood flow to bones in the joints, causing bone decay. Individuals affected by this illness will need to have surgery at some point in their lives. Since MSCs are known to have anti-apoptotic properties, MSCs therapies appear more attractive as possible treatments in this area. MSCs therapy options for this disease as well as others such as sickle cell and who are at higher risk of complications and failure relating to joint replacement are extremely desirable as it would be a minimally invasive procedure with significant pain reduction. [4]

The central issue for spinal infusion and transplant is the lack of cadavers where spinal parts can be taken from and used in patients during these procedures. Another issue is the potential for the patient to develop pseudoarthrosis. A goal in this area is to be able to grow bone in the place of the diseased or damaged vertebra(e). There is only one peer review study that uses cell therapy in spinal fusion, where 95.1% of patients who received the BM concentrate (BMC) showed spinal fusions. These results support the idea of using BMC as a potential alternative to current methods. [4]

Cartilage injuries pose many challenges regarding treatments, which is why scientists perform extensive studies using stem cell therapy. Experiments in this area consist of using both animal and human models subjected to various conditions such as tendinitis and osteochondral lesions of the knee. Although results show, from MRIs and biopsies, that cell therapy can promote cartilage regeneration, the medical and scientific community argue about the number of cases completed using cell therapies and the efficacy of these treatments. Nonetheless, the evidence derived from these studies do establish MSCs and other stem cells (SCs) as possible agents in cartilage repair. [4]

Arthritis poses many similarities to osteonecrosis as there are no precise and efficient treatments to be able to alleviate the symptoms associated with this progressive degenerative malady. MSC research done in this area is a result of its anti-inflammatory property as well as suppositions around it slowing down and potentially reversing the progression of arthritis. [4]

In various studies, MSCs, derived from adipose tissue, were used to treat patients suffering from severe osteoarthritis (OA). Applied via injection into the patient, patients described the therapy reducing the amount of pain supporting cell therapy as a possible means of intervention. However, researchers did not capture the MSCs dosage quantities of these concentrates given to patients suggesting that further studies need to be conducted to establish a therapeutic dosage range. [4]

There are various platforms to cultivate MSCs cells from the body. Methods usually are unique to host organism as well as the area of extraction. In the case of extracting human MSCs (hMSCs), the extraction process is very much standardized if taking a sample from bone marrow tissue. One can either purchase BM concentrates directly [8] or extract the cells directly from the source [9]. In the case of taking these cells from the patient, one must harvest the cells by inserting a needle into the site and aspirating the fluid [9]. The extraction goes in a centrifuge, which separates the MSCs from the rest of the bone marrow cells. The isolated cells return into the organism by injection. [8][9] 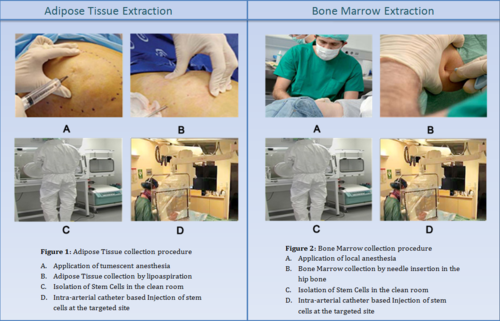 In both of these areas, further research using MSCs for wound healing [12] and reducing the chances of implantation rejection [11]. In common with both fields, solutions for these challenging efforts rely on MSCs immunomodulatory properties. This property will allow for better chances of transplant acceptance, improved rate of wound healing, and a reduction of scar tissue [12]. In the event of an organ transplant, the suppressive immune characteristics of MSCs may aid in reducing the level of toxic suppressants and limit fibrosis reactions relating to the injury, allowing for longer organ transplant survival rates [11]. Also, MSCs therapy is desirable in this case based off of its anti-microbial effects reducing the chances of the actual site of the injury becoming infected [12].

For burn victims, this strategy could prove useful in regenerating the damaged tissues. Burns can provide substantial amounts of damage as well as fostering bacterial infections if the injury promotes large amounts of necrotic tissues. In individual case studies, it has been observed that MSCs therapies prevented the formation of necrotic tissues and tissue regeneration at the burn wound. [4]

Whether it'd be an ischemic event or blood vessel malfunction within the cardiovascular region, MSC treatments may assist with allowing the individual to live a better life due to MSCs trophic and immunomodulatory properties. Future research in this area includes understanding BMCs and MSCs influence over angiogenesis and tissue regeneration related to cardiac ischemia. [4]

The incentive to be able to have successful MSCs therapies for these types of maladies include tissue regeneration of the brain as well as MSCs capabilities to protect neural cells. Future research in this area ranges from driving immune responses to promote better T-helper cell balance, regeneration of damaged neural components, improvement in mechanical and mental functions, tissue remodeling, and reduction of scar tissue after surgery. [4]

For patients diagnosed with Crohn's disease as well as other autoimmune diseases, research using MSC therapy may be useful if MSCs can reduce the amount of activity these diseases have on a given subject. Although studies so far show mixed results of MSCs effects on autoimmune diseases, future research may allow for better understanding MSCs immune response and migrating towards injured sites as well as its impact on a compromised immune system. [4][15]

Potential and apparent limitations given this type of cell therapy:

- Poses manufacturing and quality control challenges due to its heterogeneity [12]

- Various amounts of MSCs available in body due to age [12]

- Risks with allogeneic MSCs are sensitization and allograft rejection [12]