Matrigel Biomaterials by Steven A

The extracellular matrix plays important role in supporting the growth and maintenance of cells, and can modulate the behavior of the cell lines it supports. For example, extracellular matrix conditions play a role in cell differentiation[1,2], cell adhesion[3], or cell signalling[5], and these influences can be the result of proteins[3], growth factors [4], or the physical shape of the matrix[5].

Basement membrane is a very thin membrane which contacts epithelial, endothelial, smooth muscle, and fat tissues[6]. It separates different tissues, and is biologically active in that it facilitates cell adhesion and differentiation, and acts as a storage depot for growth factors. Basement membrane is the first matrix formed in a developing embryo. In normal tissues, there are only small amounts of basement membrane, and it is relatively insoluble, so it was a difficult material to study until the discovery of the Engelbreth-Holm Swarm tumor tissue and the development of Matrigel in 1983[6].

Matrigel is a basement membrane extracellular matrix (ECM). It is currently produced by Corning Life Sciences[7], with a generic basement membrane extract (BME) produced by Cultrex. It consists of a gelatinous mixture of proteins extracted from Engelbreth-Holm Swarm(EHS) mouse sarcoma, a type of mouse tumor cell which excretes large amounts of extracellular matrix[6].

EHS is used because it is rich in ECM proteins such as laminin[8], collagen IV[9], and entactin, as well as heparin sulfate proteoglycan[10] and other growth factors such as transforming growth factor-β (TGF-β), fibroblast growth factor, and tissue plasminogen activator[11] allowing it to mimic basement membrane. It also induces the expression of certain genes such as β4 Thymosin, which is important for cell differentiation during angiogenesis[12]. Mass spectrometry studies of Matrigel indicate that it contained 1851 unique proteins[13].

Matrices which contain only a mixture of purified ECM proteins such collagen and laminin are not always appropriate for cell culture. Certain cell types are sensitive to culturing conditions, and so ECM which excludes growth factors and cytokines will not work well[13]. Furthermore, such membranes may not promote differentiation, or the desired growth characteristics from a cell culture. Matrigel is advantageous because it contains growth factors and specialized matrix proteins, and so it is able to promote differentiation in many cell types, as well as the outgrowth of tissue explants[6].

Matrigel has been used in over 7500 publications[14]. Matrigel allows for the research of more complex cell types and tissues, and is used in studies involving cell differentiation, angiogenesis, and tumor growth. Once the cells have differentiated, they can be placed in animals for organ replacement or repair[6].

Dilute Matrigel, or Matrigel containing reduced growth factors, can be used to maintain undifferentiated human embryonic stem cells(hESC) or induced pluripotent stem cells. In one study it was shown that hESC could be grown for up to 130 population doublings on Matrigel in the presence of media conditioned by mouse embryonic fibroblasts(MEF)[15]. Without the Matrigel, hES have typically needed to be co-cultured with mouse embryonic fibroblast feeder cells to prevent differentiation. This adds complication to the scale-up of hES cultures, as well as the potential for contamination with endoginous mouse viruses[6]. The use of Matrigel greatly simplifies the culture of human embryonic stem cells, and reduces the risk of contamination by eliminating the need to co-culture the hESC with MEF.

Matrigel can have a profound impact on stem cell and primary cell differentiation. Basement membrane is the first extracellular matrix produced by a developing embryo, and is the first membrane a stem cell will contact, and so, it plays important roles in stem cell differentiation. One study indicated that co-injecting Matrigel with hESC’s into mice increased the incidence of teratoma formation by as much as 60%[16]. Endothelial cells cultured on Matrigel undergo angiogenesis, and are induced to differentiate to form blood capillaries[17]. The table below lists the response of a variety of cells to Matrigel.

Tissue explantation is the culture of minced or whole pieces of tissue. It can be a more accurate simulation of the in-vivo environment because cells are in their natural extracellular matrix, and can still interact with neighboring cell types and progenitor cells. Tissue explants grown on Matrigel may undergoe outgrowth or differentiation. For example, Schwann cell explants cultured on Matrigel may undergo myelination[18], and the presence of Matrigel modulated canalization, proliferation, and organization into vascular endothelial cells in rat aortic rings[19]. The table below lists the reaction of a variety of explants to Matrigel.

Figure 1. Tumor cells are cultured on a Matrigel barrier, with a tumor attracting compound below. Tumor cells which penetrate the basement membrane are invasive. [20].

A tumor cell invasion assay was developed by Adriana Albini in 1987[20] and has been used in over 1600 publications[14]. This assay involves culturing cancer cells on top of a layer of Matrigel, with a tumor attractant compound below the Matrigel, and observing how many cells migrate through the Matrigel layer. The theory behind this assay is that the basement membrane is a major barrier to tumor cell metastasis, and that the ability to remodel basement membrane can be used to measure tumor cell malignancy[20,21]. This assay is useful for testing which types of compounds will inhibit or stimulate tumor cell growth and metastasis, to identify compounds to which tumor cells are attracted, to select for more or less invasive cancer cells, or to co-culture cells and determine the influence of certain cells on metastasis[14].

There are many studies indicating that Matrigel can aid in xenograft success and survival. In one study, mice were induced to have a strokes, and hESC xenografts were used to treat the dead brain tissue. Matrigel increased cell survival and neuronal differentiation, and improved sensorimotor test outcomes[22]. A study of dogs subjected to spinal cell injury and treated with neuronal induced mesenchymal stem cells indicated enhanced neuronal regeneration and decreased inflammation when Matrigel is co-injected[32]. Studies in mice indicated that growth factor reduced Matrigel increased the survival and differentiation of embryonic stem cells into neural precursor cells by decreasing the host brain immune response[23].

The co-injection of Matrigel with human tumor cells enhanced tumor initiation and growth in mice[24]. The use of Matrigel in in-vivo studies has been shown to increase tumorigenicity in many cancer cell lines including breast, ovarian, prostate, lung, brain, and retina[11]. An in-vivo study in mice indicates that Matrigel enhanced the growth of melanoma and breast tumor cells, and that the breast cancer cells formed glandular-like structures[25]. Because Matrigel is tumor derived and enhances tumor growth, it is unlikely that Matrigel would be used in clinically in humans. 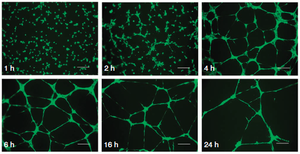 The Matrigel tube formation assay, which is used to test for angiogenic, orvessel forming, activity for vascular endothelial cells. For this assay, cells are plated on Matrigel, and they are observed for tube formation using fluorescence microscopy, Calcein AM staining, etc. This is very useful if one is screening for compounds which promote cell differentiation or vascularization. The angiogenesis assay is determining the influence of compounds on angiogenesis, study genes involved in angiogenesis, and characterizing stem cells or endothelial progenitor cells[26]

At physiological pH, or incubation with 5% CO2, Matrigel is clear, although some will change to a yellow or red color if the pH is allowed to change due to the inclusion of Phenol red in some product formulas. Matrigel forms a gel above 10°C, liquefies between 4°C and 6°C, and polymerizes rapidly between 22°C to 37°C to form a 3D biologically active matrix[7].