Magnetic Resonance Imaging and its Derivatives 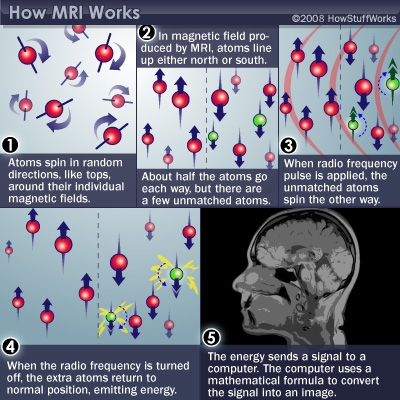 Magnetic resonance imaging technology has been growing field in tissue engineering for its ability to image without harmful radiation exposure. MR imaging technology has been developed to translate on the absorption and emission of electromagnetic energy from hydrogen atoms readily found in water and other molecules within the human body into images[1]. The MR images are created by analyzing the relative proton density of the targeted tissue. This is done by creating a magnetic field, 50,000 times stronger than that of the Earth [5]. The powerful magnetic field is used to align the proton nuclei in the direction of the magnetic field. A separate radio frequency can then be subsequently signaled through the field to change the magnetization of the protons. The radio frequencies cause a rotating magnetic field from the protons, a phenomena that can be measured by the time it takes the protons to realign and how much energy they release during realignment. Raw dated can then be taken from the MR imaging machine and put through algorithms to create high quality images of tissues. Realignment times and energy output of the protons can be used to define different type of tissues and structures. Varying radio frequency pulse rates and patterns allow the field of magnetic resonance imaging to grow into different types of imaging that yield more specified data and results [2]. Figure 1 depicts how a magnetic resonance machine aligns protons to produce data that can create a visual representation of targeted tissues.

Diffusion weight MR imaging is technology that is used heavily in oncology research and cancer drug development. It targets changes in cell density, tissue vascularization, and extracellular space to provide information on tissues. Large in many of these tissue characteristics are a sign of malignant tumor growth. Through the lack of motion and low concentration of water in a tumors can DW-MRI can create images of tumors. A technique, of running a bipolar pulsed gradient through the normal radio frequency pulses, separates DW-MR imaging from normal MR imaging [3]. B-values, a measurement of the intensity and length of the pulsed gradients, allow for tissue differentiation in diffusion weighted imaging. Using high b-values allow high water areas to fade and low water areas to become vivid in resulting MR images. DW-MRIs ability to target tumors have made it a leading imaging technique in drug development [3].

Functional magnetic resonance imaging is a type of imaging that is geared towards the brain. Functional MRIs can map brain function by monitoring blood flow in the different lobes of the brain. An increase in brain function directly results in larger blood flow to that part of the brain, which causes there to be a higher density of hydrogen atoms. The density of blood can then be correlated to brain activity and conveyed into an image. Functional MR imaging is widely used in research to better understand brain function and neurological diseases [5].

MRI and fMRI's Importance in Medicine and Engineering

Tissue engineering has become an advancing field of study as about 20% of people in the United States will need an organ replacement before the age of 65 [6]. Tissue engineering provides a new hope for many patients as organ donors are heavily outweighed by worthy recipients. Development into regenerative tissues and surrogate devices have opened many new opportunities for life but also have many properties that need to be monitored. For regenerative tissues, everything from tissue hydration, growth, porosity, density have to be carefully watched to prove viability and safety [6]. Magnetic resonance imaging technology has been widely used in tissue engineering for its high resolution and minimal invasive properties. Unlike many other imaging techniques, including X-ray and CT scan, MRIs do not subject the patient to harmful radiation, making it a preferred imaging technology [1]. Magnetic resonance technology can image artificial tissues, picking up on the changing properties of their microenvironments to better understand their viability in medicine. Magnetic resonance can image tissues at the microscopic level enabling it to be used to observe critical tissue integration and rejection at the cellular level. As a result, harmful immune rejection or tissue degradation can be observed early on in vivo experiments allowing for better safety during clinical trials. Therefore, magnetic resonance imaging is a necessary step in tissue engineering to validate research, find funding and monitor overall success of implant [6]. 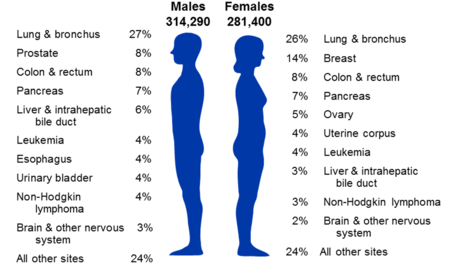 The American Cancer Society estimates that in 2016, there will be about 1.7 million new cancer cases diagnosed and 600,000 cancer deaths in the United States alone as shown in table 1 [7]. Magnetic resonance imaging has one of the highest rates of detection of cancers. In a study done on breast cancer detection, MR imaging had nearly twice the sensitivity to malignant tumors as mammograms [8]. Higher sensitivity leads to detection at earlier stages of cancer ultimately leading to higher survival rates. In a similar study, MR imaging was able to detect about 90% of cancerous tumors in patients with developing breast cancer [8]. Detection is only the first part when treating cancer, magnetic resonance imaging is the leading technology on cancer treatment efficacy. MR imaging can track tumor size to the milliscale allowing for observation of the cancerous tumor's reaction to therapy. Quick detection and high quality imaging of tumor treatments can be extremely useful in drug development as experimental claims can be supported early on in treatment, cutting out the need for extended costly trials [9]. Magnetic resonance imaging can be considered one of the greatest technological advances in the battle to decrease cancer mortality rates.

1948 - A pair of researchers, discovered that blood flow in the brain is regulated by the brain, laying down the foundation for the creation of functional MRI [5].

1975 - Richard Ernst first suggested at and imaging use of magnetic resonance using phase and frequency encoding in comination with the Fourier Transform [1]. 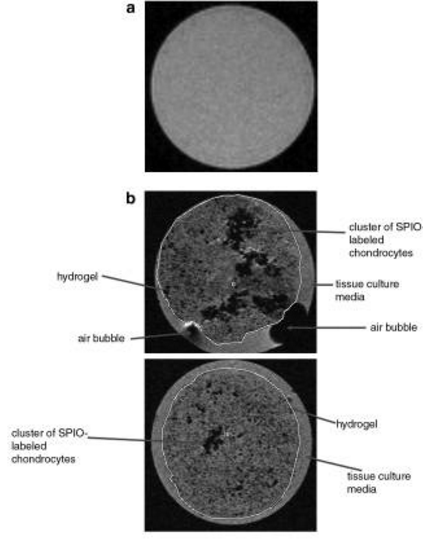 Stem cell based engineering therapies have grown into a prominent field in tissue engineering. MRI technology is needed to observe the progress of the therapies, but does not have the resolution to observe cells without a marker. Magnetic resonance imaging in combination with superparamagnetic iron oxide nanoparticles (SPIONS) can be used to observe tissue engineering implants at the cellular level [10]. SPIONS are a contrasting agent that can be observed by magnetic resonance imaging because of its dipolar moment. The SPIONS are able to create perturbations in the magnetic field of the MRI machine that allow cells to be easily seen in MR images [10].

Repair and replacement of cartilage is a pressing issue in tissue engineering and Ramaswamy et al conducted an experiment SPION labeling chondrocytes in tissue engineered cartilage to test viability. Chondrocytes were removed from the patellar of newborn calves for the experiment. The cells were then labeled using Feridex IV and seeded into a hydrogel scaffold. Function of the chondrocytes saw minimal hinderance from the SPOIN and a neocartilage developed over 35 days. Figure 2 shows the comparison of unlabeled and labeled chondrocytes in the hydrogel after 30 days. By labeling the cells with superparamagnetic iron oxide nanoparticles, the tissue's structure and cellular health can be observed using MR imaging [11].

Early detection of malignant tumors decreases mortality rates in cancer patients exponentially. The American Cancer Society has cited a 94% 5-year survival rate in ovarian stage 1A cancer patients. The survival rate drops to 17% when the cancer is found in stage 4. Comparatively, breast cancer 5-year survival rates drop from 100% in stage 1 to 22% in stage 4 [7]. With the growing number of cancer cases, magnetic resonance imaging have been a growing tool for malignant tumor location due to its high resolution. MR imaging has been used in preoperative scanning with great success over many other imaging technologies. MRIs can be credited with finding additional malignant breast tumors preoperatively in as many as 33% of cases when compared to mammograms. MRIs have also gone on to find undetected cancers in the opposite breast in 5% of cases [8]. 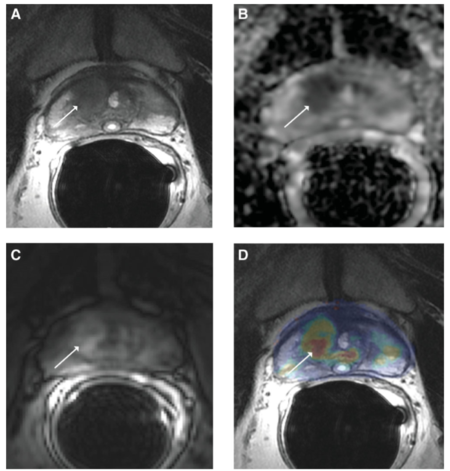 Prostate cancer detection has had huge advancements when coupled with magnetic resonance technology. The American Cancer Society has found that nearly 20% of men will be diagnosed with prostate cancer in their lifetime and early detection is paramount to decrease mortality rates. MR techniques of diffusion weighted and dynamic contrast-enhancement have been integrated into clinical use for their high contrast [8]. Figure 4 shows the effectiveness of MR imaging in locating malignant tumors in the prostate. Figure 4D shows a colored contrast of a prostate tumor in a 57 year old man using a volume transfer constant (Ktrans). The volume transfer constant shows how much volume is being transferred from the blood stream to the tissue [13]. Figures 4A-D show progress in which magnetic resonance imaging is making to better locate and image malignant tumors.

Drug development includes rigorous clinical trials and proven efficacy to be accepted as a treatment. Magnetic resonance imaging, specifically DW and DCE techniques, are essential in seeing tumor response to treatment. As a result of its high resolution, Diffusion-weighted MR imaging is an effective way of seeing if there is tumor shrinkage early on in clinical treatments. DW-MRI is especially effective in looking at treatments that disrupt blood supply to a tumor or induce cell death as both significantly change the proton density of tumors [9]. Padhani et al notes in Consensus on DW-MRI in Cancer, that DW-MR imaging has been proven to successfully show treatment effects of tumors in breast, liver, and brain cancer [9]. 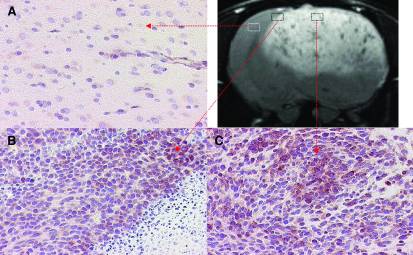 Many focuses of tissue engineering revolve around the basis on cell angiogenesis. Tissue engineered skin grafts are just one example where the success of the tissue is directly correlated to angiogenesis. Towner et al developed a novel idea of assessing cell angiogenesis by monitoring vascular endothelial growth factors (VEGF) with magentic resonance imaging. Magnetite nanoparticles were covalently bound to VEGF probes as a tracer for MR imaging. These probes are a microdevice that have similar characteristics to antibodies, attaching to VEGF but not affecting it. A culture of tumorous cells were placed into the brain of a rat for testing. The hypothesis was that a tumor would have higher levels of VEGF, attracting a large amount of tagged VEGF probes. Tumor growth in the brain tumor was able to be detected by MR imaging in combination with the nanoparticle tagged VEGF probes. Figure 5 shows the MR images of the tumor treated with the tagged VEGF probes. The experiment proved that angiogenesis can be tracked using magnetic resonance imaging in combination with VEGF probes. The rat tested experiment devevloped a new way of monitoring tumor growth as well as other engineered tissues reliant on cell angiogenesis [14].

Tissue engineering is a constantly evolving field with a growing need of imaging technology in clinical use. Magnetic resonance imaging has been a desired option because its both radiation free and non-invasive [1]. Prices do make MRI technology out of reach to many small developers. Magnetic resonance machines can run from $200,000 up to $3,000,000 and access to one can cost up to $3,000 per scan without insurance [15, 16]. Running MR tests on patients with risk of cancer is not feasible at the rate it needs to be done. Labs studying developing fields of tissue engineering will not have the funding for magnetic resonance technology. Even with funding, there is no universal way of measuring MR data and images to make direct comparisons between experiments [6]. Improvements need to be made to make magnetic resonance imaging more accessible with more quantifiable data.

Most of future development within magnetic resonance does not involve improving its technology but with its convenience. Portable machines would help with pre-clinical work, removing the need to transportation of incubating and developing cell cultures [6]. Cheaper manufacturing and shorter imaging times could improve early stage tumor detection. Magnetic resonance imaging is a technology invaluable to both the engineering and medical community, but a unfeasible option for many of its best applications.