Liquid metal enabled microfluidics is up-and-coming research to use liquid metals such as alloys of Gallium (that are liquid at room temperature) in microfluidic set ups. The advantages of using such Gallium based alloys are 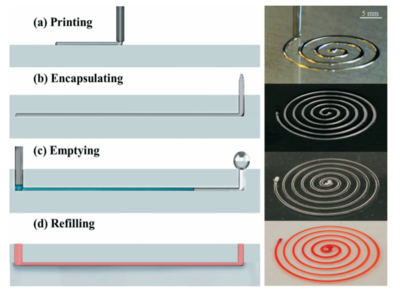 Liquid metals have recently been in creating microchannels and microfluidic devices. The process involves using an eutectic alloy called EGaIn (Gallium-Indium). EGaIn has a low melting point of 15.5°C, however, the formation of a passive oxidation layer stabilizes the solid metal. The process has the following steps:

The channel can then be used for its intended purpose.2 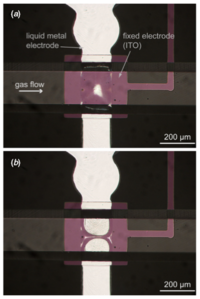 Valves are important in microfluidics because a system may contain one or more fluids that need to be released in predetermined quantities and in predetermined intervals. Liquid metals make excellent valves because they are easy to control and are immiscible with the fluids used in microfluidic devices. In the work by Pekas, a liquid metal alloy electrode (Gallium alloy) is used as a deformable electrode and an ITO electrode is used as a fixed electrode.3 Applying currents of greater than 100V across the electrodes causes them to apply electrostatic pressure on a deformable PDMS membrane to shut off access to subsequent channels, hence functioning as a valve. 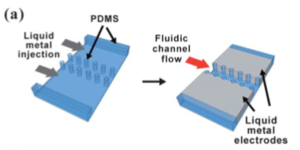 As seen in the 'Valves' section, liquid metals can also function as electrodes. Since they are fluid, the electrode shape and size can be tailored to suit individual needs. The oxide layer that forms on the surface of gallium alloys helps stabilize its surface, and hence we can have liquid metal electrodes that are directly in contact with the surface of the fluids themselves. To inject the metal, the applied pressure on the fluid should be greater than the critical pressure required to rupture the oxide layer. Since the oxide layer is thin (~ 2[math]\mu[/math]m), it has been theorized that it will not significantly affect the conductivity of the electrode. As soon as the fluid stops flowing, the oxide layer rapidly takes over the surface and stabilizes the fluid. The fluid can sustain both AC and DC currents in both aqueous and non-aqueous solutions. Authors have created a series of microfluidic PDMS posts to act as guide posts for the liquid metal.4

Liquid metals have a high electric and thermal conductivity. Hence, passing an electric current through them can make them function as Joule heaters. Solid wires are connected to microchannels of liquid metals and electric current is passed through them. However at higher temperatures (~ 100°C), there is the formation of voids in the microchannels that breaks the circuit and increases the resistance of the system. The formation of voids is attributed to the fact that the thermal expansion coefficient of PDMS is roughly an order of magnitude higher than those of the liquid metal alloys. However, this setback is overcome by using hollow wires instead of solid wires, and continuously pumping extra metal alloys into the voids. Also, the use of a silicon substrate can overcome the issue of void formation. 5,6