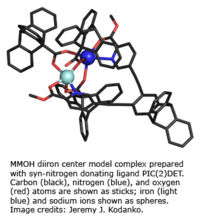 Polymetallic centers occur in numerous metalloproteins where they carry out a variety of functions including hydroxylation of methane, the generation of amino acid radicals, hydrolysis of phosphate esters, and dioxygen transport. How do two or more metal atoms in close proximity in these proteins work in concert to carry out their biological function? How do we know the coordination environment of such polymetallic species in biological molecules? To help answer these questions, we synthesize and characterize well-defined model compounds and compare their properties with those of their biological counterparts. Physical and biological studies of the proteins are also undertaken. Recently our attention has focused on systems in which one or more carboxylate groups link two metal ions. Proteins in this category include hemerythrin, the dioxygen transport protein of marine invertebrates, methane monooxygenase, an amazing biomolecular machine that converts methane and dioxygen selectively to methanol and water, and the related systems toluene/o-xylene and phenol monooxygenase. We use chemical, EPR, Raman and optical spectroscopic, redox, EXAFS, X-ray crystallographic, NMR, Mössbauer and magnetic, and freeze-quench and stopped flow kinetics techniques to determine the effects of one or more metals on the properties of an adjacent metal in both the model compounds and proteins. Under investigation is the dioxygen reactivity of reduced forms of dinuclear iron complexes and proteins by time-resolved UV/visible, EPR, Mössbauer, and resonance Raman laser spectroscopy. Intermediates are also being probed by low temperature X-ray crystallography. Details of reaction intermediates and transition states are also studies by density functional theoretical studies in collaboration with the Friesner laboratory at Columbia University. 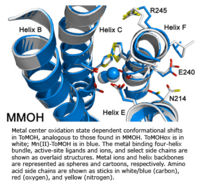 Both physical and mechanistic studies of soluble methane monooxygenase, toluene/o-xylene monooxygenase, and phenol hydroxylase are currently in progress to characterize the active site geometries and the catalytic mechanism of the hydroxylase components (MMOH, ToMOH, PHH) of these fascinating enzymes. Genetic studies of the native sMMO operon and of the ToMO and PH proteins expressed in E. coli, mechanistic investigations of the MMOH, ToMOH, and PHH catalytic reaction cycles, spectroscopic and X-ray crystallographic analyses of key intermediates in the reactions, and details of the hydrocarbon activation chemistry are in progress. Also being investigated are the structures and functions of the reductases, coupling, and other proteins in the sMMO, ToMO, and PH systems alone and in complexes with the other components. Solution NMR spectroscopy has been used to determine the structures of MMOB, the coupling protein, and the ferredoxin and flavin components of MMOR. The electron transfer reactions of MMOR are also being studied. Recently, expression in the native organism of a fourth protein in the sMMO operon has been demonstrated. The properties and function of this protein, MMOD, are under investigation. Additional proteins in the system have also been identified and are being characterized. Recent X-ray crystal structure determinations of ToMOH and PHH have revealed important features about substrate access to their catalytic diiron centers that guide site-directed mutagenesis work to probe features of their O2 activation and hydrocarbon oxidation chemistry. 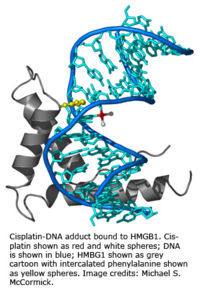 Another major area of research centers around cis-diamminedichloro-platinum(II), cis-DDP or cisplatin, an anticancer drug currently in widespread clinical use. We are studying the mechanism of action of cis-DDP in order to be able to design more effective heavy metal antitumor agents. NMR and X-ray studies of cis-DDP and related platinum analogs bound to synthetic double stranded oligonucleotides are in progress to reveal the three dimensional structure. Included are extensive multinuclear 1-D and 2-D NMR spectroscopic and X-ray crystallographic work on site-specifically platinated duplex DNAs. We now have the ability to create site-specifically platinated DNAs in nucleosomes that serve as templates for investigating nucleotide excision repair, transcription, and transcription-coupled repair. These constructs have also been attached to solid supports to allow for additional studies. Structural work includes hydroxyl radical footprinting to reveal the positioning of the damage on the nucleosome core particle.

We are also investigating the structures of complexes between platinated DNA and proteins in the cell that process the damage, especially 1,2-d(GpG) and 1,3-d(GpNpG) cross-links. Included are HMG-domain and TATA-binding proteins. Platinum complexes with tethered ligands to improve their biological activity are being prepared and characterized in conjunction with the NMR investigations. New reagents to probe the nature of platinum binding to DNA, both free and in nucleosomes, and to study specific interactions of cellular proteins with the corresponding complexes, are being designed and synthesized. Included are a series of compounds containing tethered, photo-activated cross-linking groups. The latter can be used to identify cellular proteins that process platinum-DNA adducts in cells. Automated robotic methods have been used to prepare thousands of new platinum complexes by parallel synthesis for evaluation as next generation platinum drugs. Cell-based fluorescent methodologies for screening the libraries of new compounds have been devised.

Cisplatin-DNA adducts inhibit the processive nature of RNA polymerase, leading to phosphorylation and ubiquitination of the large subunit of the enzyme. This activity has been investigated, and links between transcription and repair in mammalian cells have been established. Work in progress includes studies both with cell extracts and with purified protein components. Thus a broad range of chemical and biological techniques is employed and focused on studies of the mechanism of action of cis-DDP so that more effective anticancer drugs can be designed and evaluated.

A new aspect of our cisplatin research focuses on devising means to achieve the selective uptake of platinum anticancer drug candidates of the cis-DDP family into cancer cells. In this “Trojan Horse” strategy, we tether cell-localizing units to Pt(IV) compounds that release cisplatin upon reduction to Pt(II) inside the cell. 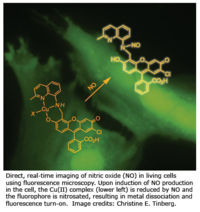 Several projects have been launched in a new area that we term metalloneurochemistry. Novel sensors for zinc have been prepared that append metal-chelating units to fluorescein or to a fluorescein/rhodamine framework that designated as rhodafluors. Zinc has been imaged in the CA3 cells of the hippocampus in rat brain slices. Sensors programmed to visualize extracellular zinc or zinc in damaged neuronal cells have revealed selectively damaged neurons in the brains of animals that suffered blunt head trauma or drug-induced seizures. These same probes have identified new zinc-rich cells in brain. Work in progress includes several strategies to synthesize ratiometric zinc sensors, which shift their wavelength upon zinc binding, and to link the sensors to specific intra- and extracellular protein targets. The ultimate goal is to understand zinc release in brain and to use it to investigate neural networks.

Related sensors are under construction for detection of biological nitric oxide. The focus is currently on the synthesis and characterization of transition metal complexes containing a fluorescent ligand that is released upon addition of NO and signals the presence of this neurotransmitter by light emission. Experiments are also being conducted with live brain slices to use zinc release to track neural network formation and communication. This work has led to the first molecules that detect NO in living cells by fluorescence, rather than one of its derivative reactive nitrogen species.