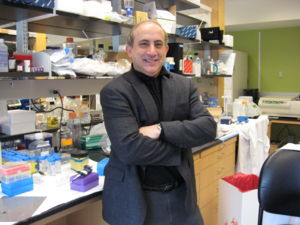 Dr. Licht is currently Professor of Medicine and Chief, Division of Hematology/Oncology. He received his MD from Columbia University and trained in Medical Oncology at the Dana-Farber Cancer Institute. From 1991-2006 he served on the faculty at the Mount Sinai School of Medicine in the Departments of Medicine and Molecular Biology, where he rose to the rank of Professor and Chief of Hematology/Oncology and Associate Dean for Cancer Programs. Dr. Licht's laboratory studies aberrant transcriptional repression as a cause of hematologic malignancy, including acute promyelocytic leukemia and large cell lymphoma, and is utilizing small molecules and peptide interference strategies to reverse this repression. His active funding includes two NCI grants (1) RO1 (CA059998): Sprouty, A WT1 Target for Growth and Development, (1994-2010), and (2) RO1 (CA059936): The PLZF Gene of t(11;17)-APL (1993-2008); an NHLBI grant, RO1 (HL0829950): The Molecular Pathology of Myeloproliferative Disease (2005-2009); a Multiple Myeloma Research Foundation grant: The MMSET Protein of t(4;14)-Myeloma (2005-2007), and a Burroughs Wellcome Foundation Clinical Scientist Award in Translational Research: Targeting Aberrant Transcription Repression in Leukemia (2002-2007). Dr. Licht was also a recipient of a Leukemia Society Scholar Award and holds subawards on two additional RO1 grants. He was a founding member of the NIH Cancer Molecular Pathology Study Section and is on the editorial boards of The Journal of Clinical Investigation, Cancer Research, Nucleic Acids Research and Leukemia. In 2006 Dr. Licht was the Chair of the Educational Committee of the American Association for Cancer Research Annual Meeting. Dr. Licht was elected to the American Society for Clinical Investigation in 2001 and to the Association of American Physicians in 2005. Dr. Licht is the Associate Scientific Director of the Samuel Waxman Cancer Research Foundation, which is becoming an increasingly important funding agency for translational cancer research. He has developed the RFA for this organization and chairs the study section that reviews applications to the organization.

Dr. Licht assumed the position of Associate Director for Clinical Sciences Research in March, 2006 when he was recruited to the position of Chief, Division of Hematology/Oncology, succeeding Dr. Leo Gordon. Dr. Licht was recruited in collaboration with the Cancer Center, the Department of Medicine and Northwestern Memorial Hospital and was assigned one additional floor of space in the new Robert H. Lurie Medical Research Center Building and a multimillion dollar package to further develop basic and translational research. Since his arrival, Dr. Licht has rapidly become integrated into the leadership and activities of the Cancer Center. In addition to working with the research programs and working groups, he has taken a very active role in the oversight of the Clinical Research Office functions.

Back to Jonathan Licht's Lab