Back to Brown Lab

The discovery of microRNAs (miRNAs), has revealed a gap in our knowledge of how cells work: an entirely new form of posttranscriptional regulation exists that appears to play roles in response to stimuli, differentiation, and tumorigenesis. A hallmark of miRNA-mediated protein down-regulation is a continued presence of the target mRNA. In order to understand the mechanism by which miRNAs mediate this translational repression we need to know whether the silenced mRNAs are still associated with polysomes. If the mRNAs are no longer associated with polysomes, where are they sequestered until their transient repression is relieved? Alternatively, if they remain associated with ribosomes, do proteins involved in this poorly understood repression of translation associate with the stalled ribosomes? Multiple groups have attempted to distinguish endogenous miRNA-repressed from actively translating mRNAs by sucrose sedimentation but have concluded that the repressed mRNAs co-migrate with polysomes. I hope to differentiate between these two sets of mRNAs by more careful analysis of mRNAs within polysome profiles. If an miRNA-dependent change in polysome position is observed, I intend to identify other mRNAs subject to such repression, and identify proteins in complex with the target mRNAs. Finally, to better understand whether target mRNAs are permitted to undergo translation, we hope to compare newly nascent polypeptide chains in the absence or presence of particular miRNAs by incubatin cells with a puromycin derivative that can be specifically purified from cell lysates. In this manner, I hope to better define the mechanism by which repression is conferred, and uncover new mRNA targets in the process. 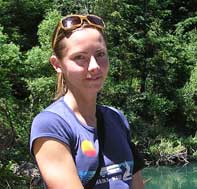