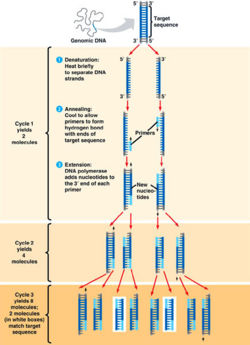 The diagram at left (from fig.cox.miami.edu) is an overview of how PCR works. First of all, what you are doing is making a mixture of DNAs, proteins, and chemicals and then putting it through a program of temperature changes. Inside the mixture is a template double-stranded DNA, which usually is a small amount of plasmid DNA or genomic DNA, two oligonucleotides, which are short (~20bp) single stranded DNAs, a thermostable DNA polymerase, and the monomer units that make up DNA, referred to as dNTPs. 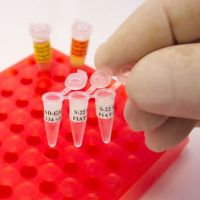 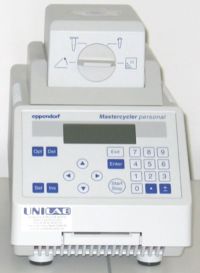 You make up this sample in little tubes (at right, from www.ga-international.com), and run the temperature program in an instrument called a thermocycler (at right, from www.uni-saarland.de). All this device does is heat and cool your sample, but it does so very precisely according to a program that you write into the instrument. Typically this program runs for around 2hrs. At the end of it, you will hopefully have a tube full of linear double stranded DNA corresponding to the region of the template flanked by the two oligonucleotide sequences.

What's happening during this reaction is iterations of denaturation, annealing, and extension. During denaturation, the sample is heated to 94 degrees which results in the separation of all double stranded DNAs into single strands. When the temperature drops to 55 degrees, the DNA will want to go back to being double stranded. Because the oligonucleotides are in much higher concentrations than the template, the oligonucleotides will anneal to homologous sequences within the template. The resulting species is described in (2) of the diagram. The result is a recessed 3' end of a DNA duplex. Such a species is the substrate for DNA polymerase. Upon raising the temperature to 72 degrees, the optimal temperature for polymerization, dNTPs are added to the 3' recessed end of the duplex, and the rest of the stand is polymerized. The resulting double stranded DNA can then serve as template for another round of denaturation, annealing, and extension. Since the template concentration has now doubled relative to the previous step, twice as many stands get synthesized in this second cycle of PCR. Therefore, every cycle of PCR results in a doubling of the amount of product present in the reaction. This is what is meant by the term "exponential amplification".

For the purposes of cloning, there are two tricks about PCR we take advantage of frequently. First the oligos don't have to exactly match the template. They have to be pretty darn close, but a few mutations here and there won't screw it up. However, whatever sequence is present in the oligos ends up in the final pcr product. The result of this is that you can change the sequence of the DNA at the ends of a pcr product by careful design of your oligos. This process is generally called "site-directed mutagenesis," and we'll be using it later in the tutorial. The other important trick is that you can "pin" additional sequences to the 5' ends of your oligos without screwing up the PCR. Those sequences similarly will end up on the ends of your pcr product. Frequently, we'll pin the recognition sequences for restriction enzymes to the 5' end of oligos so that we can cut the DNA and then ligate it into a cloning vector.