Intermediate filaments (IF) are a superfamily of fibers of diameter ~10nm that are found predominantly in eukaryotic cells of multicellular organisms [1]. IFs are one of three major components that make up the cytoskeleton of the cell. They have a diameter between those of thinner actin microfilaments and thicker microtubules, which are the other major components of the cytoskeleton [2]. IFs differ from actin and microtubules in that they are made up of numerous different subunits that copolymerize to form a variety of IFs with different properties and functions [1]. 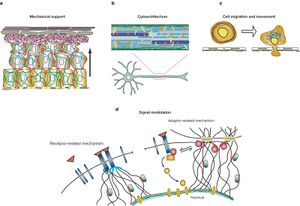 General functions for various IFs found throughout the body [3]

There is a wide range of IFs with different chemical and physical properties that allow them to take on specialized functions in different types of cells or different regions of the cells. The most prevalent and obvious function of IFs is mechanical support. Unlike plants and fungi that have a rigid cell walls, animal cells must rely on the cytoskeleton to support the cell and the surrounding tissues [2]. IFs are have a relatively larger role than actin or microtubules because the rope-like fibers are very strong and are not easily depolymerized like the other fibers [4]. In epithelial cells, keratin IFs form a strong network that links cells to each other through desmosomes and to the extracellular matrix or basal membrane through hemidesmosomes [3]. The rigid nature of IFs also serves to maintain cytoarchitecture of certain cells. IFs in motor neurons control the axon radius while nuclear lamins maintain the shape and structure of cell nuclei [3,5]. Post-translational modification of IFs have been shown to control fiber solubility and depolymerization, which is used to alter the viscoelastic properties of the cell as it moves [6]. More recently, the interconnectedness of the IF network throughout the cell, nucleus, and surrounding cells or ECM has been shown to play a large role in signal transduction. IFs that connect to the cellular membrane or to other filaments like microtubules can transmit signals to the nucleus where different IFs can actually sort and regulate certain genes [5].

1968: IFs are recognized for the first time in literature to be distinct from microtubules and actin microfilaments (Ishikawa & Holtzer)

1972: GFAP is the first IF to be isolated and purified (Bignami & Uyeda)

1982: Keratin is the first IF to have its cDNA sequences (Hanukoglu & Fuchs)

There are more than 70 different intermediate filament proteins that have been isolated and studied [database]. IF proteins have been split into 6 different types based on the amino acid sequence and structure [4]. 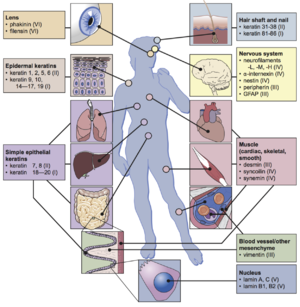 Types I and Type II are grouped together because they are both made from keratin. Keratin form obligate heterogeneous dimers with one acidic Type I strand and one basic Type II strand. The keratins are the largest and most well studied group of IFs, with more than 50 different keratin proteins that copolymerize to form fibers of varying hardness [1]. Mutations of kertain proteins can cause skin blistering disorders such as epidermolysis bullosa simplex [10].

Type III IFs are a diverse group that includes common IFs found throughout the body and can exist as either homopolymers or heteropolymers of different type III IFs. Vimentin is the most widely found IF, residing in almost almost all mesenchyme cells. Desmin plays a crucial role in the muscles while glial fibrillary acidic protein (GFAP) and peripherin are involved in the upkeep of nerve cells [1]. Desmin and peripherin mutations have been implicated in myopathies or neurological disorders like Alexander's disease [data].

Type IV IFs are the neurofilaments and internexin that develop and maintain correct neuron structure. The neurofilaments (NFs) are heteropolymers composed of three proteins of varying molecular weights [1]. NF mutations have been associated with neurodegenerative diseases such as ALS and Parkinson's disease [11].

Type V IFs are the nuclear lamins, which are unlike the other IFs in that they reside in the nucleus instead of the cytoplasm. The lamins have a slightly different rod sequence (slightly longer) and is thought to be more closely related to the common ancestor for all the IFs. The lamins form a mesh on the inner surface of the nuclear membrane that maintains its shape and structural integrity. The nuclear lamina also serves to anchor and physically connect the nucleus and the chromatin within to the larger intracellular environment [1]. Lamin mutations have been associated with many different disorders, one of which is progeria (also know as the premature aging disorder) [8].

Type VI IFs were the most recent to be studied and are sometimes considered nonstandard IFs rather than forming a completely new type. Phakinin and filensin are found in the lens of the eye [9].

The primary structure for IFs are very poorly conserved in general, especially compared to actin filaments and microtubules. This suggests that the exact sequence for the IFs is not as important as its ability to still form the same overall structure. The primary sequence follows a 7 residue repeat pattern where residues on one side of the tube will be nonpolar while the rest are mostly polar [12].

Almost the entire IF protein is in the alpha helix conformation. All the IFs share the same basic structure where the middle of the protein forms a rod (mostly helical) while the ends and several short linker regions of the protein have no distinct secondary structure [13].

IFs do not have a large degree of tertiary structure due to the rigidity of the helices. The regions on the end will fold to form globular structures and the linker sections in the middle will form characteristic folds. The overall structure of the proteins with globular end domains, three helical domains, and 2 linker segments is highly conserved [13].

Two parallel alpha helices will wind around each other in a left handed manner to form a coiled coil dimer with globular C and N terminal domains. The unusual primary structure aligns all the nonpolar residues on one side of the coil. These nonpolar strips will interact with each other to hold the dimer together. These dimers can be formed from two identical subunits or two different but compatible ones [4].

Two antiparallel dimers will associate laterally in a staggered fashion to create a tetramer, which is generally the working unit in the cell. These tetramers will then stack onto each other end to end to create a protofilament. The staggered C termini interact with the N termini above or vice versa. Unlike actin microtubules, IFs are not polar in that both of the filament ends are equivalent. 8 protofilaments will then associate laterally and twist into a rope-like microfibril [4].

3D structure of a vimentin dimer[13] 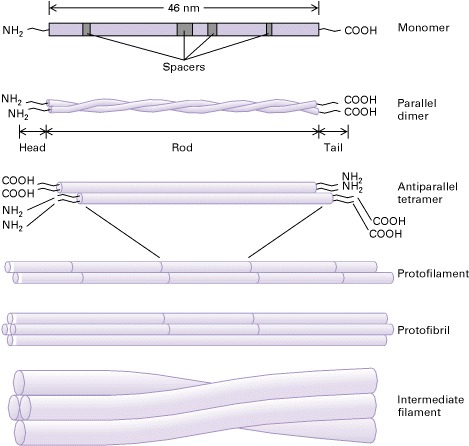 Because there is such a variety of IFs that are expressed in particular combinations in different cell types. IF analysis allows the origin of cancerous tumors to be elucidated [4]. Knowing the original type of cell could help find effective treatments to eradicate the cancer. Because IFs are important for cell motility and migration, they could play an important role in cancer metastasis. IFs also maintain the structural integrity of the cell, which could contribute to the resistance of cancer cells to apoptosis by common chemotherapy treatments like paclitaxol. Therefore, intermediate filaments represent a potential new target for cancer treatments [14]. However, it is still poorly understood how exactly altering different IFs would affect the cancer cells as well as the healthy cells.

Researchers from the Tianjin Medical University Cancer Institute and Hospital conducted this study to see what the connection between CK18 and non-small cell lung cancer may be. CD18 is cytokeratin, which is a kertatin that resides inside the cell rather than outside like hair. In the first part of the study, the researchers analyzed the levels of CK18 expression in 129 patients with non-small cell lung cancer. They found significantly positive correlations between CK18 expression and metastasis and severity of cancer. However, the researchers did not account for the inherent differences between the high and low expression populations when performing this analysis. By looking at overall and disease-free survival, they found that the 28 patients with low CK18 expression survived significantly more than the 101 patients with high CK18 expression (p<0.5). This suggests that high levels of CK18 expression in cancer cells allows them to better proliferate and infect the patient. In the second part of the study, two different strains of lung cancer cells had CK18 expression knocked down. These altered cancer cells had decreased migration and wound-healing ability. The altered cells also were more sensitive to paclitaxol, which suggests that CK18 plays a role in regulating cell apoptosis. These results demonstrate that IFs could potentially be exploited as new therapies for cancer treatment [15]. 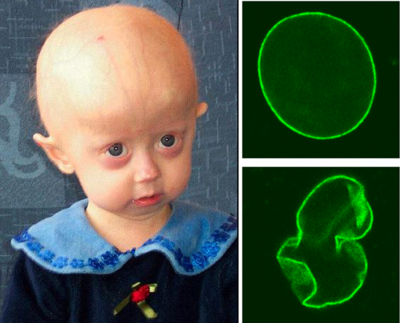 There is currently no treatment that deals with the cause of progeria, most treatments simply delay cardiovascular problems or other threatening health issues. Recently, however, there have been several farnesylation inhibitors (FTIs) developed that are currently in clinical trials to test their effectiveness in treating progeria. These FTIs prevent the farnesylation of prelam A, which prevents the buildup of progerin on the nuclear membrane and allows for relatively normal formation of the nuclear lamina. A trial run with a monotherapy of lornafarnib had promising results, with most patients gaining weight over the course of treatment. The most recent completed clinical trial investigated the safety and effectiveness of a combination of three drugs: lonafarnib, pravastatin (heart disease), and zoledronic acid (bone disease). Most of the patients showed improved weight loss and cardiovascular function while on this treatment. While the combination therapy is more effective at preventing bone loss than the monotherapy, no further additional improvement was seen in cardiovascular function or weight loss. A larger clinical study is currently in process of being planned in order to more extensively test the effectiveness of this combination therapy and see the more long term effects [16].