In Vivo Mechanical Stimulation of Tissues by Tyler Russell 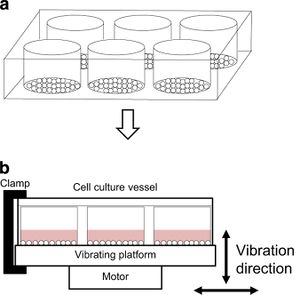 Device for in vitro mechanical stimulation of osteoblasts through the use of vibration.

The concept of mechanical stimulation of bone cells can be traced as far back as the 1920's. Prior to this time, it had been established that bone tissue benefited from being placed under a load or strain, and was made stronger as a consequence. This led to the concept of dynamic mechanical loading, which was suggested to be superior to static loading of bone tissue by scientists such as Jores, and Loeschke and Weinnoldt [3]. This dynamic loading, in contrast with static or continuous loading, of force was believed to elicit an osteogenic response. Studies of dynamic mechanic loading compared to static mechanic loading were not performed until the late 1960's and early 1970's by Hert et. al. as well as Chamay and Tshantz [3]. These early studies were performed in vitro and all came to the same conclusion: static load did not promote osteogenesis in animal bone the same way that dynamic loading did. [3]

In the mid 1990's, it became apparent through the work of Turner et. al. [4] that increased osteogenesis was proportional to the rate of strain that the osteoblasts experienced, or in other words the frequency that the load was applied. This rate was a greater factor in bone proliferation than the magnitude of the force itself [4]. This conclusion would lay the ground for future experiments with mechanical stimulation and bone tissue, both in vivo and in vitro.

As it was clear from studies done in the 20th century that a dynamic mechanical strain was optimal in bone tissue stimulation, the question then became how much stimulation would lead to the best environment for osteogenesis? In a study performed by Nagaraja and Jo [5] it was found that the applied load of a mechanical force must not exceed the bone tissue yield, which was found to be 7000 microstrain. The strain commonly placed upon the bone of many animals does not ever exceed 2000-3000 microstrain [5]. Noting this, the maximum mechanical strain used in the Nagaraja and Jo study was approximately 20000 microstrain. The study also defined an interesting equation, one that characterizes the stimulus provided by a dynamic mechanical strain:

It can be noted that this equation illustrates why a static mechanical strain does not provide the same stimulus as a dynamic strain. In the stated situation, f would be equivalent to zero, and therefore there would be no stimulus.

Although the human body often possesses the ability to heal itself on its own, the healing process can be quite slow, and sometimes incomplete. Bone has the ability to heal fairly completely from most injuries, though over a very long period of time. The combination of in vivo mechanical stimulation with the human body's own ability to heal seems to expedite the normal process of healing. As well as potentially expediting the healing process, mechanical stimulation of bone tissue in vivo has been shown to lead to a more efficient healing process as well [6]. The results of an in vivo study performed by Guldberg et. al. using the Hydraulic Bone Chamber (HBC) suggested that bone repair could be positively influenced by a mechanical stimulus. The figure below displays three biopsies, one from bone that had received in vivo mechanical stimulation from the HBC (middle) and the other two were from control samples (left and right). The sample that had received stimulation displayed a greater increase in trabecular area covered with procollagen-positive osteoblasts, correlating with increased trabecular density and connection. Consequently, the bone in the HBC stimulated sample did not only proliferate faster, but it would seem to be more resistant to deformation[ due to the trabecular thickness and connectivity. [6]

In addition to showing promising results for the healing of bone injuries, the increased thickness of the trabecular bone in the HBC biopsy shown by Goldberg et. al. could provide hope for those living with osteoporosis and low bone density. Due to osteoporosis and disuse, millions of Americans experienced reduced bone density every year. A similar phenomenon is experienced by astronauts, as the low gravity situations that they experience cause the body to adapt by losing bone [5]. The future could be bright for those suffering from such an affliction, as in vivo mechanical stimulation of bone tissue could potentially help to solve the problem.