My PhD research (2005-2009) has focused on identifying genes that are involved in the process of tip growth. Root hairs are an ideal cell type to investigate polarized cell growth in eukaryotes because they are genetically tractable, transparent, and accessible. Root hair growth requires the coordination of an array of cellular processes that need to work in unison to create a straight, precisely dimensioned cellular outgrowth.

By combining two independent microarray experiments comparing hairless roots and roots with root hairs, a candidate list of 150 genes that are statistically upregulated in root hair cells has been created. The table below represents all the functional categories that are overrepresented in the tip growth transcriptome compared to the genome. It includes many functions that are essential for rapid cell growth.

A comparison of the frequency of genes in selected gene families or functional categories within the Arabidopsis thaliana genome (defined as the 22 746 genes on the ATH1 GeneChip®) with the subset of 150 upregulated root hair genes. The frequency of genes in the selected gene families in the genome were compiled from various MATDB tables (http://mips.gsf.de/proj/thal/db/tables/tables_func_frame.html) and TAIR database searches (http://www.arabidopsis.org). P-values tending towards 0 relate to a decreasing probability that the values for genomic and subset gene frequencies are the same using the one tail Fisher’s exact test (Preacher & Briggs, 2001).

The table below summarises the overrepresented gene functions in the 86 genes downregulated in root hairs during tip growth. These include responses to external stimuli, which could possibly be due to the cell focusing more cellular resources on tip growth at the expense of defence. A suppression of genes that react to ROS is also evident, which may be required due to the abnormally high levels of ROS seen in root hairs. Unsurprisingly flavonoid biosynthesis, which acts as blue/red pigment in flowers (and sporadically as antioxidants), is downregulated in root hairs.

In order to assess putative functions of the candidate genes in the root hair transcriptome, SALK insertion lines will be used to screen for mutant phenotypes in root hair morphology. Initial screening of the most upgregulated gene in the candidate list shows several mutant phenotypes including bulging root epidermal cells, wavy root epidermal cell files and curly lateral roots. 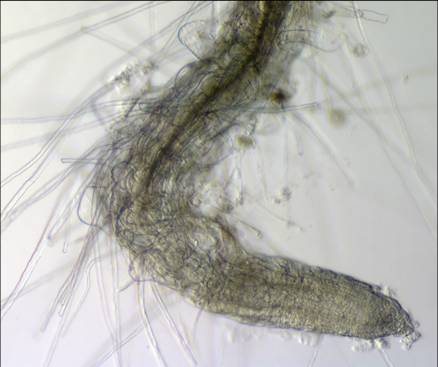 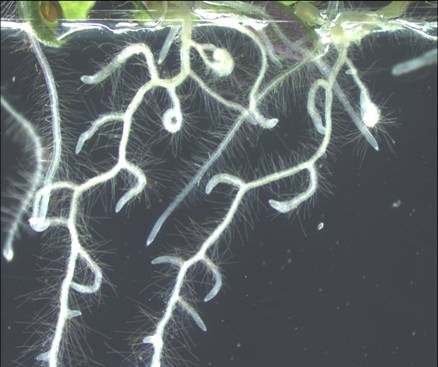 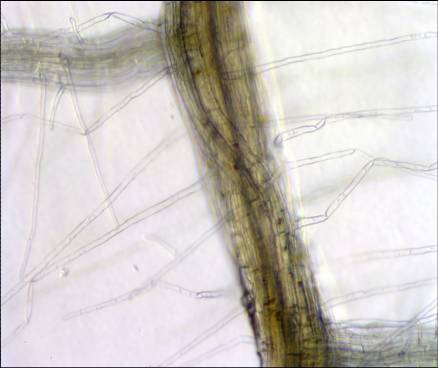