The idea for our project grew out of one for a "bacterial maze," in which bacteria would use logic to make their way through a microfabricated labrynth. This seemed slightly too difficult, so we linearized the the concept and added transfer of a signal; the idea was then dubbed a "bacterial relay race."

As in a conventional relay race, the signal is to "go," or induce motility of a latter stage participant. This is accomplished by passing a baton. In our case, the participants are E. coli, and the baton is a quorum sensing molecule, 3OC6HSL (we developed another strategy that utilizes conjugation rather than quorum sensing to mediate the signal).

The second leg of the race must remember to keep running; this is easy because they are gripping a baton. Our HSL baton, however, degrades over time. Thus, it is important to for the second cell to retain memory of the signal event. We incorperate this feature into our design by introducing a switch, which, barring sufficient stochastic fluxuations, should remain in the off state until prompted into the on state by the signal.

Under control of the switch is a GFP reporter and MotB, the latter a protein linking the torque machinery of the flagellum to the cell wall. By placing our system in a motility-comprimised strain (i.e. MotB K/O) and complementing it with the functional copy of the MotB listed above, we are able to induce motility. 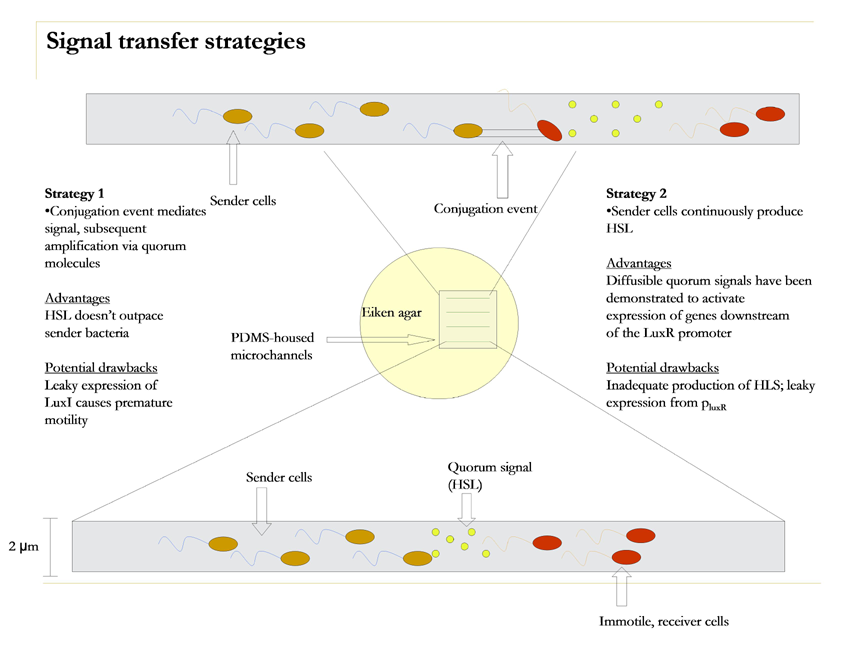