The aim of that subproject is to find a way to launch the destruction of either the construction or the organism after a certain laps of time.

Here we report the idea we have, and how we could make them real.

Here, we would place alginate beads, with controlled alginate matrix size into the capsule. The alginate beads contains theophylline, that would act as an activator of a riboswitch that would repress gene expression [1]. On of our options is to deliver theophylline through bits of complex sugars that would be the carbon source of our bacteria. The riboswitch would be fused into the 5' end of the gene we want to repress (see figure 1). That gene would be one of the colicin gene, that can diffuse and kill other Enterobacteriaceae. The riboswitch will be translated, and thus we need to ensure that it will not affect the function of the protein. The colicine gene is under Rpos promoter which is activated when bacteria is on stationary phase (e.g. YiaGp). So, bacteria will die on stationary phase and when theophylline is under a certain threshold, thanks to its diffusion through beads and capsule. However, we need to ensure that the expression of this toxin protein is very repressed and that it will not affect the fitness of the bacteria as long as it is in stationary phase with theophylline. If possible, we would like to try to replace the nuclease domain of the colicin gene with a restriction enzyme domain to target exclusively the synthetic genes carried by the plasmid. 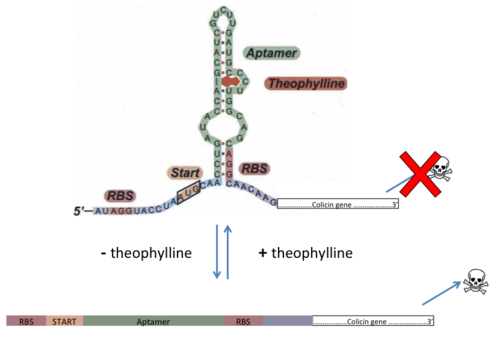 To achieve a strong repression of the colicin expression (and avoid the problems linked to its toxicity for the cell), we want to couple a repression at the level of the promoter (yiaGp is transcribed only in stationnary phase) to a post-trancriptional control using sRNAs. To do so, we will adapt a previously decribed system [1]. We hope to build and characterize the following design.

We will use the leader sequence of OmpF (a porine). The authors of the article found a post-translational repression of up to 145-fold.