This will most likely be our inaugural project as the JHU iGEM team. It's it's doable, relatively simple, and best of all, practical.

First, some backround info: Yeast is a Eukaryotic organism that lives as both a haploid and a diploid. The two “sexes” of yeast are only expressed in haploid form and are MATa and MATα. MATa cells secrete a factor and have α factor receptors on their membranes. Likewise, MATα cells secrete α factor and have a factor receptors on their membranes. Mating in yeast is diagramed below: 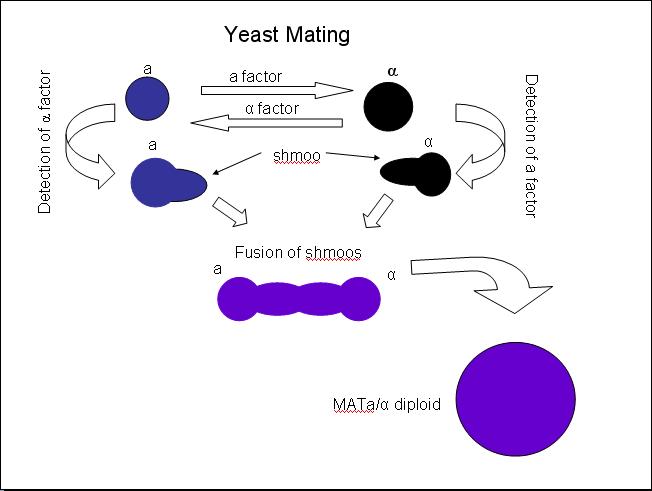 Once yeast mates and becomes a diploid, it suppresses all mating genes and no longer secretes mating factors. However, if the yeast is exposed to starvation conditions, it will replicate its genome temporarily becoming a 4n cell and then undergo meiosis to form a tetrad of 4 haploid spores, 2 MATa and 2 MATα.

When yeast is one of the two sexes, it is constantly secreting its respective factor. This means that on a genomic level the gene for its sex is active and the gene for the opposite sex is being suppressed. Each factor has a corresponding promoter region in its genomic code and the plan is to couple the gene for a fluorescent protein to each of the two factors. We have 10 different colors of fluorescent protein genes that have been codon optimized for yeast at our disposal thanks to Dr. Boeke, so we have plenty to choose from. This should yield a different color for the two sexes at the cellular level since only one of the two promoters is expressed at any one time. When in diploid form, both promoters are suppressed so no new color will appear.

Since yeast is such a great model for Eukaryotic genetics, much of the focus of the research in genetics on yeast has a homologous human function. This project would allow for increased efficiency in the yeast genetics community, and thus could lead to more rapid elucidation of genetic phenomena, and in turn human genetics. This project will be useful as it currently takes about 2 days to assay the sex of yeast cells obtained after meiosis. This detector would allow for instant detection of different sexes, and thus save valauble time.