We propose the idea of a new interface between biology and computing. This new interface would allow a new standard in synthetic biology for networking between a computer and bacterial culture.

Our idea aims to remove the need to have human monitoring of a culture, and to instead create a standard automated process.

We aim to move away from the manual monitoring and control of experiments, to a more automated system, with user defined commands. 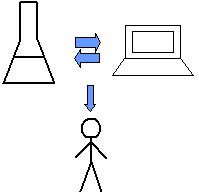 This new standard would result in the creation of a new toolbox of Biobricks, designed to be compatable with a computer. Like the standard Biobrick catalogue, these will be designed to a set of criteria - reusability, modularity, standardisation and now compatability.

The possibilities of such a system are endless. It would allow complete automation of biological experiments, and fine control using the computational processes to monitor feedback loops etc.

The input mechanism would be anything that is used to stimulate the culture to perform a certain function. For example, using microfluidics to add a certain amount of a transcription factor to stimulate expression of a certain gene.

The output mechanism would vary, allowing measurement of many different paramters of the culture. Possibilities include pH measurement, flourescence (GFP) expression related to gene expression, optical densitiy and colour (possibly used as a null driver for custom inputs). The aim would be to maintain the 'plug and play' functionality of traditional biobricks, whilst adding an increased level of control to the process.


These output mechanisms are designed to be compatible with inputs for the computer. In this way the system can be fully automated, with the computer responding instantly to signals from the cell culture. Programming of the software interface with usability in mind would give the possibility of adapting the settings for whatever inputs and outputs are desired.

The Big Picture: the Toolbox

The proper characterisation of various combinations of interfaces (or tools) would create a powerful suite enabling the biologists to computerize some aspects of data analysis.
Each tool would be composed of two halfs: the biobrick and the computational output as shown below, where BB and CI respectively stand for BioBrick and Computational Input 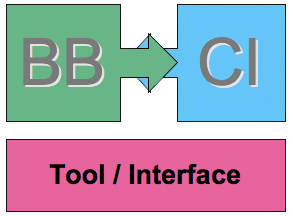 The biobrick standard is open-source, however in this toolbox, the CI (pH meter, turbidity meters...) are not. We aim to solve this problem via the creation of CIs from scratch.
These would be open-source as they would employ a readily available and immensely popular class of microcontrollers: Arduino (examples of these microcontrollers at the bottom of the page). Also, the kits are quite cheap and could potentially appeal quite strongly to the DIY community
This toolbox would not only comprise of "hardware" solutions but also contain "software" solutions that would link the different detectable variables to the major programming languages.
Applications for this particular last point are virtually limit-less. Ranging from Twittering bacteria (thanks Vincent) to automated email delivery when the bacteria are undergoing stress, potentially enabling the scientist to salvage weeks worth of experiments.
These particular applications have a great visibility factor and we think could be a great selling point for the more serious toolbox suite endgoal. 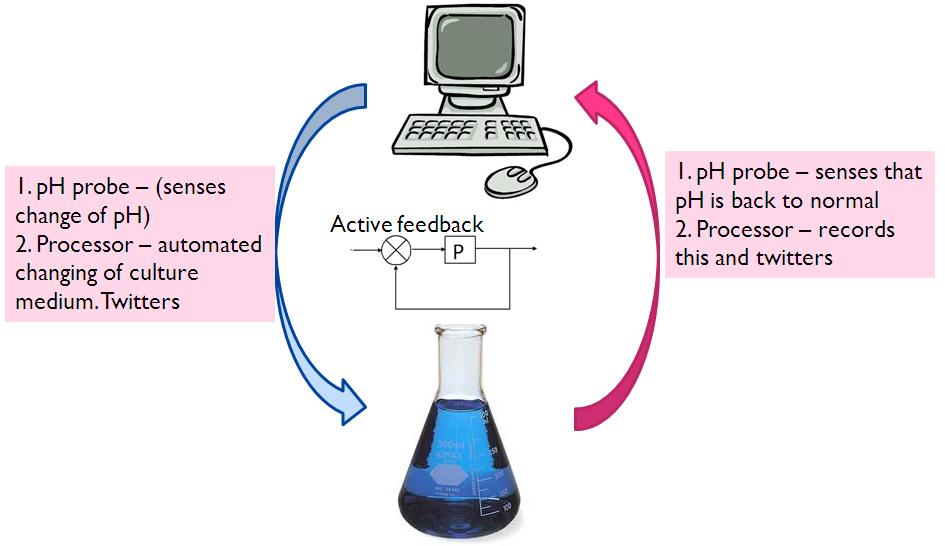 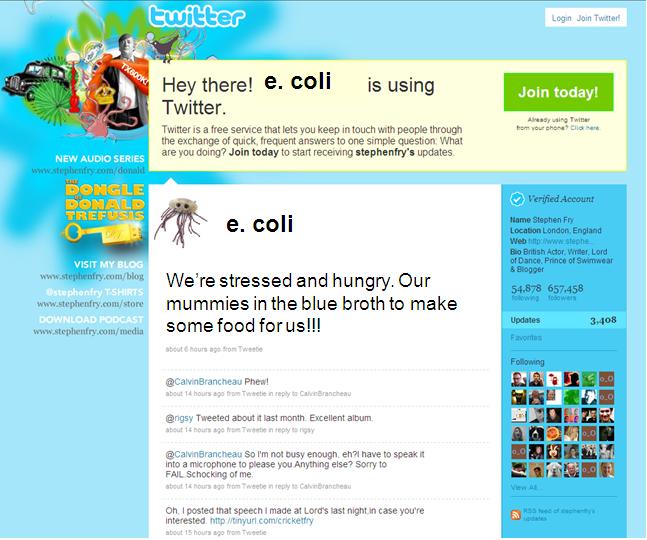 This is the simplest example of how we can apply the BIB system. Like a one 1-1 function in maths, this demonstrates interfacing between one cell culture with one processor. Here, pH of the cell broth is monitored. As the cell culture grows, it uses up the nutrient media and changes its pH (or colour). A pH meter (or colourimeter) is used to detect the change. A program is written that responds to this change in pH (or colour) by extracting the expired media and adding in the new media. In this way, the researcher can go on his holiday and not worry about his cells dying. Furthermore, the computer can send a twitter feed or email the researcher that new media has been added. 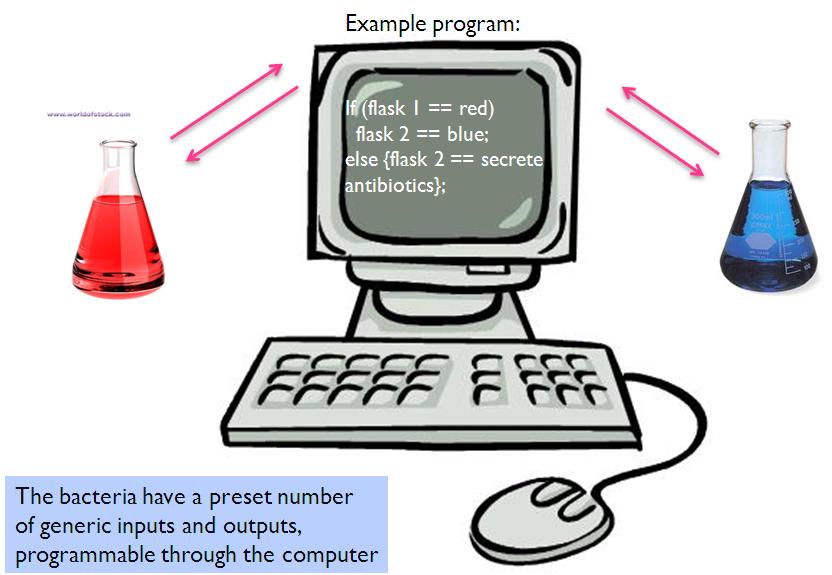 It could be conceivable to create a game based around this application of Information transfer. The popular Battleship game, when analysed more precisely is in reality an inherent exhibition of information transfer. Each player sends coordinates decoded by the adversary and that translate into a hit or miss. We could imagine two bacterial cultures communicating through a computer (or quorum sensing, signal subsequently analysed by the computer, to know what is going on). The first broth would make a first move by secreting a certain amount of molecule that would be detected by the computer. This would then "translate" or decode the information and equate into <....> Scrap that idea.

Mastermind rules/game In short, you propose a number of combinations and each time you do, the opponent (whose combination is hidden) answers in code fashion: one white peg for each colour that is correct but not in the right position, one red peg for each colour in the right spot. By doing permutations and thus suggesting combinations (trial and error approach) you should (that is if you haven't been lobotomised prior to playing) work out the combination. So now, the idea would be to implement that in cultures. I am no longer thinking about broths because it would be less handy for analysing output.
There are billions of ways to integrate this game. 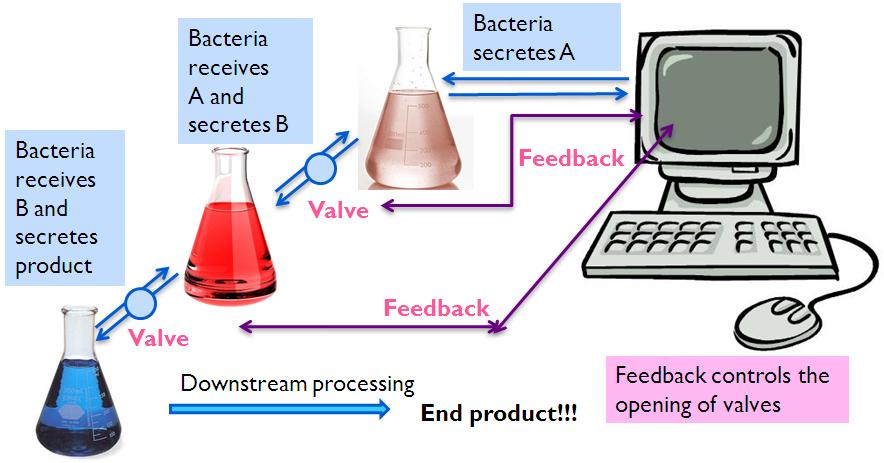 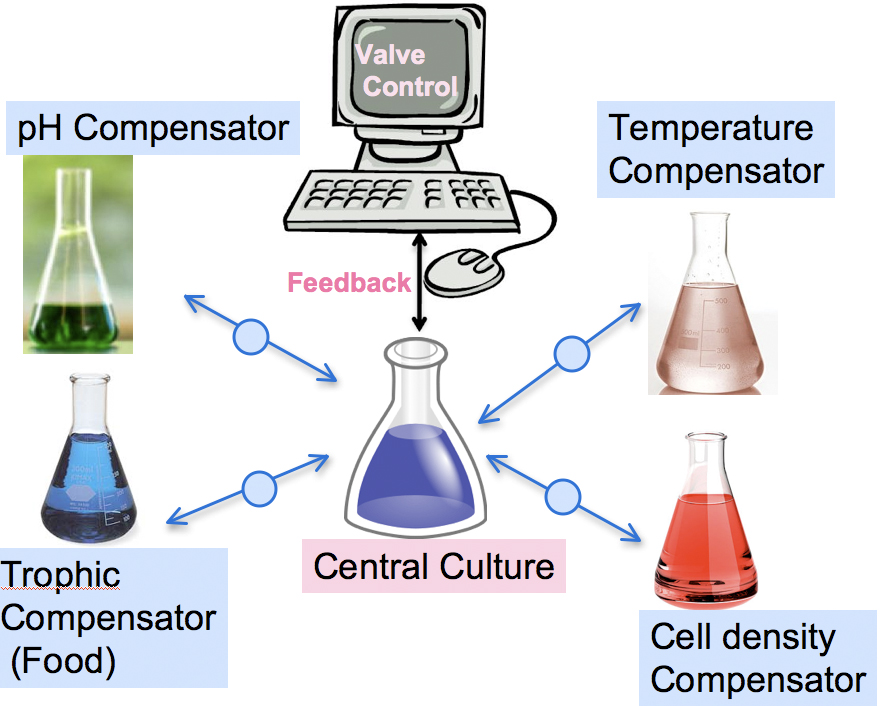 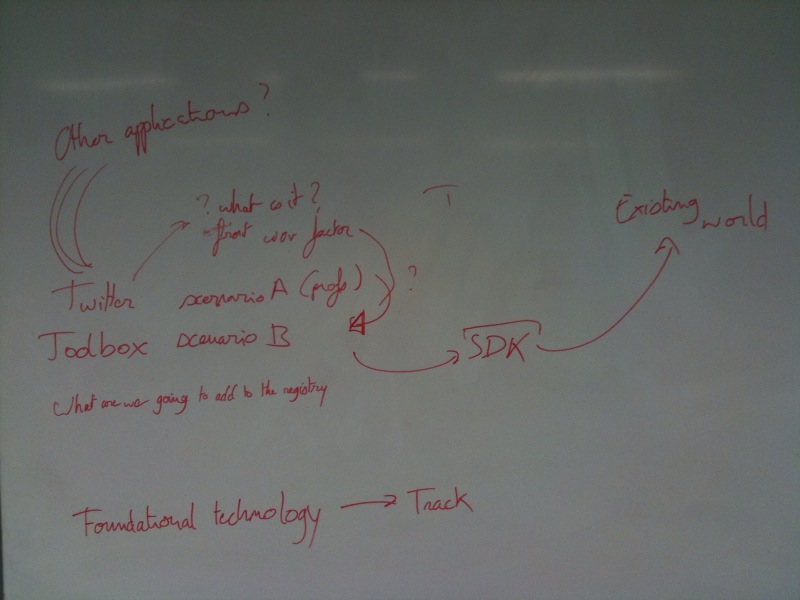 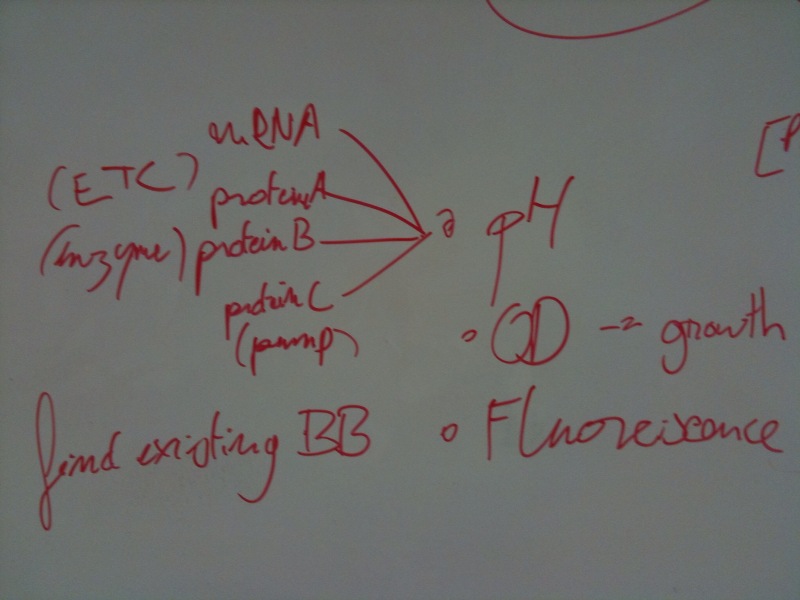 The aim of this project is to implement a supply-demand system to minimize stress incurred by a central culture.
In order to sense stress cues, we propose to use a number of existing biobricks (eg: BBa_K115035, TU Delft08) as well as creating a considerable number of them adapted to detect different signals (eg: Media:II09_EPA.pdf).
The bacterial output modules would allow to monitor environment variables at the molecular level. These sensors would result in the induction of a signal readable by computer assisted sensors.
This system would allow to predict (based on computer data analysis) stressful conditions and consequetly open the valve linking the stress-remediating and the central (futurely stressed) cultures.

The central culture's temperature is going up but the conditions are not stressful yet. A constitutively expressed temperature sensor linked to a luciferase output senses the shift in temperature and signals it through the computer interface.
As a result of temperature threshold crossing, the system starts sending a quorum sensing signal to the other flasks but the computer only operates the relevant valve. This accellerates signalling to induce the peripheral broth to produce the needed compound, in this case a Heat Shock Protein.