Here, there are 3 possibilities for the expression of the GFP, and these are shown below: 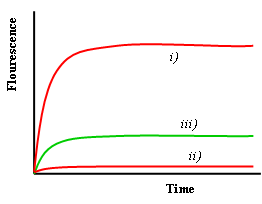 Measuring Cell Death by counting Colony Forming Units (CFUs)
CFU Method: By knowing the density of cells present in a media using OD measurements, and depositing a set amount of this media (and therefore a set no. of cells) onto an agar plate, we can know the proportion of viable cells still present in our colony after restriction enzyme production. This gives a quantifiable method for the calculation of the efficiency of our killing strategy.

A measure of viable cell numbers in CFU/ml (colony-forming units per millilitre).

We must ensure we do many repetitions to get reliable data

There is the potential to relate both measurement to obtain quantifiable data in terms of PoPS (see here).