Welcome to the Imperial 2008 iGEM team's main project page. It's Sunday, March 29 and a great day to read about a B. subtilis bioprinter!

I've uploaded our pitch presentation to Googledocs - you can view it here.

We aim to try and achieve the following aims, in order...

...then even if we didn't get all the way through each step is an important advancement for Synthetic Biology - from the first to the last.

As of 18/07/08 we're loosely divided into three teams of three - Tom, Krupa and Chris will be looking at B. subtilis and motility; James, Clinton and Yanis at light pathways and Erika, QQ and Prudence at biomaterial synthesis. Each sub-team has their own page to jot down notes and so on; if you come up with anything good, put it on this page in the relevant section too!

Of course, we aren't solely going to be on these teams - Everyone should get a chance to be in the wet lab, for instance, and we'll need to keep each other updated about progress. Additionally quite quickly teams will find they need to start working together, and at that point we can just amalgamate again. Like an amoeba. Sort of. ...anyway, if you come across anything another team might find useful add it to their page and perhaps make a note here?

The majority of the contents can now be found in the subteam 1 page, so try there :P 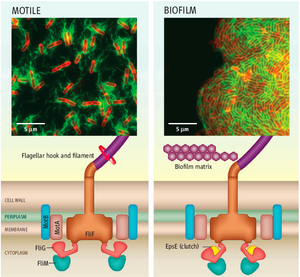 A schematic of the B. subtilis rotary flagellar motor is shown. Motile cells are powered by interactions of the FliG protein with the MotA/B complex (which generates torque). The protein EpsE acts as a molecular clutch to disengage the rotary flagellar motor, leaving the flagellum intact but unpowered. This shuts down motility and facilitates biofilm formation. Fluorescence microscopy photos of B. subtilis show bacterial membranes in red and flagella in green. FliM and FliF are motor proteins [1]

Here is a simple explanation of how the clutch system works: What happens is that the gene SinR upregulates the expression of flagellar genes i.e. MotA/MotB etc. and downregulates expression of biofilm forming genes. If SinR is absent, biofilm takes over and the bacteria loses its motility. It was found that SinR represses the EpsE gene, thus the absence of SinR causes the derepression of EpsE [2].

It was later determined that EpsE is responsible for disengaging the clutch in the flagellar motor [3]. This means that instead of turning the motor on or off, bacteria's motor is continuously spinning, but disengaging or engaging the flagella to the motor is regulated by EpsE and thus the EpsE gene. If we can characterise the EpsE gene, we should be able to control whether the bacteria moves or not, irregardless of its orientation, which brings us to the next problem.

2005 Penn State Uni team did a similar project, but they didn't use EpsE/SinR gene expression. Instead, they played around with the actual motor of the bacteria, motB gene which generates the torque required to give flagellum its rotating power [4].

Chris and I looked at a few light pathways in bacteria for mini-iGEM; mostly in E. coli, but there's interesting information in there nonetheless. I have a hard copy if anyone wants to look at it! ~ Tom Adie 15:31, 18 July 2008 (UTC) 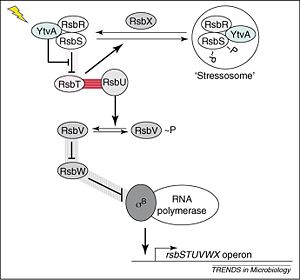 If one begins with a regular array of bacteria on a plate, the triggering of production and secretion of the biomaterial required could be linked to light - this could, conceivably, allow us to produce materials in a very complex pattern, and also allow gradients of production (should that be required). Repeating this multiple times for different layers could, therefore, allow us to build up a construction (not unlike a 3D printer [5]) of our material.

In 2000 a light-activated proton pump called Proteorhodopsin was discovered. In the absence of cellular respiration, this pump is activated by illumination, generating a proton motive force which drives the flagellar motor. However, there is no effect of light when respiration is not impaired, and there are no direct links between this light sensitive protein and EpsE which we are trying to control.

With respect to B. subtilis, the following were found: YtvA from B. subtilis is a flavo-protein related to the plant blue-light receptors phototropins. YtvA is a positive activator of the general stress transcription factor σB. In B. subtilis, the transcription factor σB controls more than 200 genes. Blue and not red light induces σB activity. We could use σB which is expressed upon blue light illumination to exert clutch control.
To understand the pathway in more detail we have looked at the other stress responses that lead to the activation of the sigma B. Please follow the link, stress response

Quorum sensing is a very valuable tool for this situation. With it we can trigger clustering or dispersal via a link to the flagellar motion of the bacteria (see the flagellar clutch below), and theoretically we should be able to arrange our bacteria in a monospaced array... This could be very useful for producing e.g. collagen or a similar product.

We will be testing a variety of materials in parallel with the characterisation of the control section.

Overview of our circuitry for the B. subtilis Bioprinter

The diagram on the right (click for larger image) shows a theoretical overview of the circuitry we'll be adding to B. subtilis in order to control its movement and expression profile.

The top row shows genes native to B. subtilis that may interfere with our aims. These include the endogenous epsE gene, producing the molecular clutch, and the associated sinR gene which inhibits it. The second row shows synthetic constructs which we will add that are to be constitutively expressed and the third row shows synthetic constructs that we require to be inducible. Genes in green generally upregulate/promote transcription of some target whereas those in red downregulate/repress activity of their targets; lines showing interactions follow the same scheme. SinR, for example, inhibits the operon containing the epsE gene so the sinR gene is red. The gene for product production (or reporters) is coloured yellow.

The general operation of these constructs should fulfil our specifications, as the simple explanations below demonstrate...

As far as characterising parts goes (defining individual parts) we have made some headway. If we use the natural ytvA pathway, that activates σB; a transcription factor required for some promoters to operate. One of these promoters is pctc so if we use that as our inducible promoter, the natural response to light (which we can amplify by adding constitutive expression of those receptors) will kick the bacteria into the production state.

The ExpMach gene is a placeholder; should the biomaterial expression we are trying to output require any expression machinery, the genes for it will probably go here. They could be constitutively expressed with the ytvA and sinR genes but putting them here gives a time delay between the bacteria stopping and product being excreted which could be useful.

The constructs we have designed are polycistronic, B.subtilis translation of polycistronic genes however is not even. The first gene in a polycistron is often more highly expressed than the second even if they have their own individual Ribosome Binding Sites[1]. This may cause issues for our current circuit design but could be easily remedied by using multiple promoters in each construct or by the arrangement of genes along the polycistron.

The above presents a simple system whereby light stimulus acts as an input, regulating the output: bacteria motility. In order to characterise the clutch BioBrick, we have to look at modelling bacteria motility with respect to varying levels of light intensity and wavelength.

Traditionally cloning of exogenous genes in prokaryotes has used vectors for the maintenance of genes as exochromosomal elements. However, within the gram positive model organism, B.subtilis, there is a potential alternative. The use of integration vectors essentially allows the incorporation of exogenous genes within the host chromosome, rather than exochromosomal elements. This offers several advantages, firstly only one gene is present within each organism allowing a greater control of gene expression. Secondly, exogenous genes have been found to have greater stability when integrated into the chromosome. This is important for maintenance of our genetic devices over multiple rounds of division. Please click on the following link to learn more about integration of genes into the B.subtilis host chromosome.

Circuitry minus SinR. Description. Reorganisation of stuff further up this page? Test constructs have been decided, I think, so put these here too.

Summary of light detection and summary of biomaterials here?

Copy and paste from Word list (or link to page of same). Perhaps a number of links each to a page with protocol on? Or one of those show/hide boxes for each.

Current plan for project and parts. Any problems we've identified?