The characterisation of the parts and devices have been considered in terms of rate of gene expressing in the units Polymerase per Second (PoPS). However the characterisation of the chassis containing the expression systems has currently not been considered. If PoPS can be viewed as the rate of gene expression, then the chassis can be viewed as the potential power of expression. An analogy is between battery and a device, battery defines total amount of available energy and device requirements determine the rate at which this is used. Studying the same consructs in different expression systems will help us understand the advantages and disadvantages associated with an expression system. 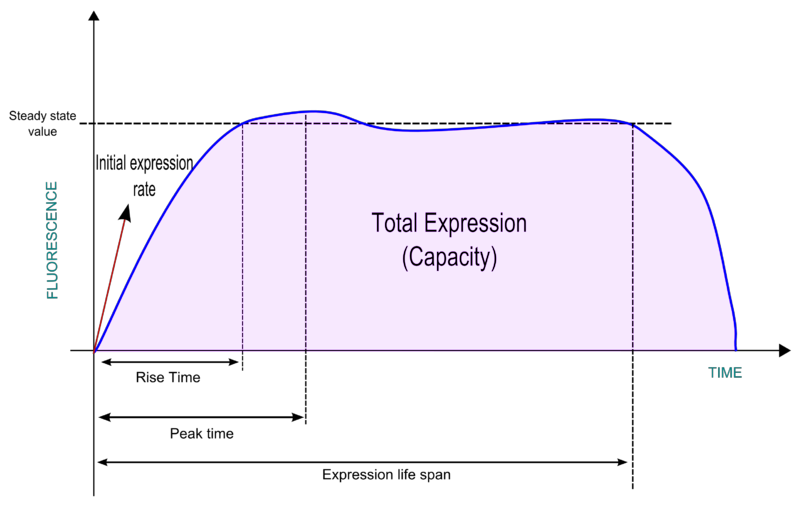 From a general point of view, you will have to specify the conditions in which you are planning to make your measurements, like the temperature for example (maybe some other stuff).

Measure of time that chassis is stable without expression, this is to give a measure of stability of stored expression systems.
specify storing conditions (-80c, -20c, room temperature, other parameters ?). After a storing time, how do you define that the system is still good to be used ? look into the discharge time of a battery.

Measure of the time that expression occurs for a given constructs until capacity reached, it is important to know when chassis will stop gene expression. ?Half life ? Or should that be a fall time ? It is important to specify clearly when you stop the clock.

A measure of the total expression of a chassis for a given construct, can be seen as the total 'power' of expression a chassis can produce. Need to work out total synthesis taking into account the degradation

Degradation of a normalized protein i.e. Green Fluorescent Protein, by measuring the half life of the protein. This is important if our application depends on protein production e.g. a visual response from GFP.
not shown on the graph

The rate of expression until steady state is reached. We can define the steady state and measure how long it takes to achieve this. What happens if there is no steady-state ? You need to consider both cases

The first time at which our system reaches the maximum level of expression Maximum or steady state ? graph not clear

The first time at which the rate of increse of expression is equal to zero. How different is it from the Rise time if there is no steady state ?

Containment of the expression system e.g.test tube, and any media that is required.

An indication of the cost of each expression system.
per volume of extract

Measure of standard deviation of the measurements above. This will show how reliable the system to give a standard response.